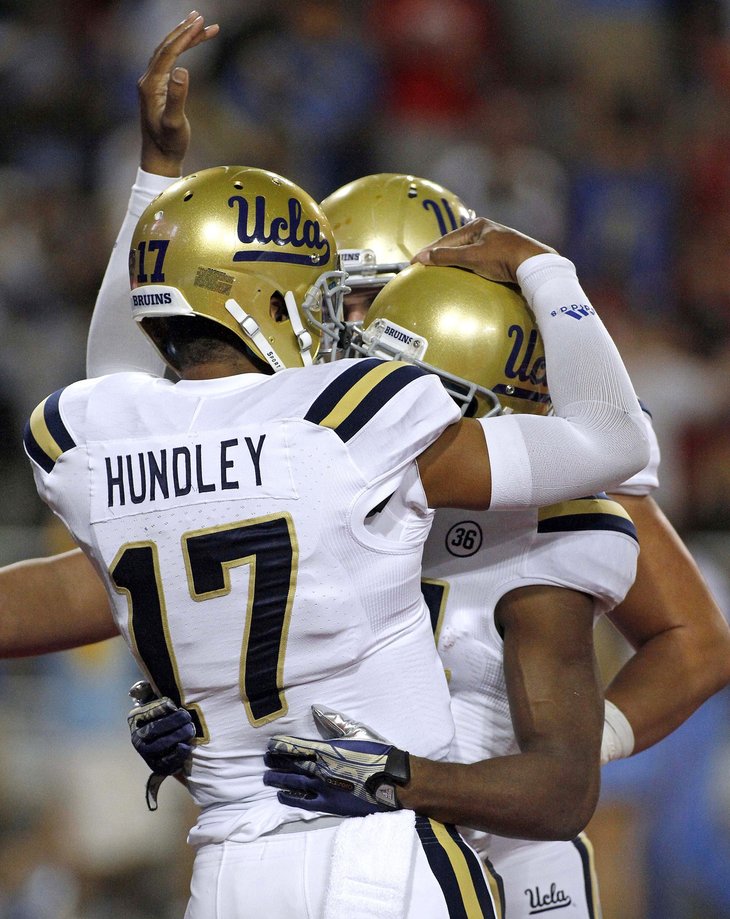 What a game in Arizona on Saturday night!  The Bruins and Wildcats had a showdown that was more wild than spring break in Cancun.  UCLA hung on for a sketchy 31-26 win, and won in Tucson for the first time in 10 years.  The Bruins raced out to a 24-10 lead, before the Wildcats mounted a furious comeback.  Fortunately for UCLA, they were rescued by freshman linebacker Miles Jack, who appears to be the Bruins version of Yasiel Puig.  Jack rushed for 120 yards and a touchdown, on only 6 carries, while playing on both sides of the ball.  As mentally tough as the Bruins appeared to be on Saturday, this team appears wildly inconsistent at times.  Their remaining schedule is a minefield, with games at home against Washington and Arizona State, followed by a showdown at the Coliseum with the Trojans.  The Bruins still control their own destiny in the Pac 12 South, but they aren’t making things easy on themselves.

Meanwhile, the Trojans are a different team after pounding Cal 62-28.  Even though the Golden Bears are golden garbage at this point, did anybody expect USC to be 7-3 after Lane Kiffin was fired?  The mere fact that Kiffin left Javorious Allen chained to the bench should have been enough to fire him.  Ed Orgeron has completely transformed the offense into what it was supposed to be at the beginning of the season, and suddenly, Cody Kessler doesn’t look completely inept.  SC will probably get crushed by Stanford next weekend, but their matchup with UCLA at the end of this month is looking more and more exciting by the minute.

I’d like to take this opportunity to thank Tommy Rees for shattering the hopes and dreams of Notre Dame fans, who were hoping the Irish would earn a BCS Bowl berth this season.  Rees was once again, a turnover machine on Saturday night against Pitt, and successfully self-destructed when it mattered most.

On to college basketball, where very quietly, the Bruins and Trojans opened the season on Friday night.  Both teams are beginning new coaching eras, and neither one got off to very impressive starts.  The Bruins barely beat Drexel in Steve Alford’s debut at Pauley Pavilion, and Alford’s run and gun offense was slowed to a crawl.  The Bruin faithful clearly expressed their displeasure with the Alford hiring, since less than 6,000 people actually showed up to watch it.  The new Trojan run and gun offense wasn’t too successful either against Utah State, as the Andy Enfield experiment began with a pathetic 37% shooting night.  It feels like most Bruin and Trojan fans are conveniently in denial that their teams have started the season already.

Week 2 of the NBA season is in the books, and I’ve gotta admit, I’m concerned about the Lakers.  I’m concerned that they might actually be better than I thought.  I’m concerned that they may not be in the lottery, and actually make the playoffs.  I’m concerned that Mike D’Antoni will be the coach beyond this season.  Even after getting a beat down from Minnesota last night at Staples, I’m still worried the team isn’t going to tank hard enough.  There’s also been rumors of a Steve Nash trade to Toronto, which would be amazing, but unlikely.  Even Canada isn’t dumb enough to take Steve Nash off the Lakers hands, when the guy can barely get up and down the court.  As enjoyable as the victories over the Clippers and Rockets have been, things could get really ugly in the next few weeks for this team.

Then there’s the Clippers, who have left many people scratching their heads after beating Houston twice this week, and losing to Miami and Orlando.  Isn’t this team supposed to be much better defensively now that Doc Rivers is their coach?  Aren’t they supposed to actually have a half-court offense too?  We’re only 7 games in, but remember, Donald Sterling is paying Doc Rivers more money than he’s ever paid a coach, and his payroll is as high as it has ever been.  That also means Sterling is going to be a harsher critic on these guys than ever before.  I don’t think anybody expected the Clippers defense to be the worst in the NBA, and at the moment, that’s where they stand.

Ladies and gentleman, thank you very much.  I’ve been saying for weeks that all the LA Kings need to do in order to fix their offense is call up youngster Tyler Toffoli.  Sure enough, in just two games, he’s tearing it up, along with rookie Linden Vey.  The only reason Toffoli should return to Manchester, is to pick up the rest of his belongings and move them to LA.  As for the Ducks, they continue to roll, winners of 5 straight, and still undefeated at home.

It’s amazing how stupid fans drunk fans can be.  Check out Winnipeg Jets defenseman Adam Pardy getting his helmet ripped off by a drunk fan….

A few quick NFL thoughts.  Arian Foster has suffered a season ending back injury, which was the result of carrying the Texans on his back all these years.  For a while it looked like the Chargers might be on their way to sneaking into the playoffs.  Now, they are on the verge of having their season slip away, and Mike McCoy looks like he’s in over his head with play calling duties.

I think there’s one thing that we are all thinking about this Miami Dolphins situation: What kind of dumb ass name is Richie Incognito? But in all seriousness, the fact that Jonathan Martin is willing to walk away from football over this, tells you the Stanford grad knows he has a future after football.  Meanwhile, Richie Incognito has nothing, but a stupid name, and a stupid hazing incident to explain to people.  Martin handled things with dignity, but I think most of us would have punched Incognito in the face at this point.

Finally, The Walking Dead continued on AMC last night, and this latest episode was called “Internment”.  Spoiler alert for those of you who have it on DVR, and have yet to watch it.  To quickly recap, Hershel battles an outbreak of walkers, sickness, and poor spirits inside one of the prison cell blocks.  Meanwhile, Rick and Carl take down a pack of walkers with machine guns, Maggie learns that Carol was sent away by Rick, and the governor is seen briefly watching the prison at the end of the episode.

This episode wasn’t too eventful.  The big question I was wondering was what the group’s reaction would be to Carol’s departure.  After a full hour, we still don’t know much.  Hershel seemed too preoccupied with saving Glenn to have much of a reaction, and we still don’t know what Tyreese and Daryl’s reaction will be.  Maggie seemed supportive of Rick’s decision, but her approval or disapproval seems insignificant compared to Daryl and Tyreese.  Also, even though the show has a habit of killing off a significant character or two early in every season, I still was never really convinced that Glenn was going to die.  He seems like far too interesting of a character to eliminate from the show.  The Governor’s return was inevitable, and it will be interesting to see how he looks to get his revenge.