Wasn’t Mike D’Antoni’s coaching only supposed to get better this year?  We were told that he now has a handful of new players that are a “better fit” for his ridiculous system.  We were also told that he has a full training camp to figure out his rotations.  Funny, because through the first four games of the season, his coaching is far worse than last year!  Going into Sunday’s game against Atlanta, four of the Lakers five starters were shooting under 30% from the field.  It shouldn’t be hard to understand that Shawne Williams should never play, while Nick Young, Steve Nash, and Steve Blake shouldn’t be getting as much playing time as Jordan Farmar, Xavier Henry, and Jordan Hill.  Similar to last year, the Lakers season will probably be over by the time D’Antoni figures this out.  It’s a damn miracle that the Lakers are 2-2 after last night’s win against the Hawks.  Once again, in a game the Lakers should have put away in the first half, they nearly blow because Mike D’Antoni has no idea how to get his big men the ball inside.  Thank god for the Hawks ineptitude.

Meanwhile, the Clippers look about as solid as they did last year in the first week of the season.  JJ Redick and Jared Dudley are spacing the floor nicely for CP3, and the Clipps picked up two nice wins after their shocking opening night loss to the Lakers.  I still can’t really tell if Blake Griffin and DeAndre Jordan have learned how to play basketball yet though.  Tonight will be a good test for them against the new and improved Houston Rockets, who are 3-0 so far in the early going.

How angry must the Philadelphia 76ers front office be right now?  They were obviously trying to tank this season to secure another lottery pick, and they are off to a 3-0 start, including wins over Miami and Chicago.  I guess they didn’t expect Michael Carter Williams to look like the 2nd coming of Oscar Robertson.

On to college football where the Bruins rebounded on Saturday at the Rose Bowl.  Well sort of.  They defeated Colorado, which barely qualifies as a Division 1 football team these days.  Nevertheless, the Bruins can feel good about finding the win column after two tough weeks against Stanford and Oregon.  Brett Hundley returned to greatness throwing two touchdown passes, and rushing for two more.  Sure would be nice if the the Bruins could support Hundley with some improved play from their running backs though.  UCLA controls their own destiny, but has no margin for error left.  If they win their remaining games against Arizona, Washington, Arizona State, and USC, they’ll earn a trip to the Pac-12 championship game.  That’s no easy task, but I think it will confirm what we’ve all suspected:  UCLA has a good football team, not an elite one yet. 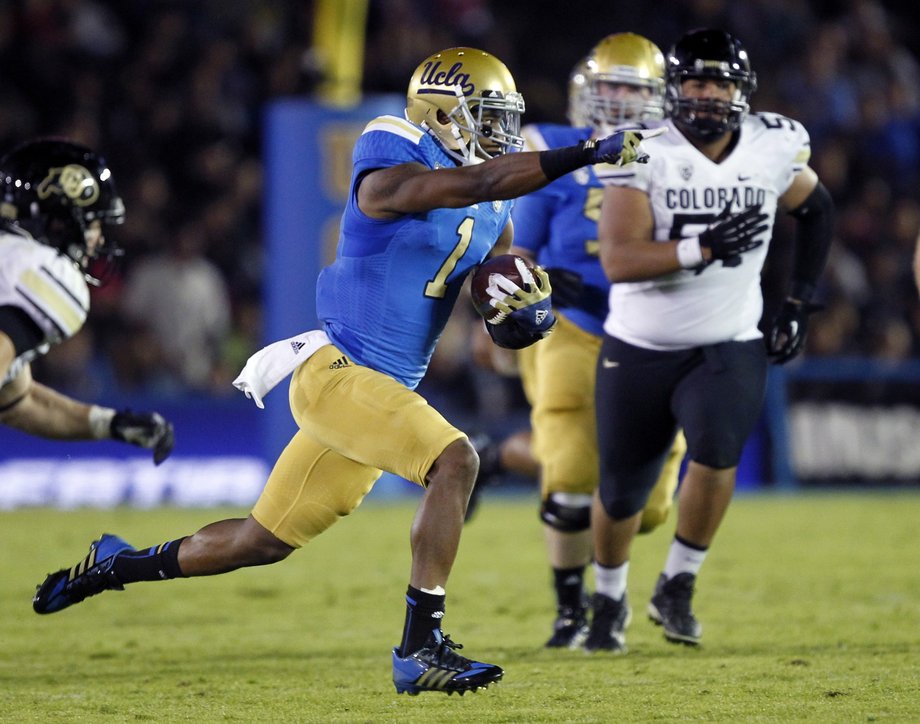 As for USC, they handled Oregon State easily on Thursday night, and now appear to be putting together a respectable season.  Whenever you’re talking Trojans and Beavers it just sounds dirty, so I’ll just get straight to the point.  USC is playing far more inspired football under Ed Orgeron than it did under Lane Kiffin.  The defense is playing with more energy, and the offense looks more confident.  SC will likely have to settle for a 2nd tier bowl game, but 8 wins is very realistic for a team that looked like a train wreck a month ago.  On the coaching front, rumor has it the Trojans have already interviewed Lovie Smith, and have Steve Sarkisian and Jon Gruden on their radar.  Smith is a big name, but has no college coaching experience.  The chances of Gruden being the next coach are about as good as the chances of me landing the gig.  That leaves Sark.  The question is whether or not he’s willing to abandon the progress he’s made at Washington.  He seems like an SC guy, and it makes perfect sense for both sides.

Let’s go to the ice where the LA Kings are about as hard to figure out as a jigsaw puzzle.  They flat out sucked on the road against Phoenix, they come up with a huge statement win against the best team in hockey, the Sharks, then they laid an egg against Nashville.  To make matters worse, Jeff Carter and Jarret Stoll are going to be out of the lineup for a while with injuries.  The penalty killing has been awful of late, and Jonathan Quick looks bored and uninterested, which is costing the Kings at inopportune times.  This looks like a team that is absolutely dominant at times, and totally unmotivated at others.  Maybe they are pacing themselves, but they are going to have some ground to make up in the standings if they keep it up.  Ugh…..at least Tyler Toffoli is back in the lineup.

Then there’s the Ducks who keep losing forwards, but keep finding the win column.  Anaheim has lost Jakob Silfverberg, Teemu Selanne, Dustin Penner, and Saku Koivu, yet they’re in 1st place in the Pacific Division.  Even more amazing is the fact the Ducks are doing this with terrible special teams.  Their powerplay is 29th in the league and their penalty killing is 30th.  Still, they’re finding a way to win on the road and dominate at even strength.

Speaking of the Kings and Ducks, I’ve been a little torn of late on what to do about this outdoor game at Dodgers Stadium in January.  I’ve been bitching for years about how the NHL needs to do an outdoor game in So Cal, and was very excited when I found out we were awarded one.  Naturally, I thought it was a no brainer that I had to attend.  The problem, the best seats in the house are going to cost me nearly $300, and that’s going to be like watching a hockey game from the 300 level at Staples Center.  On the other hand, for the same price, I could watch the Kings take on the Penguins at Staples Center just 5 nights later, and practically be sitting on the glass.  It’s no easy choice folks.  But will anybody be able to see anything at Dodgers Stadium? You tell me?……

The baseball offseason is upon us, and the Dodgers are working hard to sign their ace Clayton Kershaw to a long term deal.  However, Dodger fans should be experiencing shortness of breath after Kershaw said he was starting to get “curious” about testing free agency as it approaches.  LA simply can’t let this guy test the market.  The entire league will be bidding on him, and Arte Moreno proved a few years ago, it only takes one moron to pay up and you lose your star player.  Even Kershaw seems uncomfortable with the idea of a 10 year $300 million deal.  If he wants a shorter deal, give him a shorter deal, but don’t let him test the market!

Some quick thoughts on Week 9 of the NFL.  Texans coach Gary Kubiak must be able to see the future.  He collapsed at halftime of last night’s game against the Colts.  His team was leading 21-6 at that point, but then collapsed in the 2nd half, and lost 27-24.  In all seriousness though, the NFL needs to consider putting a limit on how much time these coaches can spend in the office.  Broncos coach John Fox collapsed a few days ago as well, which should tell you that NFL coaches work loads have to be addressed by the league.

And finally, Season 4 of The Walking Dead continued on AMC last night with episode 4, called “Indifference”.  Spoiler alert for those of you who haven’t seen it yet.  To quickly summarize: Daryl, Michonne, Tyreese, and Bob, succeed on their run for the medicine.  However, it’s revealed that Bob simply came on the run to find booze, and satisfy his alcoholism.  This revelation makes Daryl the angriest we’ve seen him in a long time, and he lets Bob know he should have never joined their group at the prison in the first place.  Meanwhile, Rick and Carol go on a supply run of their own, and along the way, they meet a couple that has come together during the zombie apocalypse.  Sadly, the couple doesn’t survive long after we are introduced to them.  Rick eventually expresses his disapproval of Carol’s actions, in which she killed Karen and David, to prevent others from getting sick.  Rick then explains to Carol that Tyreese will kill Carol when he finds out what she did, and that he doesn’t want to lie about her actions.  Thus, he banishes her from the group.

It’s hard to imagine that this is the last we have seen of Carol.  The question is: where will she turn up next?  I could easily see her teaming up with what remains of The Governor’s group, or even the Governor himself.  You’ve also gotta wonder how Daryl is going to feel about what Carol did, and her departure.  I suspect he’ll be pissed, but mostly because he thought he was going to get laid for the first time in forever.  The most powerful moment of the episode actually turned out to be the opening scene, where Carol said goodbye to Lizzie.  We hear Lizzie say “One day you just change; we all change.”  This mirrors exactly what we’ve seen from Carol since season 1.  She has transformed from a battered housewife, to a woman willing to recklessly save the lives of everyone she cares about.  In many ways, this mirrors a major theme of the show, which is how almost all of the main characters have changed.  A slower episode, but still a powerful one.