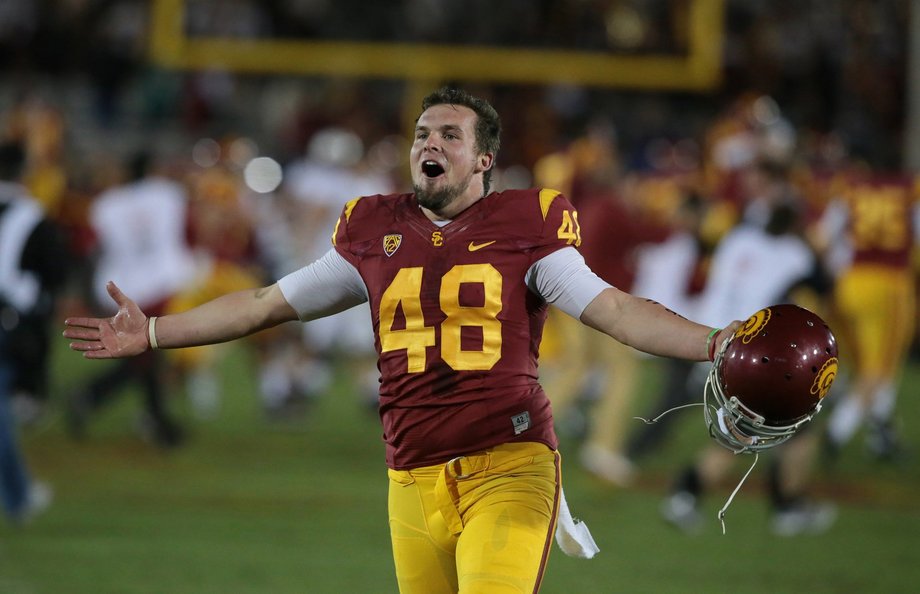 What a scene at The Coliseum on Saturday night.  The Trojans shocked the college football world by knocking off #5 Stanford 20-17, and it was kicker Andre Heidari, who secured the win with a 47-yard field goal with 19 seconds left.  Moments later, the Trojan fans rushed onto the field to celebrate with the players.  The SC offense was just sturdy enough, but it was the defense that came up huge again, including two huge 4th quarter interceptions.  I can’t believe after all this Kiffin drama, the Trojans could still win the Pac 12 South and end up in the Rose Bowl.  USC is now 5-1 under Ed Orgeron, who is making a strong case to be the head coach for the long run. If he beats Colorado and UCLA, Pat Haden has to give it strong consideration.

Orgeron has completely re-energized his players, and has done a great job preparing and implementing game plans.  But let’s not lose perspective here.  He was 10-25 in his only previous head coaching job at Mississippi, and simply giving him the job after a few nice wins would make Pat Haden a prisoner of the moment.  A full season under Orgeron would probably feel a lot like the Paul Hackett years, which most Trojan fans like to forget.  USC needs to explore its options with the likes of Chris Peterson, Jon Gruden, and even Jack Del Rio before considering Coach O.

Meanwhile, UCLA handled Washington 41-31 at the Rose Bowl on Friday.  Freshman linebacker turned running back, Myles Jack, scored 4 touchdowns on 13 carries, and should never play on the defensive side of the ball again.  Jack is the 13th player in Bruins history to score 4 touchdowns in a game, and the first defense player in the last 10 years in college football to accomplish this.  The Bruins will need Jack and Brett Hundley to come up big in their final two regular season games against ASU and USC.  Bruin fans should be very nervous about those matchups, especially with what took place at The Coliseum on Saturday night.

The rumors that are surrounding the Dodgers have me very concerned.  First of all, why the hell hasn’t Clayton Kershaw signed an extension yet?  The Dodgers reportedly offered him a 10 year $300 million deal, which he wasn’t comfortable with.  It’s obvious the Dodgers can pay him more than anybody else, so if he wants to be in LA, why hasn’t he signed?  Kershaw recently said he was becoming more curious about free agency as it approaches, which makes me think he isn’t sure if he wants to be here.  Then there’s the Matt Kemp rumors.  The Dodgers and Rangers reportedly had discussions about Kemp and Elvis Andrus at last week’s GM meetings.  Look, I get it.  The Dodgers have an extra outfielder and could use another infielder.  The Rangers have an extra infielder and could use another outfielder.  However, that doesn’t mean the Dodgers should trade a $100 milion superstar, for a $100 million underachiever.  Andrus is a useful defensive player that gives you nothing offensively. Give Kemp a chance to get healthy again and be the player we know he can be.

The Lakers got back in the win column last night against the Pistons, and Jordan Hill was a beast, scoring 24 points and grabbing 17 rebounds.  This is probably going to be a lost season for the Lake Show, but they have probably found a few useful players they should look to keep beyond this season: Hill and Xavier Henry.  As for the Kobe watch, even though he’s returned to practice, he’s still a few weeks away from returning to action.  Do you really want him to return to action this soon though?  Let’s be honest, after watching Duke, Kansas, and Kentucky play on ESPN earlier in the week, I’m sure many of you are drooling over the thought of the Lakers having a lottery pick and drafting the likes of Andrew Wiggins, Jabari Parker, or Julius Randall.  Each of those players look like they are going to be franchise changing players.

Meanwhile, the Clippers are rolling.  They’ve won 4 straight games, including victories over Brooklyn and Oklahoma City.  At 7-3, the Clipps look good on paper, but I can’t say I’m sold on them being a championship team yet.  Typically, championship teams are in the top 5 in defensive field goal percentage, defensive rebounds, and in turnovers.  The Clippers are in the bottom half of the league in all of these categories, which is very surprising for a team coached by Doc Rivers, who hangs his hat on defense.  Until further notice, this looks like a team built for the regular season.

To the ice, where the Kings are doing an amazing job staying competitive given all the injuries they are dealing with  I think the entire season flashed before my eyes when Jonathan Quick went down  with a groin injury.  He’ll be out for 4-6 weeks, but “The Professor”, Ben Scrivens, has been solid in his place with two straight shutouts.  LA has won three straight, all coming on the road, and they are getting great production from their rookies as well.  The Kings are 7th in the West, but their conference is so stacked, they currently have more points than every team in the Eastern Conference.

As for the Ducks, they’ve lost three straight games on the road against those lowly Eastern Conference opponents.  I think the question the Ducks need to ask themselves is whether or not they need Jonas Hiller.  Hiller is a very average NHL goaltender that benefits from a team that scores a lot of goals.  If the Ducks act quickly enough however, they can probably trade him for a tough defenseman, or a gritty two-way forward, which they desperately need.  There are also plenty of teams out there in desperate need of a goaltender, like Nashville and Edmonton, who would probably be willing to take the chance on Hiller.

A few quick thoughts on week 11 of the NFL.  It’s amazing to think that the Chiefs are 9-1 with their offense being as pathetic as it is at times.  The Giants are making a move, and there’s still plenty of time for the Cowboys to choke away the division.  There’s simply no way that the Eagles can go back to having Michael Vick as their starting quarterback, with Nick Foles playing like he has been.  The Chargers playoff hopes went down in flames yesterday with their loss to the Dolphins, which has to be considered an embarrassing loss, given the state of the Dolphins.

Finally, The Walking Dead continued season 4 last night with episode 406 called “Live Bait”.  Spoiler alert for those of you who have yet to see it.  This had to be one of the strangest episodes I’ve ever seen, but interesting nevertheless.  The Governor has returned to the show, and this episode is all about him and his journey since the battle at the prison.  I think after last week we expected The Governor to make some full fledged attack on the prison for revenge.  Instead, we see him wandering aimlessly,  and on the edge of survival.  He is eventually provided shelter by a family that includes three women, Lilly, Lauren, and Meghan.  The Governor taught them how to kill walkers, got oxygen for their dad when he was on his death bed, and he later saved them all from walkers when they hit the road.  At the end of the episode, he runs into former henchman, Martinez, in what can best be described as an awkward ending to the show.

It seemed strange that when we wanted to know the state of Gllenn’s health, and Daryl’s reaction to Carol’s departure, the show focused exclusively on The Governor.  However, this episode was actually terrifying when you put it in perspective.  I was waiting for the moment when The Governor might rape and kill the three women in the family that took him in, but instead, he acted like a decent human being.  The thought that he could transform back and forth from what appeared to be a good person early in season 3, to a terrible person later in the season, and back into a good person early in this season is horrifying.  Just think….if this can happen to The Governor, it can probably happen to any character on the show.  A perfect example of this is the psycho path that Rick appeared to be at the beginning of last season.  It’s just more proof that the greatest danger isn’t the zombies themselves, but it’s the human beings. 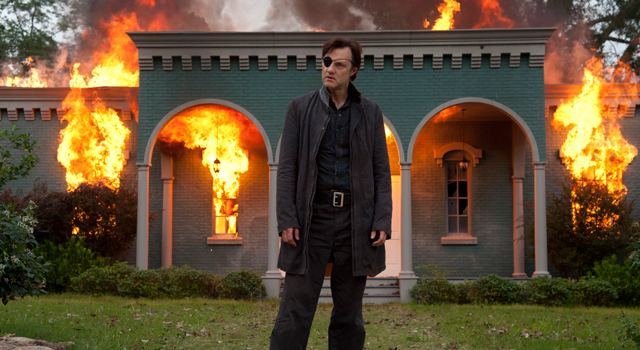