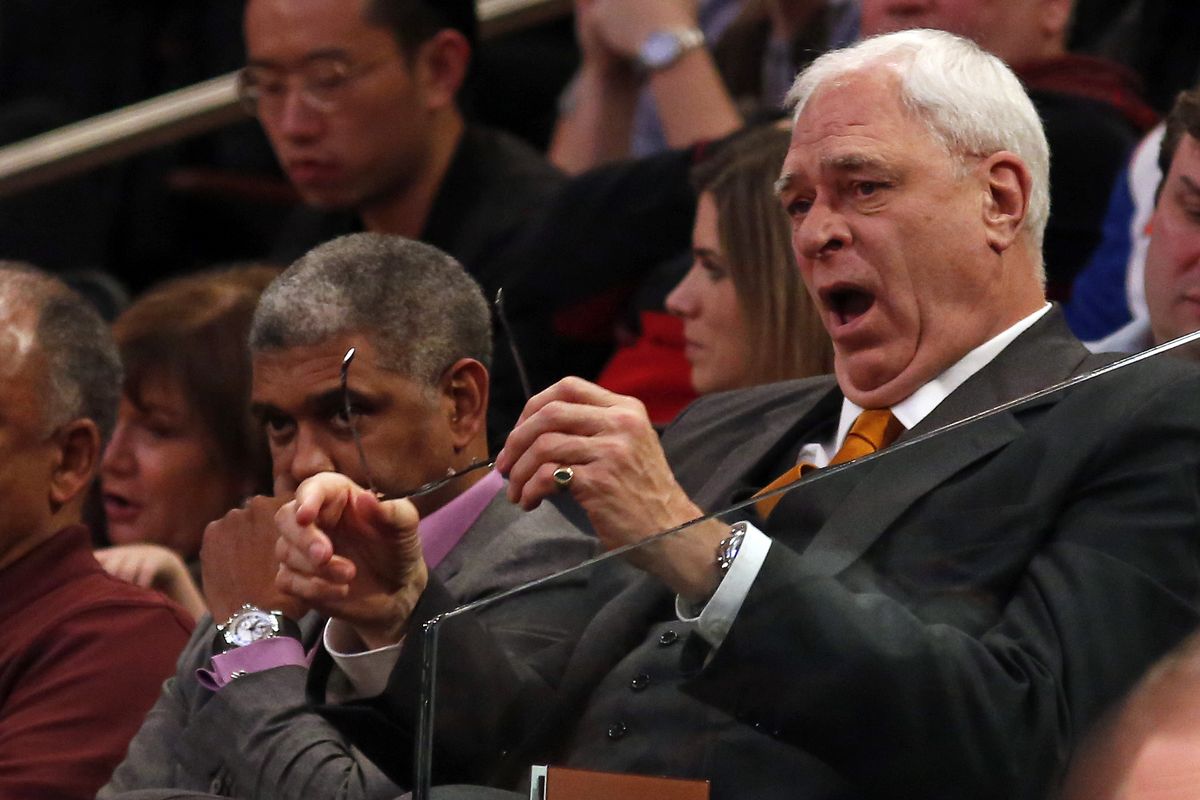 Sometimes the summer is so boring when it comes to sports, people lose their minds and come up with some of the worst ideas in history.  The latest example of this is Stephen A Smith claiming that the Lakers should keep their eyes on Phil Jackson if things go badly this season with Luke Walton.  All this time I thought it was just the executives at ESPN that came up with stupid ideas, but it’s the broadcasters as well.  I guess everyone forgot that the last time Phil coached 7 years ago, he practically mailed it in, not even wanting to coach every game.  He also mailed it in during his latest gig as President of the Knicks.  Not to mention the fact that the game has also passed Phil by, since nobody even wants to run the triangle anymore.  I think the Lakers are just fine without Phil no matter what happens.  As for Luke Walton, he shouldn’t like the fact a story leaked that Tyronn Lue is giving him advice on how to coach Lebron.  Even if it’s true, i think most sensible people wouldn’t take advice on how to even wipe their ass from Tyronn Lue.

Meanwhile, Doc Rivers has got jokes, and he doesn’t even know it.  Most of us were pretty surprised  to see Rivers sign an extension with the Clips when they are faced with a rebuild, which was something he didn’t want to go through in Boston.  Rivers said “we haven’t won crap in LA but we’re trying to.”  He also commented on moving on from the failed Blake-CP-DeAndre era, explaining “it’s called being with the Clippers.”  Sometimes the funniest jokes are really funny because they are true, and that’s the harsh yet hilarious reality of what Doc said.  Still, it’s hard to see why he would want to stick around for all that, but I suppose everyone has their price.

We’ve reached the All-Star break in Major League Baseball, and the Dodgers are actually in 1st place in the NL West due to the fact the division is garbage.  I refuse to be fooled by the idea that the Dodgers are serious about acquiring Manny Muchado.  The day Andrew Friedman trades some quality prospects for an impact talent is probably the day the sun won’t rise.  It will also be the day that Siri stops telling that computer nerd how to build a team due to a software glitch.  The Dodgers window to win with Clayton Kershaw is shrinking fast, so Muchado would help maximize what’s left.  As great as the offense might seem, only Matt Kemp is hitting over .300, so it’s a feast or famine lineup.  Muchado is needed just as much as another bullpen arm or even a starter.  Too bad him being a Dodger probably won’t come to fruition.

Then there’s the Angels who’s season has now been completely obliterated by injuries.  The latest is Garrett Richards, who will finally be forced to undergo Tommy John surgery.  Richards should have had the surgery two seasons ago, because now he’s lost three seasons of his career, and has an even more questionable future in the MLB given his pending free agency.  I think it’s also high time someone launched an investigation into what the hell the front office and training staff are doing, because they’ve lost 7 pitchers in 3 years due to elbow injuries.  That doesn’t even include Shohei Ohtani, who may need the same surgery as well.  Ohtani had his bobble head night on Thursday.  When is UCL elbow injury bobble head night? It will probably take a full season to give out that many different pitching bobble heads, but that feels like the only thing to commemorate each Angels’ season by these days.

Congratulations to France! You may have lost all your wars, but you did manage to win the World Cup yesterday by defeating Croatia.  Apparently soccer fans in France are just as idiotic as soccer fans everywhere else in the world when they celebrate anything, because riots and looting occurred, and several people were killed amidst the chaos.  I thought sports were supposed to unite people rather than divide them? You definitely don’t see that with soccer, which always leads to more of a political or racial discussion than any other sport around the world (although the NFL seems to be doing it’s best to try and catch up).  The latest controversy was surrounding the fact that many of the French soccer plays are of African decent, and creating some sort of racially driven criticism out of that fact.  However, If you’re calling the French players “African”, regardless of your intention, that’s racist.  All of them are French, all but one were born in France. It means for you their skin color is more important than the country they have always known and represent.  It’s because of topics like this that make me glad we only have to watch the World Cup every 4 years.

The NFL is only 8 weeks away! That means we are only 8 weeks from learning Sam Bradford will be out 7-9 weeks with a paper cut.  The Patriots admitting to breaking only 37 NFL rules.  Joe Flacco getting benched and becoming an elite clipboard holder.  Dez Bryant giving up on the NFL and joining the YMCA, and Donald Trump upset with the Eagles for taking a knee to run out the clock.

Finally, The Bachelorette is back on ABC tonight.  After watching last week’s episode, I’m beginning to think that Arie made the right call to break up with Becca last season and go for Lauren.  You think Lauren is boring until you see a whole season of Becca with even more uninteresting guys.  Just when you hope the producers can give you something other than an obscure country artist during a dance date, they end up sticking you with Baja Men.  Chris must have written that ridiculous song.  Did anybody know that Baja Men had a song other than “Who Let The Dogs Out?”  That may be the biggest plot twist of the season.  The last episode was so bad, Trump interrupting the show for his Supreme Court nominee announcement actually made it entertaining.  Obama may have never interrupted The Bachelorette, but he didn’t need to because the show didn’t suck then.  My ultimate prediction for this week: Tia comes back on the show and tells Becca that she slept with Colton and he’s not really a virgin.  I’m not sure which is worse though: two Trump interruptions this season, or two Tia appearances? We’ll see if it gets any more interesting tonight.