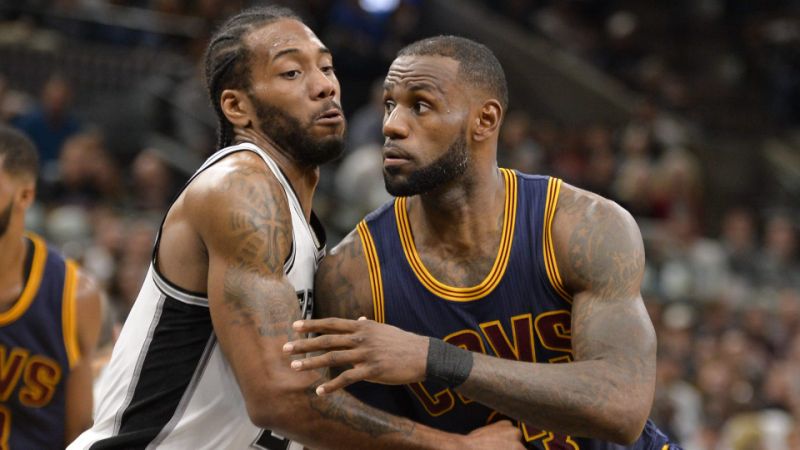 Lebron James is about to hijack your summer.  People are losing their minds over tweets by Jeanie Buss that probably have nothing to do with basketball.  Now Kawhi Leonard apparently wants out, further causing people to think the next super team is forming in Lakerland.  Don’t hold your breath people.  Greg Popovich would probably cut off his arm and trade his star player to a WNBA team before sending him to the Lakers.  Kawhi would have to tell the Spurs he isn’t resigning with anybody else he’s traded to, which isn’t likely because nobody has ever heard Kawhi actually speak.  I’m not even sure he knows how to, further damaging the chances of a trade.

Has anybody noticed that nobody is putting a microphone in front of Lavar Ball anymore? That’s because there’s fewer and fewer people that care what he thinks.  He’s already played his 15 minutes of fame card, and now he just seems like a buffoon with no idea how to run a shoe company.  He should be getting nervous though because Lonzo and his idiotic teammate Kyle Kuzma are dissing each other with stupid rap songs.  That’s just another reason to trade all of them for a veteran star.  These guys have clearly watched the movie “8 Mile” a few too many times, and should be spending more time working on their game.  Magic scolded both, telling them to knock it off.  As if Lonzo and Kuzma’s behavior wasn’t dumb enough, Josh Hart felt the need to troll his boss, Magic, by sending out the tweet below.  These guys need their Twitter accounts suspended immediately!

To baseball where the Dodgers are breathing down the necks of the D’Backs in NL West.  LA has finally turned it around, despite having an entire pitching staff that is injured.  What’s gotten into Joc Pederson and Max Muncy? These guys suddenly look like Joe DiMaggio and Micky Mantle.  They probably would have swept the Giants too if they didn’t rest Matt Kemp and Chris Taylor.  With those two in the lineup, the Dodgers even got the best of Madison Bumgarner on Saturday, a motorcycle riding hillbilly, who will likely end up back on the DL next week after trying to tie his shoes.  I usually have my doubts about the Dodgers, but the division has been so crummy of late, I’m not even sure Andrew Friedman can screw it up.

Meanwhile, the Angels are getting hit with tons of injuries, and it looks like their season is about to collapse.  However, even without the injuries they had issues.  Their starters can’t get to the fifth inning, their bullpen is a liability, and portions of their lineup are wildly inconsistent.  GM Billy Eppler said that the trade market is flooded with relievers but not real ace starting pitchers.  Well if that’s the case Billy Boy, why don’t you go get one of these relievers so your pen doesn’t keep giving away games? The Angels might be slowly rebuilding their farm system, but some of their talent needs to hurry up and develop.  Mike Trout can walk out there door in two more years, an he’s not exactly replaceable.

College Football is right around the corner, and that means the LA Times  is forcing tons of Trojan coverage down your throat.  In their latest piece, they highlight the fact JT Daniels is basically an incoming freshman that might end up starting.  I will never understand parents like his, holding their kid back a grade purely for athletic reasons, or even the idea of graduating high school a year early to play college football, something Daniels helicopter dad made him do as well.  If your kid can play, he will get his opportunity.  Sometimes you still have to let your kids be kids, and that includes letting them finish high school to socially mature as well.  I’m sure you’ll be hearing plenty about Daniels and his dad in the coming months.

The World Cup has been exciting so far!  Lionel Messi also appears to be suffering from “The Curse of Yu Darvish” since he can’t make a penalty kick if his life depended on it.  Egypt waited twenty years to get back in the World Cup, yet decided it was a good idea to rest their best player in a 1-0 loss.  Hopefully Mohamed Salah will be rested enough for the next World Cup in 4 years.  After Saudi Arabia’s first game, their national team has been eliminated.  No seriously, the country has scheduled the players’ execution.  Big upset by Mexico over Germany yesterday.  Not only was that the game of the tournament so far, but Mexico can probably afford to pay for that wall now.  Also, congratulations to the US, Canada, and Mexico for being awarded the 2026 World Cup.  This means that we can still field an awful team and still make the tournament, unlike this year.  It also gives Americans 8 more years to start caring about soccer.

Finally, the Bachelorette is back on ABC tonight with another episode.  I’ve decided the show needs to relax the alcohol policy again.  They need more sloppiness early on for our entertainment, otherwise we are left with guys arguing over Tinder matches.  This is all Corrine’s fault! The show is also feeling more and more fake because girls from previous seasons show up and they are all friends, which would never happen in reality when girls compete for guys.  They would be lighting each other’s houses on fire instead.  I fear that I might not be watching the show anymore for “the right reasons” as Becca says.  Which reminds me, Becca clearly isn’t the smartest Bachelorette.  She asked if Colton went on the show hoping the Bachelorette would be Tia.  Hello? They were dating! Why would he break up with her to go on the show, only to compete over her with 25 other guys? You can’t fool me ABC…I knew that ambulance didn’t show up because there was actually a fight.  After Jordan called himself a golden retriever, dogs all over the world are like….