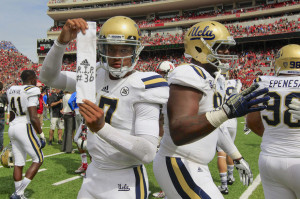 I would have loved to have been a fly on the wall in the UCLA locker room at halftime of their game against Nebraska.  The Bruins were trailing 21-10 in Lincoln, and were being dominated.  In fact, it was 21-3 up until the final minute of the first half, before the Bruins started to wake up.  This might have also been because kickoff was at 9 am Pacific Time, which is usually about the time that most college kids are still recovering from their hangovers.  Then the Bruins scored 28 unanswered points in the 2nd half to defeat the Cornhuskers 41-21, and improve to 2-0 on the season.

In a post game interview that Jim Mora Jr did with AM 570 Fox Sports LA, Mora said that there weren’t really any adjustments to make at halftime, and it was simply a matter of focusing and executing better.  What he really meant, was that he had to tell his players to wake the hell up and start playing the way they know how to.  It’s a good thing they did, because this victory was a  tribute their former teammate Nick Pasquale, who was killed last weekend after being hit by a car in San Clemente, CA.   The Bruins wore number 36 patches on their jerseys to honor Pasquale.

The Bruins were once again led by quarterback Brett Hundley, who had 294 yards passing, to go along with 3 touchdowns.  Hundley did have one interception, but also tacked on another 61 yards rushing.   Jordan James was effective running the ball again for UCLA, rushing for 105 yards and a touchdown.

Mora said “our aim is to be special.  Our aim is not to be average.”  The Bruins definitely looked special on Saturday afternoon, winning on the road against a a team that had won 14 straight non-conference home games, and 10 home games in a row.  All of this coming during a week in which they attended the funeral of their former teammate, Pasquale, and playing with heavy hearts.

The Bruins are off to a nice start, but the road ahead will not be easy.  They should handle New Mexico State at home next week, but will have a much more difficult stretch against Cal, Stanford, and Oregon.  In the meantime, UCLA should feel very good about honoring Pasquale in the best possible way.