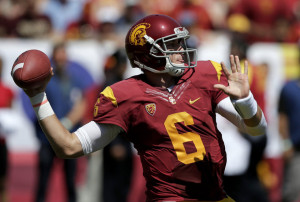 What a difference a starting quarterback decision makes.  The Trojans hammered Boston College on Saturday at the Coliseum by a score of 35-7, to improve to 2-1 on the season, and rebound from an ugly loss last week to Washington State.  It appears for now, USC alums can put away their pitchforks and tiki torches.

After Lane Kiffin finally named Cody Kessler the starting quarterback, he performed much better. Kessler completed 15 of 17 passes for 237 yards, and 2 touchdown passes.  One of his two incomplete passes was on the first SC drive of the game, where he over threw Marquise Lee on a long pass, which actually got a standing ovation from USC fans.  The fans were obviously happy to see Kiffin take the leash off his quarterback, and stop micromanaging his players.  Kessler connected with Tre Madden late in the 1st quarter for a 5 yard touchdown pass.  Then in the 2nd quarter, he hit Lee for an 80 yard touchdown pass, and USC was up 14-0 at halftime.

Southern Cal’s running game took over in the 2nd half, as Madden and Justin Davis got loose for long touchdown runs.  Max Wittek finished things off with a 2 yard touchdown run late in the 4th as well.   For Madden, it was his 3rd straight game rushing for over 100 yards, which made him the 1st Trojan player in 32 years to open the season with such a feat.

The Trojan defense had another strong performance.   The Eagles were held to just 184 yards in total offense.  Although they didn’t force any turnovers, the SC defense was finally supported by an offense that had over 36 minutes of possession time, which kept them off the field and well rested.

Kiffin and the Trojans seem to have stabilized the situation for the time being.  He’s also stabilized the quarterback position by committing to Kessler, which seemed to give the sophomore a renewed sense of confidence.  This may be somewhat surprising to some fans, who were speculating that Kiffin may have had a players mutiny on his hands.  Several players mentioned to the media that they had called a players only meeting, but Kiffin tried to deny that this every took place, which fueled this speculation.

Pat Haden is still watching Kiffin closely.  The Trojans still committed over 100 yards in penalties,  which is typical of a team that lacks coaching discipline.  They’ll get another chance to further stabilize things next week against Utah State at the Coliseum.  In the meantime, hopefully Kiffin won’t create any more drama.