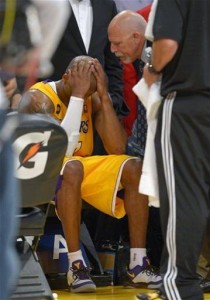 What a nightmare.  A Laker season filled with disaster after disaster took one final plunge on Friday night at Staples Center.  Kobe Bryant tore his achilles tendon in the 4th quarter against Golden State, ending his season, jeopardizing his career, and placing a cloud of uncertainty over the future of the franchise.

At times, Kobe appears to be more of a super-hero than an actual basketball player.  This year, and for many years, he has played through numerous injuries that would sideline most players.  His ferocious competitiveness allowed him to fight through the injuries, and play at an elite level, even after 17 years in the NBA.  He refuses to let the Lakers miss the playoffs.  However, Friday night, his body could no longer carry the weight of the franchise, as he crumbled to the floor.

How did we get here after what we thought would be a promising season back in early October?  Well we can thank Jim Buss for all that.  We can thank him for making things personal by hiring Mike D’Antoni instead of Phil Jackson.  Why else would you choose a coach with 0 championships, instead of a coach with 11 championships who will soon be your brother-in-law?

Phil would have easily had this squad as a top 4 team in the West, maximizing their potential at this point in the season.  More importantly, he would have never allowed Kobe to play over 40 minutes a game at this point in his career.  The last year Phil coached Kobe, he only averaged 33 minutes a game, keeping him energized throughout the season.

Instead, the Lakers were stuck with Mike D’Antoni, who spent months perfecting the art of trying to squeeze the old square peg in the round hole.  The Lakers are big team, yet D’Antoni was trying to get them to play like a small team.  The Lakers needed to play like a slower team to be successful, yet D’Antoni only knew how to coach a fast team.  Over the last two months, the team’s improvement could mostly be attributed to the players taking it upon themselves to change their style of play, while D’Antoni was simply left to be a manager of game minutes.  Of course he couldn’t even do that, and mis-managed Kobe’s minutes to the point of disastrous consequences.

The D’Antoni mistake has not only cost the Lakers this season, but jeopardized what’s left of the Kobe Bryant era.  I’m sure Kobe will work himself to exhaustion to come back next season.  However, it’s no longer about his will.  It’s about what his body will allow.  An achilles tear can take anywhere from 6-12 months to recover from, and even then, we won’t know if Kobe will ever be Kobe again.  Remember, Kobe has said he would never allow himself to be a player that only averages 18-20 points per game, and would walk away from the game before that happened.

Of course this puts the Lakers in a difficult position of deciding what to do with Kobe, who is still owed $30 million next year, the final year of his contract.  What if Kobe is simply unable to play for much of next year?  Are the Lakers really going to keep him for $30 million?  They could use their amnesty provision on him to allow them to spend the money elsewhere, and save $85 million in luxury taxes, but would they really let go of the face of the franchise?  General Manager Mitch Kupchak says “that’s the furthest thing from our minds”, however, that stance could change depending on how the recovery goes.

As sports fan, we all love to watch greatness.  Unfortunately, that greatness doesn’t last forever.  Sometimes it’s there for more than a decade, and sometimes it’s there for only a short period of time.  In the case of Kobe, he’s been great for 17 years, which is easy to take for granted, especially for those of us that live in LA.  However, it takes a moment like Friday night to realize that the greatness you are witnessing can be gone in the blink of an eye, so enjoy the ride while it lasts.