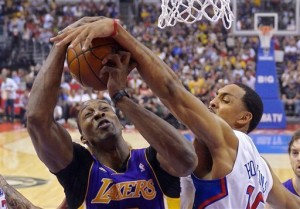 Sorry Laker fans….the playoffs aren’t happening.  If the Jazz go 3-1 over their final 4 games, the Lakers have to go 5-0.  This team hasn’t won on the 2nd night of a back-to-back all season long, and we know it almost never happens in Portland.  Good thing I just sent the Lakers a fat check for playoff tickets I’m not going to get.

As for the Clippers, don’t fool yourself into thinking all is well with this team.  Since their 17 game win streak earlier this season, they have struggled against the elite teams in the Western Conference.  Does anybody really think they can beat Denver, OKC, or San Antonio in a playoff series?  I sure don’t.

We’re only one week into the baseball season, but there’s already some big concerns about our local squads.  The Halos are off to an ugly 2-4 start, which is a disturbing resemblance to what we saw one year ago from them.  The offense has had some ups and downs, and now the teams only reliable starting pitcher is banged up.    Meanwhile, the Dodgers have been getting great pitching, but for $230 million you would hope the team could drive in a few more runs every night.

Great game between the Ducks and Kings last night at the Honda Center.  The Ducks prevailed 4-3 in a shootout, but this was a physical game with a playoff feel to it.  Not only does this appear to be one of the few seasons where both local teams will make the playoffs, but they both might be good enough to matchup with each other in the 2nd or 3rd round of the playoffs.

Finally, I’ve got Louisville tonight over Michigan 77-71.  An interesting drinking game to play would be to drink every time Kevin Ware is showed on TV.  Of course, you would probably be dead about 10 minutes into the game.