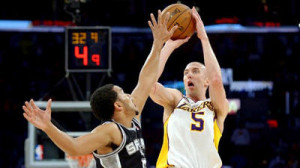 Dwight Howard is angry.  He was in a-hole mode last night in his post game interview with Mike Trudell, providing short and curt responses to all his questions.  It’s obvious that Dwight is annoyed   everyone is counting the Lakers out without Kobe, and acting like he and the rest of his teammates are a bunch of scrubs.  Heck, as long as Steve Blake keeps playing like Reggie Miller, the Lakers should win a championship this year.

The USA Today is reporting that two people close to Howard say they now expect him to re-sign with the Lakers this summer.  Those two people also spoke “on the condition of anonymity” out of respect for the fact Howard has been known to change his mind more frequently than a teenage girl.

Thank god the Astros moved to the AL West or else the Angels might still be looking for their first win at home this season.  Who the hell does Ted Lilly think he is? The dude is taking a beating in the minor leagues, and now he’s demanding to be on the Dodgers major league roster or be released.  Hey Ted, unless you can play 3rd base and hit some home runs, which we know you can’t, just keep your mouth shut and enjoy your $12 million salary.

It’s probably a good thing Tiger Woods didn’t win the Masters this weekend.  A victory would have been looked at with an “asterisk”  in the eyes of most people.  Adam Scott was phenomenal, but the most entertaining part of the weekend was all the cheater jokes that Tiger’s penalty created.  Lindsay Vonn’s ex-husband Thomas tweeted the following:

No problem Masters tournament happy to call in and help. You always have to keep an eye on those cheaters 😉