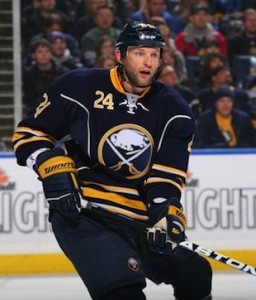 The Kings have made a deal!  TSN’s Darren Dreger is reporting that the Buffalo Sabres have traded defenseman Robyn Regehr to the Kings for two of 2nd round draft picks.  According to Kings GM Dean Lombardi, the deal is pending Regehr passing a physical.

This may not have been the splashy deal that some Kings fans were hoping for, but it adds some very important depth to their depleted defensive core.  Defenseman Matt Greene is still at least a month away from returning from a back injury, and Willie Mitchell remins out indefinitely after off-season knee surgery.

The 32 year old Regehr is a very physical, stay-at-home defenseman, who should also help improve the Kings 15th ranked penalty killing unit, down from 4th best in the league last season.  Regehr is earning a $4 million salary this season, and is scheduled to become an unrestricted free agent on July 1st.

Although the 2nd round draft picks seems like a hefty price to pay, this was a much needed move for the Kings.  Jake Muzzin and Keaton Ellerby’s play have been a very pleasant surprises for the Kings thus far, but it’s unrealistic to expect such a high level of play from these inexperienced players when you get into the playoffs and start seeing quality opponents over a 7 game series.

Interestingly enough, with the acquisition of Regehr, the Kings are one player over the maximum roster size of 23, which means one player will have to be sent to Manchester, or another trade would have to be made.  Given the fact the Kings will not have a 1st round pick this year (Sent to Columbus in the Jeff Carter Trade), Dean Lombardi may even look to move Alec Martinez or Davis Drewiske for a pick or two.

Although some fans were hoping the team would add more fire power up front by acquiring a Jerome Iginla or Jaromir Jagr, the Kings aren’t in desperate need of offense, and the price for those veterans was enormous.  The Kings have scored the 6th most goals in the NHL this season, much improved from last season’s 29th place finish.