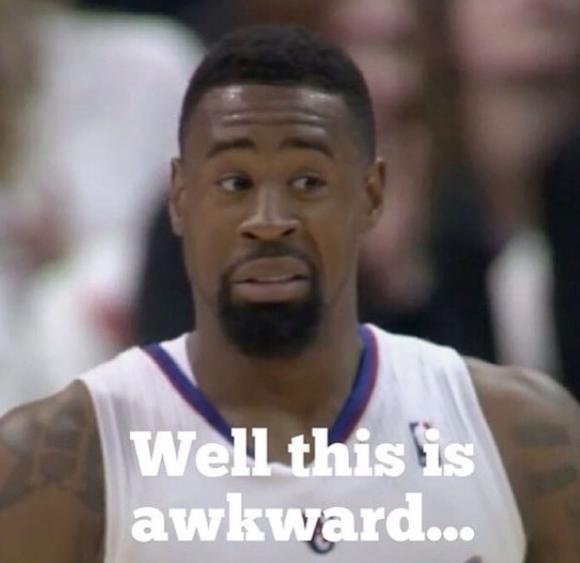 I can’t wait for the ESPN 30 for 30 to come out on the hostage situation at DeAndre Jordan’s house this week in Houston.  DJ proved that he is a 26 year old man with the maturity level of a 3rd grader. There is nothing wrong with him changing his mind, and deciding to renege on his verbal committment to the Mavericks, and re-signing with the Clippers.  However, he didn’t even have the balls to call Mark Cuban and the Mavericks to tell them.  DJ texted Cuban on Tuesday to tell him that he was “on a date” while Cuban arrived at his home.  Turns out that date was dinner with Blake Griffin.  You’ve gotta hand it to Doc Rivers and DJ’s teammates though.  They knew how immature the guy was, and took advantage of it.  Of course they weren’t going to let him talk to Cuban again before signing the contract.  My favorite part of all this though is that the Clippers will go from a 1st round playoff exit to a 2nd round playoff exit after this charade.

The real beauty of this entire DJ story was the dialogue going on between Mark Cuban and ESPN “Insider” Chris Broussard.  Broussard is supposed to be ESPN’s star analyst, with real sources.  This guy is such a fraud, and as I’ve suspected for years, he doesn’t know jack.  In fact, he’s wrong so often that if he predicted the sun was going to come up tomorrow, I’d be concerned that the world was going to end.  Broussard was completely exposed by Cuban.  Imagine what kind of disaster this would really be if we knew he was credible? 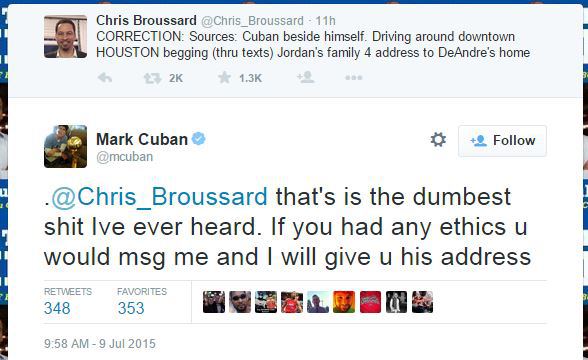 @Chris_Broussard how about this. You post any proof I was calling/texting his friends asking anything I give 100k to charity of yr choice.

Broussard then back peddled with this on his blog:

“Regarding my Wednesday report: I should have attempted to contact Mark Cuban before reporting what my sources were telling me. I always try to carry myself with honesty and integrity both personally and professionally. I recognize that I tweeted hastily, I’m sorry for it, and I will learn from my mistake.”

Meanwhile, how funny is it that Lakers summer league games are generating the most excitement the team has seen in the last two years? I watched D’Angelo Russell for two summer league games, and I get why they picked him 2nd overall.  You can see the talent, but he’s got a lot to learn, and a long way to go before becoming the star the Lakers hope he will be.  It’s hard to be patient when Jahlil Okafor is already a 20-10 player in summer league.  Heck, the Lakers actually have 7 promising young players on their summer league roster, and if even half of them live up to their potential, LA could be on there way back to contention.

In other NBA news, Joel Embiib is likely to miss the entire 2015-2016 season with a foot injury.  In a related story, Sixer fans will also be sitting out the entire season as well.  Embiib has now made $9 million while spending the last two years in the hospital and on Twitter..  JR Smith looks like he’ll be signing a one year deal with Wendy’s, and he should have some stiff competition from Kendrick Perkins to be the starting fry cook.   OKC owner Clay Bennett is a total cheapskate and a moron. He gives the green light to his General Manager to pay Enes Kanter $17 million a year, but refused to pay that kind of money for James Harden.  Thank god we’ve reached the point in the NBA off-season where we are analyzing the banana boat ride that was taken by The King, CP3, The Flash, and Gabrielle Union. 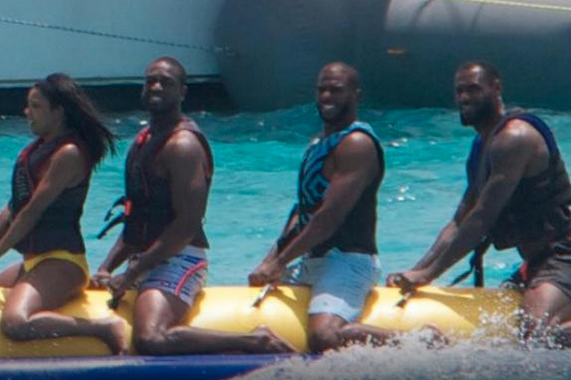 On to baseball, where we’ve reached the All-Star break with the Dodgers holding a 4.5 game lead in the NL West.  We all know however, that if this team doesn’t make a trade, when October baseball rolls around they will disappear faster than Bruce Jenner’s penis.  The front office was bold over the summer, so now they need to be even more bold to make this team a contender.  Call the Reds and trade Yasiel Puig, Alexander Guerrero, and a couple of minor league prospects for Johnny Cueto, Ardolis Chapman, and Todd Frazier.  The Boys in Blue get the pitching help they need in their rotation and the bullpen, while adding some pop at third.  The Reds on the other hand get a potential superstar with Puig, and another rising star in Guerrero to rebuild their club.  Anything short of a major move like that, and we’re likely to see another disappointing fall.  That’s a shame for a team with five all-stars playing in the mid-summer classic on Tuesday.

Meanwhile, after all their 1st half drama, the Angels are in 1st place in the AL West by .5 games.  The Halos have won 11 of their last 14 games while the Astros have lost 6 straight.  The Angels have made up 5 games in the standings in the last 11 days.   I don’t care who they have to remove from their starting rotation when Jered Weaver comes off the DL, but Andrew Heaney should be a regular the rest of the season.  The Josh Hamilton drama seems so far away now, and the departure of Jerry Dipoto is already forgotten.  Bill Stoneman should probably look to add another bat in the outfield or at 3rd base before the month is over, but the Angels look like they have a decent shot in a wide open American League.  By the way, the last time the Dodgers and Angels were both in 1st place at the All-Star break was 2009, when they both lost in the LCS.

As if the DeAndre Jordan incident wasn’t a reminder enough how dumb some professional athletes can be, we also had two NFL players blowing their fingers off with fireworks in the last week.  I don’t know about you guys, but I haven’t really had a desire to go buy fireworks since I was about 12.  I also never really thought there was much of an issue actually letting go of the firework immediately after it was lit.  Apparently none of this applied to the Giants Jason Pierre-Paul and the Bucs C.J. Wilson.  EA Sports has already updated the next version of Madden given JPP’s injury…….. 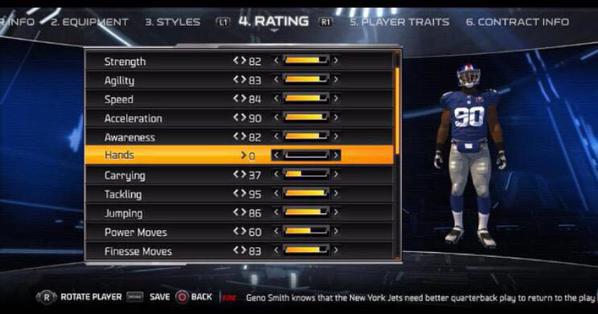 I’m really looking forward to seeing how the NFL revises the punishment it handed out to Tom Brady for “deflate-gate”.  Tom Brady currently is facing a four game suspension.  In 2014, Josh Brent received a 10 game suspension for manslaughter.  In other words, taking the air out of a football is 40% of taking a human life.  Glad we cleared that up.  Here’s a live look at the NFL trying to determine what Brady’s new punishment will be….. 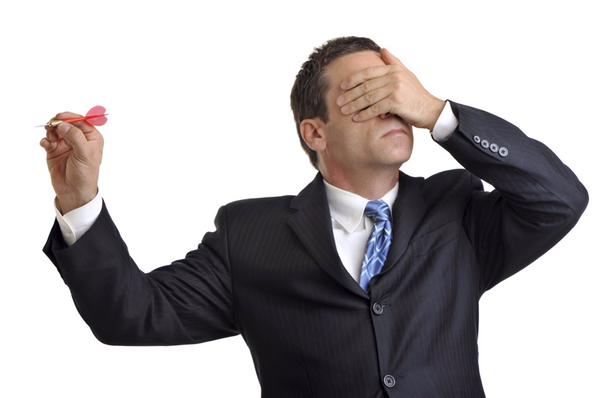 Finally, the NFL is inching its way closer to LA.  However, it’s interesting that last week the Rose Bowl decided not to be a temporary venue for an NFL team that relocates to LA.  That almost guarantees the Coliseum as a temporary home, but it’s doubtful that they would come to any agreement with the Raiders, given the history between both sides.  The only other temporary stadiums that make sense would be Dodger or Angels Stadium, which are the only venues large enough to hold an NFL size crowd.  Look, I’m all for the NFL coming back to LA under the right circumstances.  Circumstances that don’t include paying any taxes on a new stadium, which is how most Southern Californians feel.  However, I don’t see why the league is slamming not one, but two teams down our throats when the market has failed them before.  We don’t need the NFL in LA as bad as the NFL does.  It’s a miscalculated view from a league that may be the most popular sport in the country, but one whose operation looks more foolish by the day.