The Lakers are really taking this tanking thing very seriously, as they have now tanked free agency.  Roy Hibbert and Lou Williams are about all there is to celebrate.  Things haven’t been this bad since…..last summer.  You didn’t really think LaMarcus Aldridge or any other free agent was going to come play with a bunch of 19 year olds did you? There’s absolutely nothing wrong with rebuilding.  However, there is something wrong the LA’s half-ass plan the last couple of years.  The Lakers are too worried about public perception.  They’ve resisted a full commitment to developing young players, so they can convince us they are “staying competitive.”  However, they’ve also failed to open up enough cap space to convince multiple free agents to come to LA at one time the last few off-seasons.  You can blame that on the massive contract they gave Kobe.  That of course has resulted in lame free agent presentations, revolving only around marketing and not basketball.   Their plans are short-sighted.  The Lakers used to be the smartest and richest team in the NBA.  Now they look like the ignorant rich guy, whose in financial trouble, but afraid to fire the butler because people will think he’s poor.  They can start by realizing that their fans don’t need to be sold a bill of goods.  They are more sophisticated than that.  Develop the Clarkson’s, Russell’s, and Randle’s, and collect assets to make the right trades.  Once they do that, the free agents will have something desirable to come to.  The fans are smart enough to realize this.  Why can’t Jim Buss and Mitch Kupchak? When they don’t, that’s where the real backlash comes from.

Then there’s the other basketball crisis in LA, the Clippers.  The Clipps are probably still hoping they can foul DJ in hopes of stoping the clock to extend negotiations with him.  Too bad he’s off to Dallas. I think DeAndre Jordan is crazy for going to a team that is not nearly as talented as the Clippers, but the fact he left tells you a lot about the culture in LA’s locker room.  These guys just didn’t enjoy playing with each other.  CP3 is a demanding player, and there’s nothing wrong with that, but Blake and DJ just weren’t coming along fast enough on an emotional or mental level.  They needed to be accountable.  Not even Doc Rivers and Steve Ballmer can change that.  Where do the Clippers go from here? Probably the same place: an early playoff exit.  Sure they are going to have a lot of cap space next summer, but so will just about every other team in the NBA, many of whom have a much stronger culture.  How soon before Blake and CP3 want out?  The more things change, the more they stay the same with the Clippers.

NBA free agency was unbelievable.  I haven’t seen much money blown since we all bought the Mayweather-Pacquiao fight.  5 years and $80 million for Reggie Jackson?  5 years and $85 million for Draymon Green?  4 years and $60 million for Demarre Caroll? If your team didn’t get anybody, at least be happy they didn’t flush money down the toilet.  Everybody has spent the last week wining and dining LaMarcus Aldridge like he’s one of the Kardashian sisters.  We might as well just get straight to the Spurs-Cavs NBA Finals after he signed with San Antonio.  The Sacramento Kings practices are basically going to be a steel-cage match between Rajon Rondo, George Karl, and DeMarcus Cousins.  I like how they gave Rondo $10 million when nobody was bidding against them.  Kendrick Perkins has free agent visits lined up with Burger King, McDonald’s, and Wendy’s this week.  Poor Damian Lillard.  Now he knows how Will felt at the end of the Fresh Prince…. 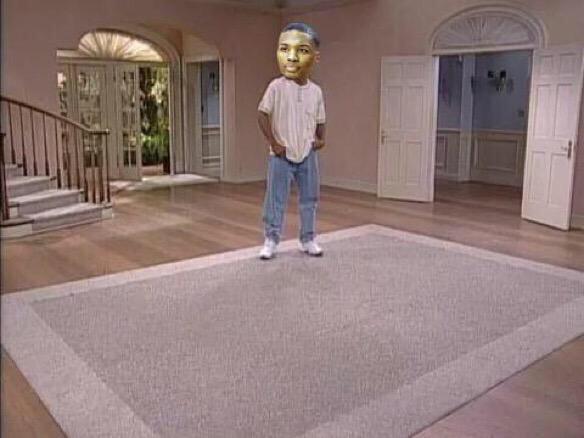 Staples Center’s tenants are just full of drama these days.  Even the LA Kings have a potential PR problem on their hands.  They are having all kinds of salary cap issues, and they badly need another top 4 defenseman.  They couldn’t afford any that were on the free agent market.  Wouldn’t you know it, they have a very affordable top 4 defenseman under contract in Slava Voynov, but Voynov has been suspended since last fall for domestic violence.  Last week he pleaded no contest, and will serve a short jail sentence.  If Voynov can avoid deportation, the league might allow him to return.  Would the Kings take him back after what he did? They aren’t saying it, but of course they would.  What really makes the Kings look bad here is that they just terminated the contract of Mike Richards, after he was allegedly caught with oxycodone with no prescription at the Canadian Border.  If Richards was still a good player, there’s no chance his contract would be terminated.  Neither one of these guys should ever play for the Kings again, but if Voynov does, I sense the public backlash won’t be that great, simply because hockey players aren’t as high profile as NFL players or NBA players.

Meanwhile, the Ducks aren’t having quite as many salary cap issues as their Western Conference rivals, but they missed out on a great opportunity to improve their team by signing former King Justin Williams.  The Kings couldn’t afford him despite the reasonable $3.25 salary he will be receiving from the Capitals.  Williams is known as “Mr. Game 7, for his big game playoff performances”, which is exactly what the Ducks need.  They have blown 3 consecutive game 7’s at home, during the last 3 seasons  Seems like a no brainer to sign Williams.  Anaheim will still be formidable, but not only did they miss out on the chance to improve, but also stick it to the Kings.

The Dodgers have now opened up a 4 game lead in the NL West, but they are having more and more problems everyday.  They are just a .500 team since June 1st, and their offensive run production has declined steadily since the start of the season.  They’ll need to acquire not one, but two starting pitchers before the month is over if they want any chance of succeeding in the playoffs.  If those problems aren’t enough, rumors are starting to fly about how bad of a teammate Yasiel Puig is.  Some of his teammates even think that they would even be better off without him.  Most people say Puig is a top 3 or 4 talent in the game, but I for one do not believe that.  He has plenty of talent, but has shown no ability to harness that talent into consistent greatness.  Imagine the type of return the Dodgers could get if they put him on the trade block? It’s definitely something the Boys in Blue will need to consider if they are serious about making this team a World Series Champion.

What a week it was for the Angels.  The relationship between Mike Scioscia and Jerry Dipoto finally reached a breaking point.  Dipoto has obviously watched the movie Moneyball too many times, and tried to impose his statistical analytics on not just the coaches, but directly on the players.  Scioscia and the players did not take kindly to this, and ultimately, Arte Moreno took Scioscia’s side.  That resulted in Dipoto’s departure, since he could no longer exert the influence he desired.  Scioscia is still a very good manager, but Moreno and the general managers he has hired the last few years have gotten away from the type of players that makes his style of managing successful.  Then again, I’m not sure what general manager would want to take the Halos job knowing the Scioscia is more powerful than him.  Bill Stoneman is a temporary solution at best, because the game has likely passed him by, 8 years after being a GM.  Once again, Arte Moreno has created a mess, and is leaving more and more of a disastrous legacy as an owner.

Congratulations to the USWNT on their World Cup victory yesterday against Japan.  What a perfect weekend for this to happen, being that it was the 4th of July.  Nice to see us getting some revenge for Pearl Harbor.  If the Houston Rockets played soccer, they would be Japan.  By the time you finish reading this Carli Lloyd might have scored again.  Americans now have exactly 24 hours to celebrate  before they are legally required to stop caring about soccer.  It’s amazing what people will wear to get on TV…

I don’t know about you guys, but I’m very excited to see what’s in store for Shark Week on The Discovery Channel this year.  The last few years though, some of the programs have been ridiculous.  Some based entirely on fiction and fearmongering.  Look, I want to be entertained, and I appreciate having the balance between science and entertainment.  However, if I wanted to hear a bunch of mythical stories about monstrous sharks, I’d just flip to the SyFy channel, or just wait for Shaknado to come on again at the end of the month.  So far, I like what I’m seeing, but we’ll see what else Discovery has planned for us this week.