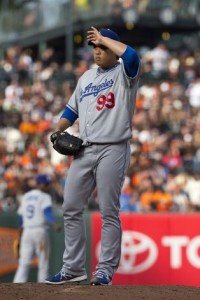 May just started, and it already feels like the 2013 baseball season is toast for the Dodgers and Angels.  Don Mattingly says he actually feels pretty good about his team after getting swept over the weekend against the Giants.  Imagine how bad things would really be if he didn’t feel good about his team!

The Dodgers have the 5th best batting average in the NL, and the 2nd best on base percentage, yet only the Marlins have scored fewer runs than them.  This team can’t hit when it counts, and I’m starting to question the legitimacy of Matt Kemp’s power numbers the last couple of years.

Things are even worse in Anaheim, where the Halos are off to their worst 31 game start in franchise history.  Everyone wants to blame Mike Scioscia for this disaster, but it isn’t really his fault that his starters can’t even give him 6 innings, or that Josh Hamilton is a $125 million scrub.  One could actually make a case that if Scioscia were the manager of the Dodgers, his small ball style would be far more effective in the NL, and if Mattingly were manager of the Angels, his ability to manage big names would make him more successful.

Even though the Kings won game 3 on Saturday night, the team can’t feel that great about their inability to impose their will against the Blues.  Jonathan Quick has been spectacular, but Anze Kopitar and Jeff Carter haven’t scored since the first Iron Man was in theaters.   Apparently, Jake Muzzin needs to cost the Kings a game in this series before Daryl Sutter benches him for good.

The Ducks are catching a big break with the suspension of Red Wings forward Justin Abdelkader.  Gotta love Ducks Coach Bruce Boudreau telling it like it is: “The Wings are a good team.  We’re not playing the Florida Panthers here.”  With Abdelkader out, the Wings may be a lot closer to the Panthers, and the Ducks need to take take control of the series with a win tonight.

We can now add the Miami Dolphins to the list of teams that are using Los Angeles as leverage to get a new NFL stadium in their city.  Dolphins CEO Mike Dee told WFOR-TV in Miami that he has to have a public-private partnership in order for a new stadium to be built.    The NFL isn’t coming back to LA anytime soon, and any hope of it coming back disappeared when Tim Leiweke was fired by AEG, and took a job north of the border.

Finally, people need to stop crucifying the one writer who voted for Carmelo Anthony, instead of Lebron James for the MVP.  Nobody even knows what the criteria is for the NBA MVP award, so at the end of the day, you can make a case that one player is “more valuable” than another.  I’ve always thought the NBA needs a player of the year award, and an MVP award, but that will probably never happen because the league enjoys the MVP debate every year.