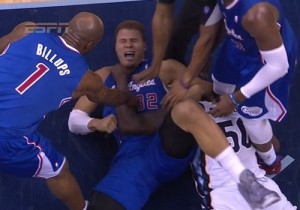 Just another typical night on the LA sports scene.  The Clippers were expected to make a nice playoff run to build upon last season’s success, and then get punked in the first round by Memphis.  Oh there’s much blame to go around in this one!

It starts with Blake Griffin, who looked more like Kathy Griffin in this series.  Griffin averaged a pedestrian 13.2 points and 5.5 rebounds in this series, while only shooting 45%.  His counterpart, Zach Randolph, ate him for lunch by averaging 20.8 points, 8 rebounds, while shooting over 56% from the field.  For good measure, Randolph, also put his exclamation point on the series by putting Griffin in an MMA style choke hold in the 3rd quarter.

Then there’s Vinny Del Negro, who will likely be the first to take the fall for this debacle.  It took 5 games and 3 more quarters for Vinny to realize that his team should play some zone defense to try and slow down Z-Bo and Marc Gasol, who were beating his teams brains in.  For some reason, Del Negro thought it was a good idea to play Jamal Crawford only 12 minutes, which seems strange for a team desperate for some play makers outside of Chris Paul.

I guess it’s also pretty tough to win when you’re starting center is making $10 million a year, and is averaging 3 points and 6 rebounds.  You would think by year 3, Blake and DeAndre would be able to develop some real basketball skill, as opposed to just dunking.

Now there’s the real threat of CP3 leaving the Clippers in July, and bombing them back to expansionism.  Funny how Dwight Howard and Chris Paul have both refused to answer questions about their free agency all year, yet Howard is viewed by most people as a bad guy, and Paul is viewed as a good guy who will probably stay.  Both of these guys are definitely going to evaluate if there is a better situation for them elsewhere, and their identical post game comments after their final game suggest they are leaving the door open for a departure.

I still think Howard and Paul would probably even like to play with each other if the opportunity presents itself.  Depending on where the salary cap number is for next year, the Rockets may be able to come close to offering both of these guys max contracts.  So can the Atlanta Hawks, which are located in Howard’s hometown, and much closer to Paul’s home in North Carolina.  Be afraid Laker and Clipper fans….be very afraid.