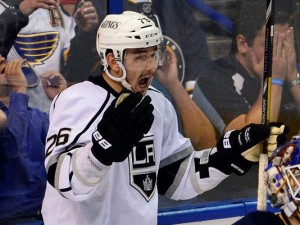 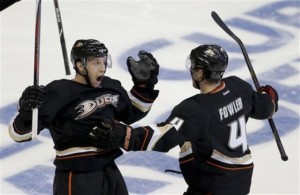 Just one win away from history.  My neighbors think I’m a lunatic from all the yelling and screaming I was doing last night after Slava Voynov scored the game winner.  They have obviously never witnessed playoff hockey, and have no idea what’s going on with the Kings and Ducks.

Jonathan Quick has been amazing.  He’s stopped 146 of 155 shots, and looks like the dude who carried the Kings last spring.  Drew Doughty is unbelievably valuable.  The guy just piles on the minutes, and is the backbone of the Kings defense. And who doesn’t love Justin Williams chasing down every loose puck??

Then there’s the resurrection of Kopitar and Carter.  Once those two scored in game 4, their entire game has returned to elite level.  Kopitar made not one, but two “Gretzky like” passes to set up two of the Kings three goals.  Carter hasn’t had much space to get off his lethal shot in this series, but he’s been finding ways to finish around the net.

Meanwhile, in Anaheim, the Ducks were locked up in another game with the Red Wings that was tighter than a Beyonce jump suit.  Poor Corey Perry.  The guy gets a wide open opportunity in the slot, and Jimmy Howard robs him.  Dude still can’t find the back of the net in the playoffs.  Good thing Bonino and Palmieri are stepping up.

Neither goaltender has been great in this series, but that’s been a much bigger problem for the Red Wings.  Howard was supposed to give the Wings an edge in this series, but he’s played more like Ron Howard.  The playoffs are all about grit and toughness, and the Ducks are getting it from guys like Bonino and Palmieri.

Now each team is just one win away from an epic showdown in the 2nd round of the playoffs, for the first time in the history of both franchises.  The Kings have won nine in a row at home, and will need to make it ten, or else they will have to go back to St. Louis for game 7.  I’ve said that home ice doesn’t matter in the playoffs, because the Kings should be able to win just one game away from home in a playoff series.  That’s only true if they win on Friday.

The Ducks need to go to Detroit, where they will need to avoid the distraction of hearing gun fire and crime in that crummy city.  Even though they have the luxury of playing a game 7 at home, home ice hasn’t meant much for either team in this series.  Take care of business fellas.  You’ve all got a date with destiny next week.