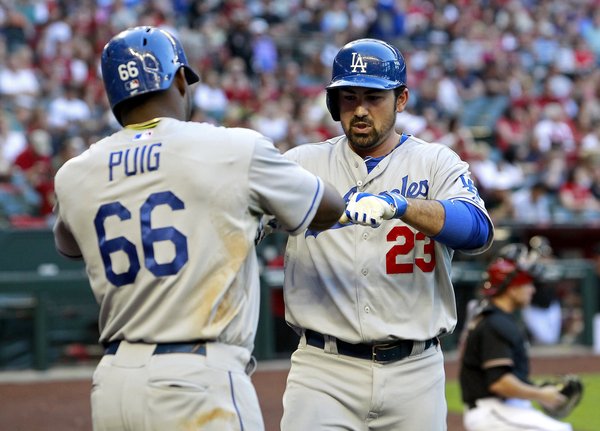 The Dodgers look pretty damn good.  The Boys in Blue swept a 3 game set from the Diamondbacks over the weekend.  Adrian Gonzales is killing it, with homers in 4 straight games.  Dee Gordon looks like the best 2nd baseman in baseball right now.  Dan Haren has been a very solid starting pitcher, and the bullpen has practically been lights out.  Wait until Matt Kemp starts hitting home runs on days of the week other than Sunday.  Oh, and who could forget that LA is off to a 9-4 start with Clayton Kershaw and Brian Wilson on the DL.  This team is very good, and probably going to get a lot better.  Oh, and don’t be fooled by the Giants 8-4 start.  Tim Lincecum, Matt Cain, and Ryan Vogelsong have had their problems in the early going.

Meanwhile, things aren’t so bad for the Angels either.  They took two out of three against the Mets over the weekend, including a 14-2 beat down of New York yesterday.  The Halos are an unspectacular 6-6 so far.  However, the good news is that they are scoring plenty of runs, and nobody else in the American League is setting the world on fire right now.  The bad news is that their ace, Jared Weaver, is declining faster than Tom Cruise’s acting career, and the bullpen is still terrible.  Here’s to the Halos continuing to light up the scoreboard, because I doubt their pitching is going to hold up.

Let’s go to the hardwood, where there is a critical basketball game in the NBA tonight in Utah.  The Lakers will be taking on the Jazz, in what I would definitely call “a must lose” for both teams. That’s right folks.  The Jazz and Lakers are tied for the 4th worst record in the league, and both of these teams badly need to lose this game, to improve their chances at getting the top pick in this summers NBA draft.  Hopefully LA won’t do anything stupid, like try to win tonight’s game.  I’m sure the players will be trying very hard, but good thing Mike D’Antoni will be coaching, or the Lake Show might have a real shot to win tonight.

Classy move by Lakers center Robert Sacre last night.  The first thing he said in his post game interview was, “I have to thank the fans, because our games have still been sold out despite our tough season.”  That’s nice of you to say Robert, but we’re actually a bunch of suckers, who bought our tickets at the beginning of the season, but just haven’t been showing up to most of the games.  You probably didn’t notice because you’re just excited to be getting minutes in the NBA, let alone for the Lakers.

As for the Clippers, they are gearing up for the playoffs, and have the #3 seed locked up in the Western Conference.  The Clipp Show will match up against either Dallas or Golden State in round 1, but it probably won’t matter, as they’ll likely dispatch of them quickly.  The real test will begin in round 2 vs Oklahoma City, which we got a taste of last week.  The Clipps came up on the short end, but LA has to like its chances if Blake Griffin keeps elevating his game.  Speaking of Blake, he will likely get screwed out of a 1st team all NBA selection, since you can only vote for two forwards and 1 center.  That means Lebron James and Kevin Durant will take it, and the center will go to Joakim Noah or Dwight Howard.  How does the NBA let the fans vote for 3 front court players of any kind for the all-star game, but not for its all NBA selections?  Blake is clearly an MVP candidate this year, and should be a first team all NBA player.

To the ice, where the Kings are ready for their playoff matchup with the Sharks this week.  LA won’t have the benefit of home ice against San Jose this year, but something tells me they won’t need it.  The Kings forwards are far bigger, and more physical than the Sharks defense, and I expect LA to impose their will several times.  The Kings will also have a huge advantage in goal, not just because they have the new Jennings Trophy Winner, Jonathan Quick, but because Anti Niemi has been pretty crappy of late.

The Ducks managed to clinch the top seed in the west, with a shootout victory over the Kings on Saturday.  I don’t see Anaheim getting upset in the first round this year, with their matchup against Dallas.  The Ducks are simply too skilled, and too talented, to get upset in the early going.  Great to see Teemu Selanne get a nice farewell tour in his last regular season game yesterday against the Avs.  Selanne’s role has diminished quite a bit this year, however, he deserves to be honored for his brilliant career.  Although Teemu has become the Brett Favre of hockey with his constant retirement talk, part of me wants to see him have some playoff success in his last year, because he just seems like a pretty good dude.

Game of Thrones and Mad Men are on DVR.  Boy do I have a lot of TV to catch up on!