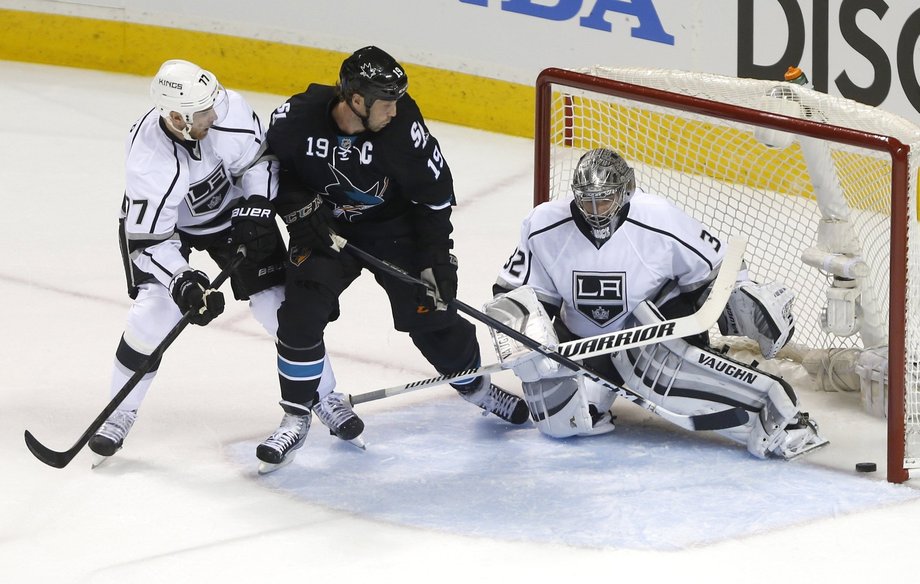 What the hell have I been watching from the LA Kings?  I could swear I stepped into a time machine, and I’m watching the 1980’s Kings teams taking a beating from the Oilers and Flames.  Where the hell is the team that was the #1 defense in the NHL this season?  LA is making the Sharks 3rd and 4th line players look like the 2nd coming of Wayne Gretzky and Mark Messier.  Where are the Kings goal scores? Paging captain Dustin Brown?  Hello Mike Richards?? Care to show up Anze Kopitar?  I realize the Kings were down 2-0 to the Blues in the first round last year, but keep in mind, they narrowly lost those games.  If the Kings are going to come back in this series, they are going to have to start by being more physical.  The Kings have been knocked around more than if they were dating Bobby Brown.  We better see a completely different Kings team on Tuesday night at Staples, or their season will be over on Thursday night.  Yesterday my nieces nephews went searching for eggs.  Meanwhile, the Kings laid one.

Meanwhile, the Ducks haven’t had too many problems with with Stars.  Anaheim jumped out to a big lead in game 1, got a brief scare, but held on for the win.  In game 2, the Stars tried to bring the heat, but the Ducks had too much fire power.  I think it’s safe to say Ryan Getzlaf has had a wild week.  He took a slap shot to the jaw, attended the birth of his third child, then scored a goal to help the Ducks win game 2.  Then there’s Frederik Anderson, who is refusing to give the starting goaltender job back to Jonas Hiller.  Anderson has been pretty solid through the first two games, and as long as the Ducks keep winning, there’s no way Bruce Boudreau can go back to Hiller.  The Stars may be able to steal a game in Dallas, but this series shouldn’t take longer than 5 games.

Those LA Clippers sure know how to disappoint.  Here they were on Saturday afternoon, with a chance to completely steal the Jock Talk LA headlines, as well as the LA sports spotlight.  Instead, they drop game 1 to the Warriors in disappointing fashion, losing home court in their best of 7 first round series.  I realize that Blake Griffin and Chris Paul were in serious foul trouble, but that wasn’t the problem.  The Clippers execution at the end of the game looked a lot like the last two seasons. In other words, give the ball to Chris Paul, and hope for the best.  The Warriors knew this, and immediately double teamed CP3 every possession in the last minute.  Now that Doc Rivers is the Clippers coach, I think most of us thought the offense would be a little less predictable down the stretch.  With game 2 at home and down 1-0, it’s really a must win for the Clipp Show.

Thank god the Lakers season is over.  Can anyone really blame Kobe Bryant for leaving a day early to go on vacation with his family?  Maybe he should apologize to his all his bum teammates, most of whom won’t even be on the team next season?  Not really.  Jim Buss has proclaimed that if the Lakers aren’t contending for championships within 3-4 years, he will step aside from basketball operations.  I’ve got news for you Jim, if you don’t fire Mike D’Antoni now, make a fantastic lottery pick this summer, and find a way to acquire a superstar or two, they’ll need to find your replacement.

My goodness…..what has happened to the Indiana Pacers?  Five road teams ended up winning game 1 of the NBA Playoffs.  This is starting to feel like the NHL Playoffs.  Then again, maybe the higher seeds are a little overrated this year.

On to baseball, where the Dodgers keep rolling, and abusing the Diamondbacks.  The Dodgers took another two out of three from Arizona over the weekend.  Yesterday was the Yasiel Puig show, when the Cuban sensation made a spectacular play by throwing out a runner at 2nd base, and then hit a 3-run home run.  None of the Dodgers outfielders have really gotten it going yet. When that happens, LA is going to run away with the division, because they have a war chest of pitching, that has been lights out.  The Dodgers even got 5 shutout innings from Josh Beckett yesterday.  There are 5 guys on the Dodgers who are capable of winning and MVP.  As long as everyone is healthy, there’s no reason this team shouldn’t be contending for a World Series crown.

As for the Angels, they had a tough weekend, losing two of three in Detroit.  The starting pitching hasn’t been all that bad, but the bullpen is pretty horrendous.  It’s going to be all about the offense for this team, and that is something to feel good about.  They lead the majors in slugging percentage, and are 2nd in runs scored.  Unfortunately, 12 of the next 15 games will be against the Nationals, Yankees, and Rangers. The fans are giving Mike Scioscia a lot of heat these days, but I’m still not really sure why.  He’s doing the best he can with the cards he’s been dealt by Dipoto and Moreno.  It’s gotta be awkward for Scioscia to be managing a team that doesn’t have a pen, not a lot of team speed, and isn’t great defensively.  It just isn’t part of his identity.

There is definitely some important to TV shows to recap this week, starting with Game of Thrones. In the aftermath of the death of King Joffrey, we see Sansa escape courtesy of Lord Peter Baelish, and we find out that he was involved in the plot to kill the King.  Margery wonders if she’s still the queen, and Lady Olenna convinces her that she still is, while showing some sympathy for Joffrey’s family.  Joffrey’s little brother, King Tommen is lectured by Tywin about what it’s going to take for him to be the next great King.  Meanwhile, as Cersei weeps over the loss of Joffrey, Jamie tries to console her, and ends up returning to his incestual ways by screwing Cersei right by the coffin.  Aarya and The Hound find shelter, then The Hound mugs the farmer the took them in.  The Wildlings wage war against Northern peasantry in hopes of drawing The Night’s Watch away from the wall.  Then Danaery’s gives the speech of a lifetime in an attempt to win over another community.

This episode was a bit slower after the death of Joffrey.  Clearly, Lord Baelish was in on the plot to kill Joffrey, but it couldn’t have been just him.  I still think Lady Olenna helped him do it.  There’s plenty of incentive for Baelish to want Sansa by his side, and for Lady Olenna to want a new King by Margery’s side.  King Tommen has the feel of a better King than Joffrey, but he’s a Lannister, which still makes him a villain in most people’s minds.  We also see a return of the unlikeable, incestual version of Jamie Lannister.  Danaery’s still feels like one of the last few “good guys” in the show, but she has the same leadership qualities as Rob Stark, and we all know what his fate was.

Mad Men also returned for the 2nd episode of the final season last night.  To recap this Valentines Day themed episode, Peggy is greeted by flowers at the office, and she thinks they are from Ted.  Later on she discovers the flowers weren’t for her, and after some other secretaries claimed the flowers weren’t for them, eventually Shirley admits they were from her fiance, which angers Peggy.  Sally loses her handbag, and eventually looks for her dad at the office.  She awkwardly learns he isn’t at the office, and wonders what happened.  Eventually she meets him at home, and then confronts Don about his lies about his job.  The two eventually go to dinner and have a good heart to heart.  Don drops Sally back at school, and they are both pleased with how the evening went.  Other office drama during the episode included Lou being upset that Sally came by to inquire about Don while Dawn was out.  Peggy asks Joan that her secretary be removed, and Pete starts to feel useless.  Don is also attracting interest from other firms.

In many ways this was really a feel good episode.  It started out looking like like a bigger fallout between Sally and Don was coming.  However, by the end of the episode, not only is their relationship strengthened, but you wonder if its a moment that actually help Don get his life back on track.  Meanwhile, Peggy simply can’t work with any of these secretaries, let alone Shirley, after her complaint to Joanne.  I’m beginning to find the Peggy story less and less intriguing as the show goes on.  It’s been a slow first two episodes, but I’m curious to see how Don’s character evolves as the show winds down.