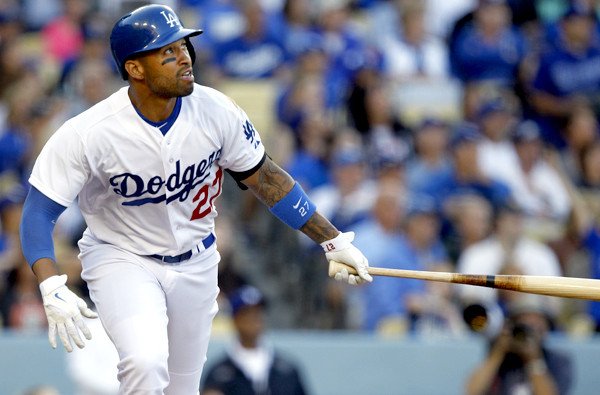 The start of the 2014 baseball season has a similar feel to it as last season for the Dodgers.  Despite last night’s win, the Boys in Blue came out of this weekend black and blue from their battle with their hated rivals, the San Francisco Giants.  LA lost two out of three.  Pitching is supposed to be the Dodgers strength, but Hyun-Jin Ryu was sliced and diced like sashimi on Friday, and Paul Maholm got knocked around like a battered housewife on Saturday.  Some early injuries combined with that trip to Australia, could make this a very slow slow start for LA.  It’s no wonder the Dodger players were bitching about the trip to Australia.  The trip gave Clayton Kershaw a back injury, which he’ll need a month to recover from.  It gave reliever Brian Wilson and elbow injury, and it clearly fatigued Ryu.  On top of that, Josh Beckett can’t even walk through the clubhouse without slamming his thumb in a door, adding to the injury woes.

Then there’s Yasiel Puig.  As great as this dude is, he’s got more drama surrounding him than a high school teenage girl.  He shows up late on opening day and gets benched, then suffers an injury the next day, and earlier in the week was calling team meetings to ask his teammates how he can be better.  I’m suddenly getting “Puig fatigue” from this circus.  This whole week is just more proof that the Dodgers need not 4, but 5 solid outfielders on their roster.  You never know what the Puig circus brings, nobody really knows if Matt Kemp can stay health and beast like he used to, Andre Ethier can’t hit lefties, and Carl Crawford is still pretty fragile.  In any case, there’s plenty of at bats for all of these guys, but hopefully they start making the most of them, or the Dodgers will be playing catch up in the division against the Giants.

As for the Angels, I’m thinking they should have been the team to sign a new cable deal, so that 70% of their fans couldn’t watch their horrendous games.  I realize “it’s early”, but I also said this after seeing the same crap early on the last two seasons.  After 6 games, the Halos are already in last place in the AL West, and their team ERA is in the bottom third in major league baseball.  It’s one thing for the back of the rotation and the bullpen to stink, but if Jared Weaver and CJ Wilson are going to get lit up, then the Halos season will be over by the end of the month.  The pitching isn’t the only problem either.  Albert Pujols and David Freese have yet to produce at the plate, and to really rub salt in the wound, Mark Trumbo leads the majors in home runs and RBI’s in Arizona.  Sorry Angel fans, we’ve seen this movie before, and it doesn’t have a happy ending.

On to the NBA, where it baffles me why ESPN and TNT continue to put the Lakers on national television, when the team is nothing more than a pile of bird crap.  The Lake Show got dominated once again by the Clippers yesterday at Staples Center, 120-97  The Clippers need to finish the season strong, to be sure they maintain at least the #3 seed in the West.  If the Clippers were to fall to the 4th seed, they would likely face San Antonio in the second round of the playoffs, and probably get taken to school.   The Clipps stand a much better chance against Oklahoma City in round 2, and might even get lucky, and have Houston knock out the Spurs before the Western Conference Finals.  Then again, Tim Duncan will probably make Dwight Howard cry before that series is over, so it’s probably wishful thinking.  Good thing the Clippers have another week to get Jamal Crawford and Danny Granger healthy.

As for the Lakers, they have just over a week left in their disastrous season.  With only 5 games left, LA will be very fortunate to finish with the 5th worst record in all of basketball.  It’s a virtual certainty that the Lakers won’t finish with a worse record than Boston, Orlando, Philadelphia, or Milwaukee.  However, their battle with Utah in a week will be critical for lottery position.  This means the Lakers will have to get lucky in order to get one of the top 3 picks in the draft.  Off the floor, most season ticket holders should be outraged at the fact that the Lakers are asking for renewal payments in mid May this year.  This is even before the lottery, before free agency, and possibly in the midst of a coaching search.  Usually, these payments happen in July, so the fans have even more to complain about, in addition to Jimmy Buss.

Yesterday, JR Smith broke the NBA record for 3 pointers attempted in a game, with 22.  Honestly, I’m shocked that it took him this long to attain the record.

On to the ice, where the Kings have clinched a playoff spot, but have lost their last two games.  With 5 games left, this is the point of the season, where I’m going to be unhappy with the results whatever happens.  If the Kings are winning these meaningless games, I’m going to be wonder if they are peaking too soon.  If they lose these games, I’m going to be pissed because they aren’t building enough momentum for the playoffs.  These last 5 games also make me extremely nervous that some of LA’s key players could go down with some injuries, which nearly happened when Drew Doughty suffered a shoulder injury the other night.  Fortunately, the injury wasn’t serious.  What was amazing Saturday, was the fact Slava Voynov scored.  The last time that happened, Malaysian plans were still landing at their destinations.  This Matt Greene injury looked painful…

Meanwhile, the Ducks have two games in hand on the San Jose Sharks, so they will probably hold them off to finish 1st in the Pacific Division.  However, this team has looked very unimpressive the last 3 games.  They were down 4-0 against Winnipeg, and needed a miraculous rally to win.  They needed to rally from 2 goals down to beat the Oilers, and they got destroyed by Nashville, then lost to the Oilers last night.  The Ducks aren’t going to be able to come from behind against playoff teams.  We’ve seen this time and time again from Bruce Boudreau’s teams: amazing regular seasons, followed by late season collapses and playoff failures.  I’m not saying this is going to be another year of the same story, but I’m saying it might be another year of the same story.

Kentucky vs UConn?  Yes, I’m sure we all had that in our brackets.  I’m taking the Wild Cats tonight.  Shabazz Napier has been phenomenal, but the Kentucky freshman have been gelling at the right time, and I trust the experience of John Calipari over Kevin Ollie.

And finally, the season four premier of Game of Thrones took place last night on HBO.  Spoiler alert for those of you who have not seen it yet.  To recap quickly, Tywin Lannister begins the episode by melting Valerian steel onto a sword.  We learn that this sword belonged to Robb Stark, who was murdered in the last season.  Jamie Lannister’s ability to remain in the Kings Guard is questioned by Tywin and King Joffrey.  Cersei is angry with Jamie for leaving her for so long.  Sansa is still miserable, and a maid discovers there is drama between Tyrion and Shae, and the maid reports this back to Cersei.  In the north, the wildlings are planning to march on Castle Black, and we are introduced to the Thenns, who are cannibals.  Jon Snow faced some type of discipline for his actions, but is spared his life.  Daario tries to get back into Khaleesi’s good graces, and Arya gets revenge by killing the man who killed her friend, with the help of The Hound.

It’s great to have the show back.  This episode really made the viewer have to re-evaluate where all the threats to the Lannister’s empire were coming from.  Interestingly enough, there aren’t too many people in the Lannister family that can see these threats, other than maybe Tyrion.  The threats seem so far away at this point, that its very difficult to see how this is going to play out.  Khaleesi seems a world away from everyone, and Stanis Baratheon doesn’t even have an army anymore.  I often struggle to follow what is going on in the North, but that also seems like a world away, so it’s hard to even imagine a war taking place with the Lannisters and the far North.  It’s a great start to the season, and looking forward to the next episode.