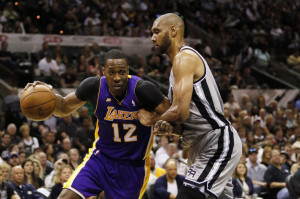 So Mike D’Antoni was bothered by Kobe’s in game tweets.  Give me a break!  We all know that Kobe isn’t saying anything that we all aren’t already thinking.  Besides, Kobe’s tweeting makes the game that much more entertaining for all of us watching at home.    What’s with Mike D’Antoni’s man crush on Steve Nash anyway?  Nash gets back in the lineup after missing about a month, and D’Antoni thinks he’s back in Phoenix running play after play for Nash, who was rustier than an iron nail in the ocean.

What will it take for the Clippers to get some attention in this town?  They dominate the Grizzlies in game 1 on their home floor, yet the Lakers are still dominating the headlines.  It’s going to take a deep playoff run for these guys to make a serious dent in the LA sports landscape, and maybe even to save Vinny Del Negro’s job.

The Dodgers are sinking like the titanic, and now they are out of starting pitching.  Chad Billingsley will likely need season ending surgery, which only makes Zach Greinke look like that much more of an idiot for intentionally hitting Carlos Quentin.   Meanwhile, the Angels finally remembered how to hit, but when you’re $240 million first baseman claims “I’m dying” from a foot injury, you have to be pretty concerned.

The Ducks have just about wrapped up the Pacific Division title, but I still have my doubts about this team style being effective in the playoffs.  The Stanley Cup playoffs are about grittiness and toughness, which the Ducks don’t have.  As for the Kings, last night’s win makes me think they have another gear they can take their level of play to.