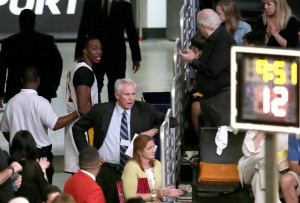 Thank god it’s over.  The Lakers season mercifully came to an end on Sunday evening at Staples Center.  This has been the most disappointing season in franchise history.  Great effort on behalf of Dwight Howard as well.  2 shot attempts in 3 quarters of play while playing with bunch of D-League players?  No wonder he got himself ejected from the game.  Dwight might have some maturing to do, but it’s not going to happen with D’Antoni coaching him.  Now some fans can pretend to care about the Clippers for the next couple of weeks.

Everyone is applauding Jason Collins for coming out and admitting he’s gay, but why should we care?  Your sexual orientation is nobody’s business but your own, and it’s not something you need to wear on your sleeve.  The fact that everybody is making such a big deal out of this tells me that the sports world isn’t comfortable with it yet, no matter how much people try to say things have changed.

Why do people who watch the NBA have the memory of a 3 year old?  Steph Curry and Klay Thompson have been playing great, but after 4 great games people wanted to anoint them the greatest shooting backcourt in team history.  Most of these people have probably never heard of John Stockton and Jeff Hornacek, Mark Price and Craig Ehlo, or Jerry West and Gail Goodrich.

Carl Crawford has been on fire.  I thought this guy’s arm would have fallen off my now, but he’s easily been the Dodgers best player this year.  Matt Kemp and Andre Ethier need to start earning their paychecks for the boys in blue to go anywhere.  Speaking of not earning your paycheck, the Angels trio of Mike Trout, Albert Pujols, and Josh Hamilton have combined to hit .167 over the last 6 games with 16 strikeouts.  The Halos have equaled last year’s horrendous start of 9-15, and now that the Lakers are toast, we can focus our attention on how badly our two expensive So Cal baseball squads stink.

The Kings ended up getting a great 1st round matchup against the Blues.  Although they won’t have home ice advantage, they’ve beaten the Blues like they stole something over the last 8 games.  I’ve got the Kings in 5.  Meanwhile, the Ducks may have a little tougher time with the upstart Red Wings, but they should have enough fire power to win the series in 6 games.

I sure hope Matt Barkely had fun in his senior year and slept with as many sorority girls as possible, because he cost himself about $30 million by not coming out for the draft last year.  The Eagles seem like an awkward fit for Barkely with Chip Kelly’s system, which will only make things tougher for him.  Barkely’s free fall to the 4th round reflects poorly on USC quarterbacks, and it will definitely have a negative impact on Lane Kiffin’s ability to recruit quality talent at that position.