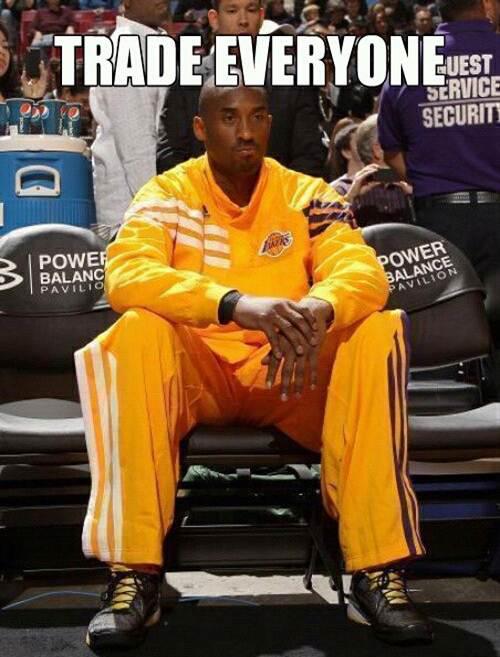 Great job Jimmy Buss!  The ink isn’t even dry on Kobe’s two year contract extension, and he’s hurt again.  Maybe Jimmy boy will give Kobe another two year extension when he returns from his latest injury.  Look, I love Kobe, but this is exactly why you don’t give a 35 year old, coming off a torn achilles, a $48 million extension.  Kobe says this injury may actually give him a chance to get even stronger, but the only thing that is really getting stronger are the Lakers lottery chances.  There’s no doubt Kobe’s work ethic is as strong as ever, but there’s only so much his body can take after 18 years in the league.  At least now with Kobe out, the Lakers can tank without actually trying to tank.  Even Magic Johnson told CBS’s Jim Hill earlier this week that Kobe should sit out the season so the Lakers can get a high lottery pick, like the Spurs did in 1998, when they drafted Tim Duncan.

Now the Lakers have the excuse they need to trade Pau Gasol.  A Gasol trade may not bring back equal value in talent, but shedding his $19 million salary will get the Lakers under the dreaded luxury tax, and possibly even allow them to get back a future first round pick.  Do you realize that Steve Nash cost the Lakers 3 1st round picks?  Two in the trade with Phoenix, and one they gave up in the Ramon Sessions trade.  You do remember Steve Nash right?  You know….that point guard that’s older than a fossilized dinosaur, who will be making $9 million this year and next.  Getting rid of these guys is the first step toward rebuilding the Lakers.  But even if they do, does anybody believe LA will get back to winning titles with Jim Buss in charge?  In 1999, Charles Dolan put his moronic son, James Dolan in charge of running the New York Knicks, and since then we’ve all had some good laughs.  It’s scary to think that history might be repeating itself in LA.

Speaking of the Knicks, interesting rumors are floating around Clipper Nation.  Jared Zwerling of Bleacher Reports recently wrote an article discussing a possible Blake Griffin for Carmelo Anthony blockbuster trade between the Knicks and Clippers.  Last week, I suggested that the Clippers may have peaked with this group, and might need to look at a big trade to become the elite team they hope to be.  This isn’t exactly what I had in mind though.  It’s no secret that CP3 and ‘Melo would love to play with each other, but this would make the Clipps much older, and far worse defensively. The Knicks would have a star to build around for the future, and the dumbest owner in sports would have bamboozled the cheapest owner.  It’s sounds crazy, but it’s crazy enough for Sterling to do it.

The Clippers pulled out a wild win last night at Staples against Minnesota.  I still can’t figure out what’s up with the T-Wolves this year.  They got off to this great start, then they slipped to 11th in the West, and Ricky Rubio is afraid to shoot because he’s struggling.  Still a great game last night at Staples, and an epic battle between Kevin Love and Blake Griffin, as neither guy seemed to be able to guard the other.  The Clipps won the game, but when it was over,  it still felt like Love was the more polished player, while Griffin was only a more entertaining player.

On to college football, where the Trojans wrapped up their season on a positive note, with a win against Fresno State in the Las Vegas Bowl.  SC wasn’t exactly facing a powerhouse opponent, but they could have easily mailed it in, like they did in the Sun Bowl last season.  That does say a lot about the character of the graduating seniors and upperclassmen headed to the NFL, especially when they had to work with their third coach of the season, Clay Helton.  I’m sure that wasn’t awkward or anything.  Speaking of coaching, just a couple of weeks into the Steve Sarkisian era, and Trojan fans are already shaking their heads about recruiting violations that may have occurred under Sark’s watch at UW.  Now Sark has to beg Ed Orgeron to come back to SC to be a part of his staff, however, Orgeron might tell him to suck it, since he took the job he wanted.  That “gut feeling” Pat Haden had when he hired Sark, is probably more like a throbbing pain right now.

On to some college basketball, where the Bruins are who we thought they were.  UCLA put up a good fight against #8 Duke on Thursday night, but ended up getting pounded in the end.  Last night they continued to beat up on the little guys, taking down Weber State  in another blowout.  Who do the Bruins play next?  San Diego Christian Academy? Steve Alford is starting to feel like the Mike D’Antoni of Westwood.  Up tempo offense, no defense, great regular season, no post season success.  The Bruins could get exposed badly next month when conference play rolls around.

Let’s go to the ice, where Kings rookie goaltender Martin Jones is tearing it up.  Jones has won his first 8 starts in spectacular fashion, tying an NHL record.  I’m not one of those people crazy enough to think the Kings need to trade Jonathan Quick after 8 good games from Jones, but he has given the Kings some tough decisions to make when Quick gets healthy.  They’ll have to decide whether to send Jones back to the minors, or keep him as the backup and send Ben Scrivens to the minors.  Scrivens has to be wondering what it takes for him to play again, since he was leading the NHL in save % before Jones started playing.  Interestingly enough, Martin Jones now has a whole bunch of teammates following him on Twitter.  Ben Scrivens isn’t one.  By the way, Dwight King made maybe the creepiest face I’ve ever seen after he scored on Thursday night….. 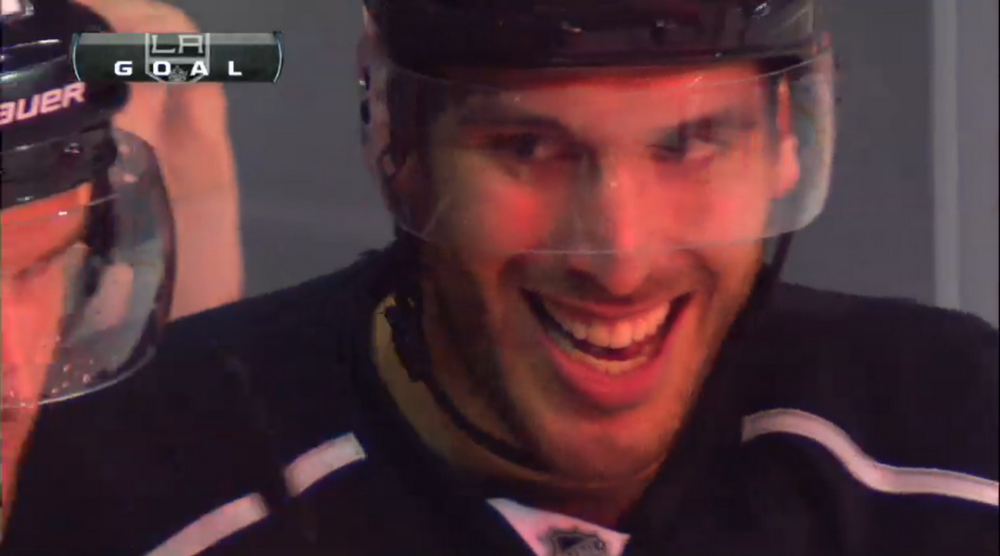 Speaking of rookie goaltenders, the Ducks have a rookie goalie of their own who hasn’t been too bad either.  Frederik Anderson has done a commendable job filling in for injured backup Victor Fasth, and he’s won 9 of his first 10 starts.  He is just the third goaltender in NHL history to do so.  Anaheim has won 8 straight games, and coach Bruce Boudreau will make his return to Washington tonight, when the Ducks take on the Caps.

Week 16 of the NFL was a wild one.  How did the Lions manage to blow the division when they only had to beat the Giants at home?  Nice showing by the Bears defense last night.  I think the Eagles just scored again.  The Chargers are still alive for the playoffs….but barely.  The Seahawks don’t look so invincible anymore after yesterday’s loss at home, but they still may not have to leave Seattle until the Super Bowl if they clinch home field next week.  I can’t wait to see how the Cowboys will blow the division title for the third year in a row next week on Sunday night football.  I’m still not really sure how the Ravens managed to give up 41 points at home to the banged up Patriots, but I loved how Tom Brady was left hanging on this high five…..

I never want to hear the phrase, “they control their own destiny.”  Hello?  It’s “destiny”.  You can’t control destiny, because it’s your destiny!  My head hurts after looking at all the AFC playoff scenarios for next week.  Take two aspirin after reading….. 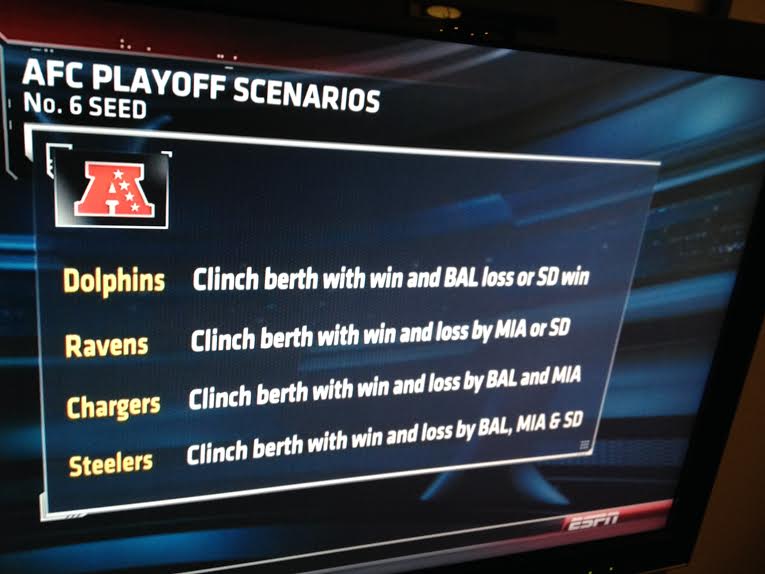