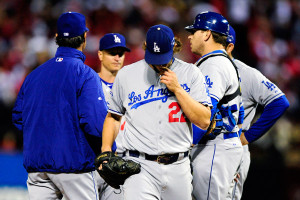 It couldn’t have come at a worse time.  It was the biggest game of the season, and the biggest game of Clayton Kershaw’s career, and he had one of the worst outings of his career.   Kershaw was rocked for 7 runs and 10 hits in 4 innings of work, during game 6 of the NCLS, and the Dodgers were obliterated by the Cardinals 9-0.  The way the Dodgers lost was incredibly disheartening.  Kershaw looked human, and Yasiel Puig came crashing back to earth, as he made a fielding and throwing error, while going hitless in three at bats.  The Dodgers lineup felt like it was being held together by chicken wire, but they finally collapsed.  Hanley Ramirez’ broken ribs made him ineffective, Andre Ethier’s ankle caused him all kinds of problems, and with Puig struggling, nobody was left to protect Adrian Gonzales.  Michael Wacha owns the Dodgers, and is going to be a stud.  And with that, the Dodgers season is over.

On the bright side, I won’t have to spend $1,000 on a World Series ticket, since the Dodgers won’t be playing in it.  Should we feel good about the Dodgers season because the future is bright and the franchise is revived? Or should we feel like they blew an opportunity to win a championship?  I say the latter.  Just ask the Washington Nationals or the Texas Rangers, who had great opportunities the last few years to win the World Series, and now they are struggling to get back there.   This series was blown in game 1, when Mattingly mismanaged the lineup, and put Michael Young in for Adrian Gonzales.  In any case, the Dodgers do have the resources to put themselves back in the same position next year, but hopefully a healthier team, a more experienced Puig, and some smarter managerial decisions by Mattingly will put them over the top.  They’ve already improved their team this morning by signing Cuban 2nd baseman Alex Guerrero to a 4 year $32 million deal.

On to college football, where the Bruins just couldn’t hang with the big boys this weekend, losing to Stanford 24-10.  UCLA quarterback Brett Hundley was under pressure all day, and the Bruins just couldn’t get much offense going.  Meanwhile, Stanford racked up 419 yards of total offense, while UCLA had just 266.  The bad news, the Bruins still have to deal with Oregon next week, and they’ve been unable to solve the Cardinal, who have now beaten them 6 straight times.  The good news however, is that UCLA only dropped to #12 in the BCS standings, and as long as they take care of the games their supposed to win, they should get another crack at Stanford or Oregon in the Pac-12 championship game.  In other words, the Bruins have figured out a way to consistently beat the crappy teams, but still can’t get to the next level…..yet.

As for the Trojans, they were outlasted by my Fighting Irish of Notre Dame by a score of 14-10, this weekend in South Bend.  This game was sloppier than a Friday night at the Linebacker Lounge, as both teams couldn’t put the ball in the end zone to save their lives in the second half.  When I showed up in South Bend on Saturday night, I thought I would have the displeasure of seeing just two crappy quarterbacks, and instead I managed to see three! After Notre Dame’s Tommy Rees left the game with an injury, Notre Dame was left with Andrew Hendrix, who couldn’t even complete a pass.  At least the Irish had the excuse of having one horrendous quarterback being replaced by an even more horrendous quarterback.  What was USC’s excuse?  I suppose it’s the reality setting in that they don’t actually have a real football coach yet.  It was cute to see the Trojan fans pretending like their season was revived after the win against Arizona, but the season was thrown out when Kiffin was fired.  On the other hand, it may not be long until SC is good again, if they hire the right coach.

I also had the privilege of attending the Colts and Broncos showdown last night in Indianapolis.  The Colts fans are unbelievably classy, with the standing ovation they gave Peyton Manning before the game.  This franchise has to be the luckiest team in sports.  The get one of the greatest quarterbacks of his generation, then immediately, get another quarterback who might be the next greatest of his generation.  Andrew Luck definitely showed that could be the case with his performance last night.  I also don’t understand why Jim Irsay keeps saying moronic things to the media.  Maybe he should appreciate the fact that Peyton put his franchise on the map, instead of talking shit on him.  This is probably what Peyton Manning’s text inbox looked like after the game….. 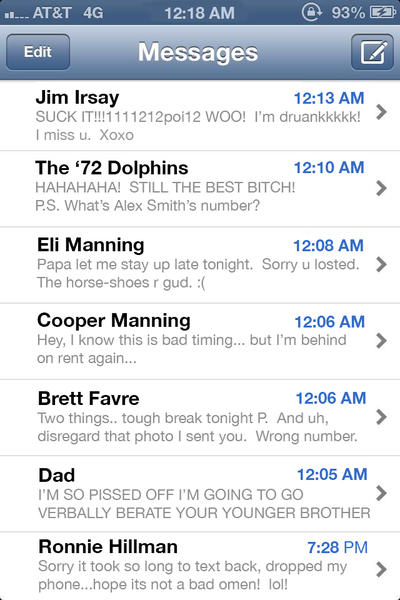 The Colts have a beautiful stadium, but I don’t understand all these ridiculous banners they have hanging in Lucas Oil.  Seven of their banners say “AFC Wild Card” on them.  Are you kidding?  That’s like putting up a banner just for making the playoffs!  The Colts are a great franchise, but that makes them look pathetic.

Speaking of banners, I can’t believe that it actually took this long for the Clippers to decide to cover up the Laker championship banners during their games.  I don’t find this offensive at all to Laker fans.  If you were playing in your home building, you would probably feel pretty awkward about having another teams championship banners and retired jersey’s above your floor.  It’s not like those banners and jersey’s are coming off the wall folks, they are just being covered up until the Laker games.  Besides, it’s not like the Clippers have any championship banners of their own to cover them up with. 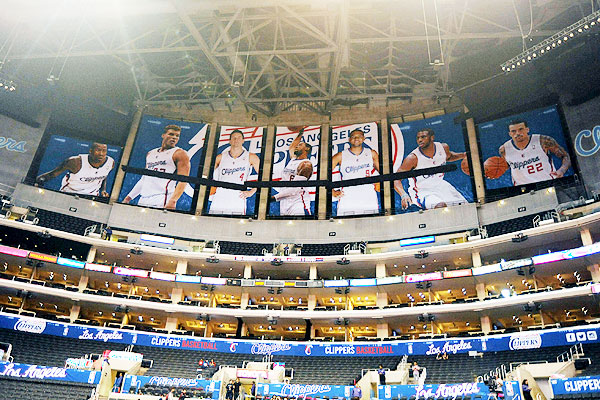 Finally, some strong starts in the NHL for both of our local squads.  The Kings have won 6 of their first 9 games, which is impressive for a few reasons.  First, many of their early games were on the road.  Second, their top two centers, Anze Kopitar and Mike Richards, have yet to score a goal.  It’s always been about defense and goaltending for these guys, but the dudes that need to score have got to put the puck in the net.  At least the Kings can say they are getting a “balanced attack” from their top two center.

Then there’s the Ducks, who have won 7 in a row, and are off to another great start.  This is so typical of a Bruce Boudreau coached team.  Only the Sharks and Penguins have scored more goals than Anaheim so far.  Even Victor Fasth looks as brilliant in goal as he did at the beginning of last season.  Let’s see what these guys look like in a few months before we start planning that Stanley Cup parade at Disneyland.