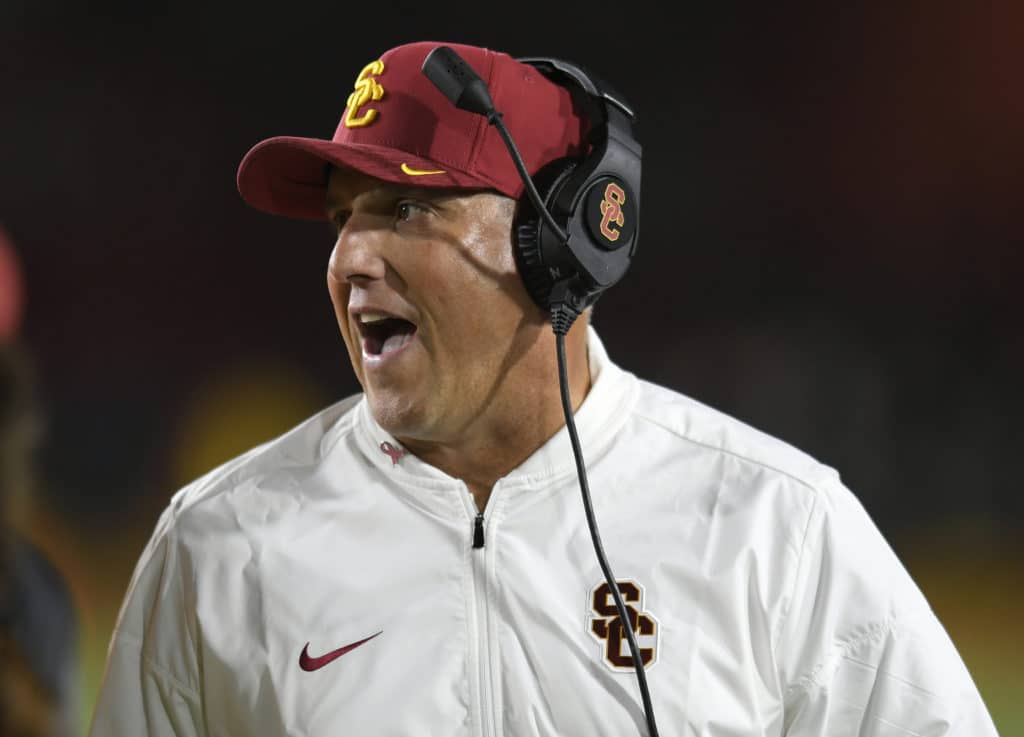 Clay Helton is going to remain the USC coach.  Somewhere, UCLA fans are doing the Carlton dance.  I don’t remember a team that once had Top 10 talent that couldn’t even finish in the Top 25, let alone become bowl eligible.  Despite putting up a decent fight against Notre Dame, it’s become so bad that many Trojan fans don’t even care anymore.  They had less than 60,000 people show up to the Coliseum on Saturday night.  This is no longer a Clay Helton problem, it’s a Lynn Swann problem.  How can Helton have a $15 million buyout? The man isn’t even one of the top 6 highest paid coaches in the conference.  That’s a complete administrative failure, and the fact Swann is sticking with Helton after a total debacle tells you that he is the man responsible for this.  Get ready for another season of boos and angry Trojan fans.

Meanwhile, UCLA got punched back to reality by Stanford.  Memo to Chip Kelly: you might want to upgrade your defense in the offseason.  The Bruins gave up 40 or more points in four games this season.  They probably also need to find a better quarterback now that Wilton Speight will be graduating.  New coach and they still can’t beat Stanford.  I’m amazed at how other Pac-12 coaches are looking at the Bruins and think they might be real contenders next year.  That’s like being in an MBA grad school program and thinking all 5 girls in your class are super models.  The conference is terrible, the promise that the Bruins might have shown didn’t bank them any more wins, and their offense isn’t what Chip Kelly’s used to be.

If you think that’s disappointing, you should have seen UCLA basketball over Thanksgiving weekend.  After playing the equivalent of high school varsity teams in their first four games, the Bruins looked like they didn’t even belong in the same gym against 11th ranked Michigan State and 7th ranked North Carolina.  It was so bad that Michigan State players were commenting on how immature and disjointed the Bruins looked, and how they were able to take advantage of that.  The real word here is structure, and UCLA has none of it.  That’s all coaching, and Steve Alford isn’t providing that.  Guess Alford has no more of his own kids to play to try and save the season.

To the NBA where the Lakers layed an egg yesterday at home against Orlando.  If I didn’t know better, I would think Nikola Vucevic was the 2nd coming of Wilt Chamberlain.  Vucevic dropped another 31 points and 15 rebounds on the Lakers, about a week after crushing them in Orlando.  The Laker record is ok at 11-8, but they would be a hell of a lot better if they stopped producing more turnovers than Betty Crocker.  Heck if they had just a few less turnovers, they would probably be winning many of these games by double digits.  On the bright side though, Brandon Ingram is delivering, making the rest of you look foolish who wanted to trade him a week ago.  Nothing can stop this guy from looking like a fool though….

Speaking of the NBA, Dwight Howard’s life seems to be getting worse by the day.  The latest is Twitter roasting him over his sexual preferences after a gay man accused him of cheating on him.  I could care less what his sexual preferences are.  However, Dwight might be the most unlikable person in the league.  Had he come out of the closet earlier, he might have actually improved his reputation because of the support he receives.  I guess his lack of mental toughness goes way beyond the basketball court.

To the NFL, where the Chargers destroyed the Cardinals yesterday.  Philip Rivers tied an NFL record with 25 straight completions.  Coincidentally, 25 is also the number of children he’s created.  The only bad news is that Melvin Gordon went down with a knee injury that looked pretty serious.  Hopefully he’ll be ok because the Bolts will need him if they want any chance of beating real opponents come playoff time.  Meanwhile, I love how the team announced a sellout crowd yesterday, while the stadium was half empty.  I suppose it’s better than having a stadium full of the visiting team’s fans.  However, think about this: At an average $190 per season ticket with 6,000 no-shows, that means people spent over $1,000,000 yesterday to not watch Charger football.  That’s exactly how much people don’t give a crap about them.

Elsewhere around the NFL, your goal in life should be to find someone who loves you as much as Cris Collinsworth loves Aaron Rodgers.  The Bengals haven’t won a game since Hue Jackson joined their staff.  He’s like a plague for NFL teams.  The Redskins got crushed on Thanksgiving like it was 1492 all over again.  Nothing says Thanksgiving like muting Joe Buck so you can hear a crazy rant by your uncle during the Cowboys game.  Legend has it the Chiefs and Rams are still somewhere scoring touchdowns.  The Colts won and Andrew Luck cursed in his postgame interview for the first time ever.  The Bills beat the Jags, but the real winners were the two people in the Bills Mafia who were filmed having sex in the parking lot during a tailgate.

Finally, the mid-season finale of The Walking Dead went down on AMC last night.  Spoiler alert for those of you who have yet to see it, so read no further if you plan on watching it later.  How did the show manage to kill off another character, yet it wasn’t Eugene? That guy is a bitch and deserves to die.  At least Jesus died as a hero, however, his story feels like it had a very unsatisfying ending.  He just took over as leader of Hilltop, and even might have had some romance brewing.  I assure you that everyone was far more worried about the dog than they were about any other character on the show.  That had to be one of the scariest episodes the show has produced in years.  How sick do you have to be to be wearing the skin of dead people? Carol’s new hairdo makes her look like she’s headed to a Lord Of The Rings convention.  You would think Negan would have gotten out of his cell through some elaborate Ocean’s Eleven type plan.  Nope, Gabriel just left the cell open.  That would have been a really great episode the week of Halloween.  It’s only been 3 episodes, but I’m impressed with what the show has produced without Rick.  Show me more! Well….in February.