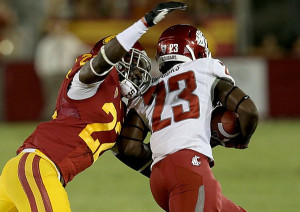 I think Mike D’Antoni just sent Lane Kiffin a fruit basket.  Kiffin just experience that awkward moment where your team loses its first home opener in 10 years, to Washington State.  The Trojans lost to the Cougars 10-7 on Saturday night at the Coliseum, and the fans let Kiffin know about their displeasure after the game, as they booed him coming off the field.

USC had a 7-0 lead late in the first half, but Damante Horton intercepted a Cody Kessler pass, and returned it 70 yards for a touchdown.    The score remained tied until the 3:03 mark of the 4th quarter, when Andrew Furney kicked a 41 yard field goal to put the Cougars on top for good, 10-7. Horton secured the win for WSU by intercepting a pass from Max Wittek with 2:18 left to play, and the Cougars won their first game over the Trojans since 2002.

Once again, the USC offense was nowhere to be found.  Kiffin used two quarterbacks again, and neither one was effective.  In the first half Cody Kessler was 8-13 for 41 yards with an interception. He did score the Trojans only TD of the game, with a 4 yard run in the 2nd quarter.  Max Wittek came for the 2nd half, and he was even worse, going 3-8 for only 13 yards and an interception.  Even Marqise Lee was bottled up, as he had 7 reception for 27 yards.  Then again, it’s pretty hard to have a big game when neither of your quarterbacks are completing a pass for more than 8 yards.  The Trojan offense managed just 193 total yards, while missing a field goal and having another one blocked.

The only two bright spots for USC were Tre Maddon, who rushed for 151 yards, and Trojans dominant defense.  Southern Cal held the Cougars to just 7 yards rushing, while forcing 3 turnovers.  It was their effort that set up the Trojans only touchdown of the game, as they forced a fumble, and gave them the ball at the Cougars 22 yard line before Kessler scored.

The Trojans have looked dreadful in their first two games.  They escaped Hawaii with a win, and seem to have been exposed early by Washington State.  The offense is going to have to improve, or else this is going to be a very long and ugly season for USC.  After watching Kessler and Wittek’s pathetic performances on Saturday night, Kiffin will probably not be any closer to committing to a starting quarterback moving forward.  That’s probably because he barely lets these guys play quarterback when they are in the game.

The expectations this year were much lower for Lane Kiffin coming into this season.  However, even Pat Haden did not expect a loss to WSU at home.  Last night may very well have been the beginning of the end for Lane Kiffin.