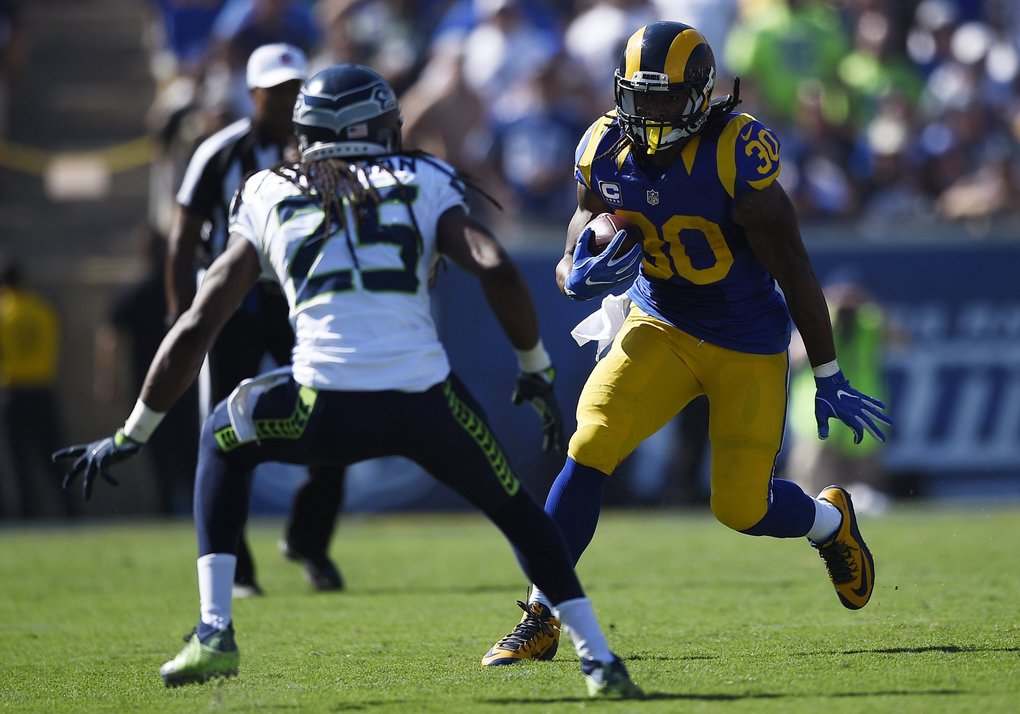 Well we’ve waited for over 20 years for NFL Football to return to LA, and after a really ugly first game, it was nice to see the Rams find the win column in their home opener.  It was ugly, but it got the job done.  The nostalgia of Pete Caroll coming back to the Coliseum was cool for a moment too.  Then the Rams started playing football, and we came to the realization that watching the offense is like watching a dumpster fire.  The Rams are scoring less than Steve Urkel on Prom night.  But the Rams defense was tough, Russell Wilson was banged up, and for some reason this team seems to own the Seahawks.  Still, it’s not a great feeling right now knowing LA gave away a truck load of draft picks for a guy that’s barely cutting it as their backup quarterback.  Oh, and after all this mess, Jeff Fisher was just rewarded with a 3 year extension.  He hasn’t had a winning season since George W. Bush was in office, yet somehow, he pulled this off.  Further adding to our frustration is the fact that now that the Rams are playing football in LA, we don’t get to see as many great NFL games on TV like we used, since the networks don’t want to take coverage away from our new NFL team.  It’s everything you’ve been dreaming about the last twenty years right?  Enjoy yesterday’s win because it might not get much better for a while.

Elsewhere around the NFL, how sorry are the Miami Dolphins? The Patriots have 3 quarterbacks that are better than Ryan Tannehill.  There goes the #1 running back on my fantasy football team after Adrian Peterson went down with a big knee injury last night.  AP was carried off the field, and dragged through a TGI Friday’s on the way to the locker room.  The Chargers may have beaten up on the Jags, but they suffered another big blow with the loss of Danny Woodhead.  That Broncos defense looked even better than last year in their win over the Colts.  Julio Jones shows a little emotion after a big TD in the Falcons win over the Raiders, and he gets a flag.  Let these guys have a little fun! I would have thought that Steelers win over the Bengals was played at a correctional institute given the number of players on both sides with criminal records.  What happened to all the offense we were promised in the Saints-Giants game?  Jameis Winston had more turnovers yesterday than Betty Crocker.  Neither team was all that impressive.  The Browns had a 20 point lead after 11 minutes in their game with the Ravens, so it’s only natural they lost.  Cam Newton is a beast.  Who is calling the Redskins plays? A member of the Obama administration? Not a single run around the goal line in their loss to the Cowboys.  The Texans don’t win pretty, but they’re 2-0.  Not as ugly as that Titans-Lions game.  Andre Johnson is still in the league after last season’s debacle? Bills and Jets on Thursday night football.  It’s like the NFL asks themselves what the worst possible game is that they could give us.

Let’s go to college football, where the Trojans fell flat on their faces again against Stanford.  Everybody’s immediate impulse is going to be to break out the pitchforks and tiki torches and blame Clay Helton.  Although the play calling is a little strange at times, and their three games have been filled with penalties and undisciplined play, there’s something to be said for just how good the USC talent is.  You can talk about how great the talent is until you’re blue in the face, however, if you have all this undeveloped talent, then you really aren’t that talented.  The defensive line looked very overrated and overmatched on Saturday.  Max Browne is nothing special, and I thought the plan was to be a running team, and go back to old school Trojan football? These guys don’t really seem to know their own identity.  Maybe everyone just needs to come to grips with the fact that Matt Leinart, Carson Palmer, Reggie Bush, Lendale White, and Mike Williams were in a college football class of their own, as was Pete Carroll.  Trying replicate that anytime soon isn’t going to be easy.

Then there’s UCLA, who came away with an ugly and unimpressive win against BYU.  How many times do I have to hear Josh Rosen tell me about how bad he played, and how much better he needs to be? Ok, I get it, you’re trying to be accountable.  However, it doesn’t do anybody any good to tell us where you suck when you don’t fix it.  His play is just too uneven, with a lot of missed throws, the Jim Mora coaching is starting to be suspect, and there isn’t much of a running game.  The only good news for the Bruins is that they only play one more elite team, which will be when they host Stanford next week.  Despite all their flaws, they still stand a great chance to win the Pac 12 South.  They just might take a Buster Douglas like beating next week at the Rose Bowl though.

Just in case you thought the Notre Dame football season wasn’t over with their loss to Texas during week 1, you can be assured that Irish fans hopes and dreams have been shattered after that loss to Michigan State.  Even more infuriating is Brian Kelly’s continued support for defensive coordinator Brian VanGorder.  I’ve seen better tackling in Pee Wee football than I have from the Irish defense this season.  I was rather disappointed to learn that Kelly did not actually like a tweet regarding firing VanGorder.  Elsewhere around college football, Lamar Jackson is killing it for Louisville.  However, if he were smart he would retire at the end of this college season so he can avoid being drafted by the Browns.  Ole Miss wishes that all their football games against Alabama could end at halftime.  Iowa is devastated over their loss to North Dakota State.  At least they still have corn.  Oklahoma’s defense should have just taken a knee for the last quarter of that Ohio State game to protest their coaches oppressive treatment of making them cover Noah Brown.  His TD catch was amazing.  This is how you do it Dez Bryant…….

To baseball, where the Dodgers took two of three from Arizona over the weekend, and their magic number is down to just 9 games to clinch a fourth straight NL West title.  Now the sorry San Francisco Giants are coming to town for a three game set.  As dangerous as I think the Giants could be in the playoffs, I think it’s probably better for LA if they get in and play the Cubs.  San Francisco might actually be able to catch lightning in a bottle in a short series and knock off Chicago.  I think the Boys in Blue have no chance against the Cubs ridiculous lineup, but they could take the Giants in a playoff series.  Then again, I’m not so sure they could beat anybody else like the Nationals either.  I was very disappointed to learn that the Dodgers couldn’t make that Yasiel Puig and Brandon McCarthy trade for Ryan Braun happen a few weeks ago.  I would have even offered to pack McCarthy’s bags and drive him to the airport, given how useless he’s been.  Hopefully this trade gets revisited in the offseason.  I wish the Dodgers front office would cut bait faster with guys that just haven’t worked out like McCarthy.  It’s bad enough to make moves like that in the first place, but it’s even worse when you have people in your front office that can’t admit when they made a mistake.  Too bad Vin Scully is going to be calling it quits after October 2nd.  The man has earned the right to say goodbye when he wants to, however, I was under the impression that he came back because he thought the Dodgers had a chance to win the World Series, and wanted to be along for that ride.  The fact that he’s calling it quits prior to the postseason tells you everything you need to know about what he thinks of the Dodgers’ playoff chances.

There goes another Angel pitcher.  Tyler Skaggs is the latest player to go down, this time with a forearm injury.  At least there was no ligament damage.  It was good to see Alex Meyer get through five innings yesterday against the Blue Jays.  This sounds pathetic, but the Halos need to be thinking about all these little victories right now.  If they hope to turn it around in the next two seasons, it’s going to require finding these types of gems, and hoping a couple of them can turn into Major League ball players that can actually make an impact.  Otherwise the fans might as well spend their summers at Disneyland instead of the ballpark.

Finally, I’d like to thank the United Staes of America for “participating” in the World Cup of Hockey.  The U.S. laid an egg against a team that’s not even a real country, in Team Europe.  If I wanted to see Anze Kopitar dominate Ryan Kessler, I could have just waited to see the Kings play the Ducks when the season starts.  I get that the NHL is trying to monetize international play, instead of not being compensated when they send their players to the Olympics.  However, the tournament just isn’t the same, and it’s been so manufactured, that the players aren’t approaching it with any sense of pride for their country.  Team Europe? Team North America? Give me a break.  It’s no wonder that the Americans played that game like it was an all-star game they didn’t give a crap about.  Meanwhile, there’s some jerk sitting somewhere with a spreadsheet trying to come up with a reason why Jonathan Quick shouldn’t be starting for team USA.