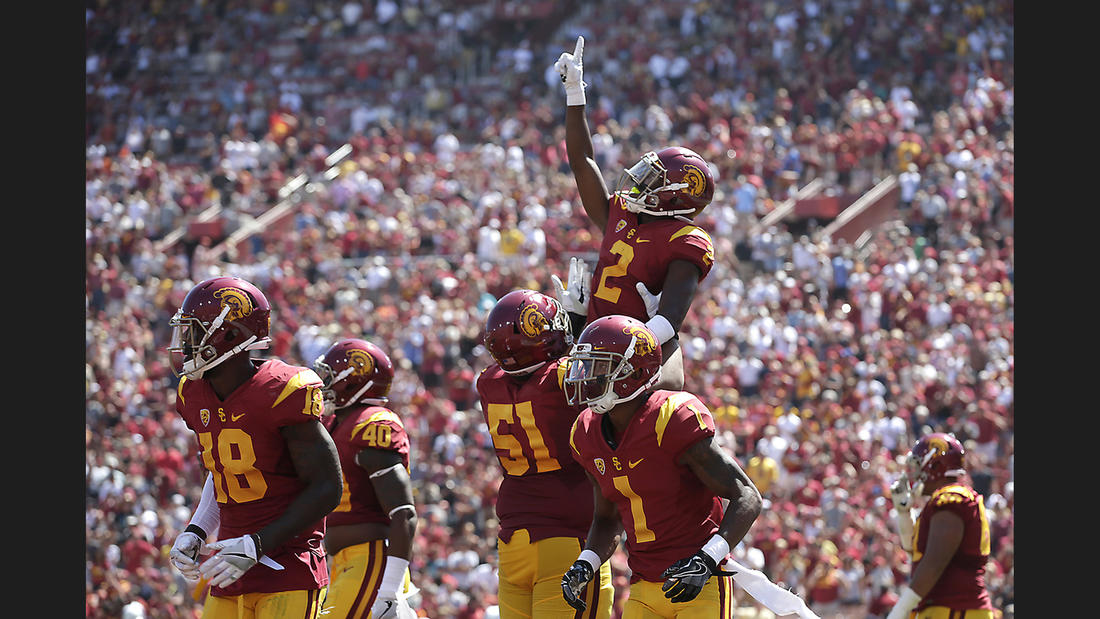 Well the Trojans got back in the win column on Saturday.  However, USC played a team that looked worse than a Stevie Wonder coloring book.  The defense was much improved and USC has some athletes, but I remain very unimpressed with Max Browne.  His numbers should have been huge against a team like this, his delivery is very slow, and his decision making is questionable.  It’s no wonder that he couldn’t beat out Cody Kessler for the starting QB job.  I’m also amazed at how undisciplined Clay Helton’s team is so far.  The latest incident came early on in Saturday’s game when sophomore offensive tackle, Chuma Edoga, was ejected for making contact with an official.  I’m reserving true judgement until next week, when the Trojans travel up north to take on Stanford.  The truth is somewhere between last week’s loss to ‘Bama and this week’s win against Utah State.  If anything though, it’s much closer to the former.

The Bruins had what was supposed to be a bye week of their own, but instead, they ended up in a big struggle with UNLV.  Even after the win, I’ve seen nothing in the first two games that make me think this team is any better than the team they’ve had the last couple of years.  Josh Rosen tends to miss some important throws, and his receivers are dropping even more important ones.  Meanwhile, the defensive line looks worse than tonight’s special at Olive Garden.  They’ve had one sack in two games, and being healthier than last year doesn’t hide their mediocrity.  The Bruins are once again a decent team, but far from elite.  I think it’s time to stop pretending like this team is ready to take the next step and win the Pac 12 Title, let alone pretend like they can contend for the College Football Playoff.  UCLA should be worried about next week’s final non-conference tune-up at BYU.  The ginger ale is going to be flowing in Provo if the Cougars pull off the upset.  The last time UCLA went up there they also lost 59-0, in a shocking beat down.

Elsewhere around college football, Notre Dame’s defense looked a little better, although their competition was a bit worse in Nevada, but they got back in the win column.  Clemson barely escaped against Troy, while Ohio State, Alabama, and everybody else in the top 25 played absolutely nobody.  Jim Harbaugh was celebrating a Michigan win by eating his own snot on the sideline (you’re just going to have to Google that one).  I hope most of these small schools that we’ve never heard of have cashed their checks already, since they basically agreed to take a beat down from these larger Goliath schools in the Top 25.  Central Michigan did pull of this crazy play against Oklahoma State though to pull off the upset.  If this happened while playing a video game, I still probably wouldn’t believe it……

The NFL is back, and week 1 was in full effect!  It took the Chargers exactly one game to do Charger things.  That might have been one of the biggest choke jobs in San Diego history, after they blew a 24-10 lead.  As if that isn’t bad enough, they lost Keenan Allen to probable torn ACL, and everybody else in their division won.  Might as well throw in the towel on the season.  The Patriots are probably going to be 4-0 while Tom Brady gets a month long vacation.  Even though Drew Brees plays every game like he’s playing Madden on XBOX, the Saints defense let them down again.  The Raiders look like they might contend!  Aaron Rodgers is pretty damn good at football.  The Jaguars are “so much better this year”, it only took them two minutes to have their first turnover.  Carson Wentz looked great for the Eagles.  I’m sure he’s used to playing teams about as good as the Browns when he was in college.  I’m also sure Dallas receiver Terrance Williams feels terrible for his bonehead play at the end of yesterdays game.  It’s ok Terrance, the loss isn’t on you.  You play for the Dallas Cowboys so it was inevitable.  Looks like AJ Green bought a house on Revis Island, because he and the Bengals dominated the Jets yesterday.  What happened to the Colts? Seattle dodged a bullet against Miami, and with the Russell Wilson injury.  I think the last time Cam Newton got hit as hard as he did on Thursday, it was when he rolled his pick up truck.  Still not sure how there was no flag on that play, or how he doesn’t have a concussion.  Here’s a look at everyone’s reaction once they found out the ESPN fantasy app was down……

The Rams have got to come up with a win tonight in San Francisco.  The division is going to be tough enough having to play four games against Seattle and Arizona.  The Rams defense is good, but given their limitations on offense, their defense needs to be as dominant as the Broncos to be successful.  Their starting quarterback is truly nothing more than a game manager, and their wide receivers cannot be relied on.  Nevertheless, NFL football is back in LA, and tonight is the night the Los Angeles Rams return to action, which is exciting enough.

To the NBA, where Shaquille O’Neal was inducted into the basketball hall of game last week.  Shaq is one of my favorite players of all time, and watching him win three titles with the Lakers was a pleasure.  However, Shaq came out and said that Tim Duncan is not considered “a big man”, since he is really a power forward, and not a center.  He went on to say that Duncan is not in the same class as Kareem Abdul-Jabbar, Wilt Chamberlain, Bill Russell, Hakeem Olajuwon, and himself.  I do agree in principle with Shaq’s statement that Duncan is a power forward and not a center.  However, if Tim Duncan were considered a center, he’d probably be the 6th best center to ever play the position.  Duncan was arguably the best defensive player of all time, and a top 10 great.  Shaq is too, and while he was the most dominant ever, I think he simply felt the need to separate himself from Duncan because he knew his teams came out on top most of the time when they met in the playoffs.

The Dodgers are unbelievable.  On Saturday night, for the 2nd time this season, they removed a starting pitcher from a game that could potentially have been historic, had they been allowed to complete it.  This time, Rich Hill had a chance to pitch a perfect game.  He only needed 6 more outs. Do you realize there are only 23 perfect games in the history of baseball? Manager Dave Roberts claims he was pulled because he had concerns about his blister reopening.  If 20 more pitches were going to put this guy back on the disabled list, then he’s not nearly as durable as he should be coming down the stretch.  The game wasn’t even in jeopardy.  Of course when Joe Blanton came in, he blew the perfect game.  I also don’t think the call was made my Roberts.  I think as usual, he got the call from the front office, and Andrew Friedman told him that Hill needs to be pulled.  I keep hearing about the need for preserving players for the future, like the Dodgers are doing with Julio Urias now, Ross Stripling earlier in the season, and now Rich Hill with his blister issue.  I wonder how the Washington Nationals feel about this strategy, since four years ago they limited Stephen Strasburg’s innings to prevent injury.  That strategy came in the middle of a season when they were a contender for the World Series, yet they came up short in the playoffs.  Four years later, that future they were saving for has yet to arrive.  You never know when the opportunity will be as good as it is now.  Andrew Friedman has never understood that from the moment he started working here.

The Angels came up with a win yesterday against Texas.  Jered Weaver made one of his final starts for the Halos, and managed to put together a performance that was so good, I’m wondering if he entered a time machine to become the player that he was 5 years ago.  I’m thinking bringing Weaver back to the team next year on a short and cheap deal wouldn’t be terrible.  The Angels need arms, and Weaver might be able to fill in at the back end of the rotation.  He might even be better served re-inventing himself as a bullpen guy too.  Speaking of re-inventing players, the Angels are also doing so with recently acquired Alex Meyer.  Meyer was a reliever for the Twins, despite the fact he wanted to be a starter.  The Halos are now planning on using him as a starter, and hope he can be a gem for them in 2017.  Meyer showed some potential last week, but he’ll need to work on his control to be successful.

Finally, we just went through a weekend where the Dodgers, UCLA, and USC were all in action, yet not a single DirecTV customer could see them.  That means that 70% of cable subscribers in Southern California could not see any of these teams in action.  Have the cable companies given up on reaching a deal? It sure feels like it since DirecTV doesn’t even want to come to the table to negotiate with Time Warner Cable.  The cable model is totally broken, and ultimately, it’s the sports fan that is really paying the price.