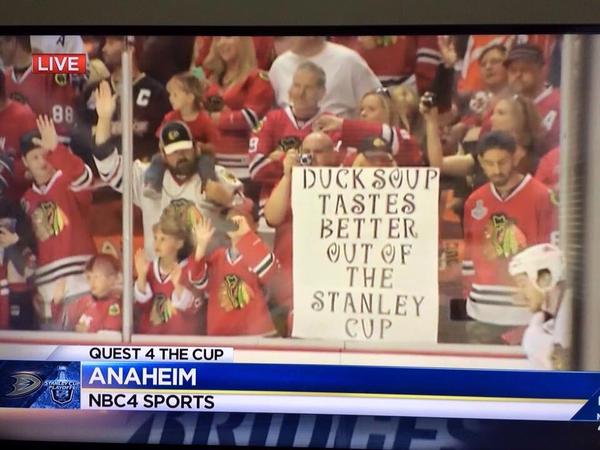 The Ducks had you fooled.  You thought they had overcome the playoff demons.  You thought wrong.  For the third straight year in a row, the Ducks lost a game 7 at home.  In each one of those series, the Ducks had series leads of 3-1, 3-2, and 3-2.  If I didn’t know better I’d say this team was coached by Bruce Boudreau.  Oh wait….they are.  Boudreau has now been behind the bench for 6 losses in game 7 at home in the playoffs.  Do you realize that accounts for 10% of the 63 teams that have lost game 7 at home in NHL history? In all these game 7’s the story has been the same as it was on Saturday at the Honda Center.  The big names like Ryan Getzlaf failed to perform, and there was a total lack of poise and discipline.  Another nice regular season followed by a playoff disaster.  If the Ducks are serious about winning a cup, they’ll go out and get themselves a coach who can put them over the top.  Their fans however don’t seem that serious though, because the arena was filled with Blackhawk fans on Saturday night.  The only parade they’ll be seeing in Anaheim this year will involve cartoon characters at Disneyland.

To baseball, where it was a very familiar scene this weekend in St. Louis.  The Dodgers take on the Cardinals.  They can’t score any runs.  The Cards make them look like chumps and LA loses two out of three.  I don’t care how talented the Dodgers may seem.  The season is going to come down to the same thing we’ve seen the last two seasons.  Can they beat the Cardinals in the playoffs?  Can they beat the Giants when it matters?  Right now, both of those teams have a much greater championship pedigree than the Boys in Blue, who not only can’t score runs against these elite teams, as I predicted, but are also struggling to find rotation depth.  The new nerdy front office also managed to trade another quality player last week, Juan Uribe, for pennies on the dollar in return.  The Dodgers have infield and outfield depth coming out of their ears, they are desperate for starting pitching, but these baseball nerds keep unloading talent just to have more clubhouse harmony, and without filling those other needs.

As for the Angels, they may have swept the Tigers over the weekend, but how annoying is it seeing Josh Hamilton tear it up back in Texas?  The Halos are desperate for production in left field, as the Collin Cowgill and Matt Joyce tag team has been about as successful as two bad little leaguers in the lineup everyday.  Although Joyce has been better of late, those two have been so bad that the front office actually thinks that acquiring Kirk Nieuwenhuis, a career .230 hitter, will solve their problems.  If Arte Moreno had never opened up his big mouth in the first place, the Angels might be getting some return on their ridiculous investment.  It’s probably also about time the Angels stopped messing around and made Carlos Perez their everyday catcher.  All things considered, things could be a lot worse for the Angels, but they certainly need to be a lot better.

Who the hell is Jared Dudley anyway?  The Milwaukee Bucks forward went on a media blitz last weekend, seemingly trying to preview his broadcasting career.  In an interview with Colin Cowherd, he claimed that nobody wants to play with Kobe, it will be a while before the Lakers are good again, and went on to say some other nonsense like how Carmelo Anthony is the most overrated player in the league.  Look Jared, 5 championship rings aren’t for everyone, and certainly not for you.  You may not want to play with Kobe, but I’m sure if I ask a whole lot other guys (Pau Gasol, Steve Blake, Derek Fisher, and Matt Barnes just to name a few) they would love to.  Some guys just don’t want the pressure of having to win championships every year, and apparently you don’t want that which is why you’d rather play in a small town like Milwaukee.  Too bad when your contract is up, there aren’t going to be many teams that want you.   Jared is still probably upset about Kobe doing this to him a few years ago…..

As for the recent rumors about Dwayne Wade leaving Miami, I’ll believe it when I see it.  Wade is upset, and rightfully so, that he opted out of his contract last year in order to take less money so the team could re-sign Lebron James.  Since that didn’t happen, Wade now wants to be paid max dollars since he’s the face of the franchise.  He may be the face of the franchise, and still productive when healthy, but those healthy times are rare.  Nobody is going to pay Wade more than the $16 million per season Miami could next season.  The notion that the Lakers would is silly.  They’d be tying up money in two players in Kobe and Wade that would be on the injured list most of the time.  Then again, this seems like something the Knicks would do if Wade doesn’t work things out with the Heat.

I can’t believe we have to wait a whole week for the NBA Finals.  This is good news for both the Cavs and the Warriors since both Klay Thompson and Kyrie Irving have time to recover from injuries.  I’m thinking the Warriors are going to take this in 6, especially without Kyrie being 100% healthy.  The Warriors have a deeper bench, and as good as Lebron is, he can’t guard everybody.  Even though the East is a JV league, the fact Lebron got his injured team this far is impressive.  Speaking of those injured teammates, Kevin Love said he expects to play opening night next season with the Cavs.  He must be assuming that the Cavs will be playing the Lakers that evening.

What a total embarrassment the Chicago Bulls organization was last week.  As expected, Chicago fired Tom Thibodeau.  However, not only did they fire him, they completely trashed him on his way out, and the front office looked like nothing but a bunch of classless and jealous clowns.  NBA coaches aren’t exactly treated all that well, often like that trashy girl that hooked up with every guy in high school.  The Bulls are notorious for this over the years with all their coaches, including the greatest NBA coach of all-time, Phil Jackson.  I’m surprised that any coach, including Fred Hoiberg, wants to take a job like that knowing the front office could stab him in the back at any time.  Thibodeau has his flaws, but he’s still one of the better coaches in the NBA, and will be back on his feet in no time.

Speaking of embarrassments, Sepp Blatter and FIFA are just that, after that story broke last week about all the FIFA officials being arrested.  Blatter’s re-election, along with his embarrassing statement that threatened those that didn’t vote for him, are a reminder of how much political corruption exists abroad.  Blatter is aligning himself with those states that see the sport as a means to cement their position on the world stage.  In return, those nations help Blatter maintain a grip on the job.  Did the U.S. and England try and set up Blatter for the fall?  Probably, but I can’t blame them.  However, the sad part in all this is that US sponsors probably don’t care enough about soccer to stop their support of FIFA.  If enough people really cared about soccer, public pressure would force those sponsors to re-consider their support.  That tells you just how little people care about soccer in this country.

This Adrian Peterson situation may seem like a lost cause since he has no leverage, but he’s trying to fight a bigger battle.  Peterson says that his decision not to participate in OTA’s with the Vikings is not about wanting a trade, but rather securing his future with the Vikings.  Peterson believes he’s trying to fight for the Players Union, and ultimately move them closer to guaranteed contracts.  Unfortunately, Peterson is the wrong guy to lead this fight.  He’s a player coming off some off the field issues that make him look like a child abuser in the eyes of some.  Whatever you think of Peterson, he isn’t the guy for this fight.  It should be a a guy like Russell Wilson, who commands respect from the owners, and who’s big payday is around the corner.  He also shouldn’t be leading this fight because it’s going to be devastating to my fantasy team if he holds out.

Finally, Game of Thrones went down on HBO last night, and by the end, it proved to be an exciting episode.  Spoiler alert for those of you who have yet to see it.  The Tyrion and Dany banter was a nice little appetizer for the audience before the big battle at the end.  Even though when Tyrion mentioned that Ser Jorah was in love with Dany and it seemed to hit her hard, I was a little surprised that he was exiled once again.  It seemed like Tyrion’s motive for recommending this was to make Dany more dependent on him, even though she needs all the help she can get.  I loved the moment when Tyrion was defending Jamie and Varys.  It was like he was trying to apply for a job, while his would-be references all tried to murder his would-be boss.  I’m still amazed that after 7 episodes, we know nothing about what happened to Bran.

The imprisonment of Cersei would have been way more entertaining had she been in the same cell as Margaery.  How terrible is Tommen as a King since he can’t get his mother or his wife out of prison?  Cersei’s plan was to use Tommen’s weakness to have Margaery imprisoned, except the irony is that his weakness won’t be able to get Cersei out of prison now either.  Poor King Tommen….he’s now deprived of boobs and mom.  Then of course the big battle with the White Walkers ensued.  Who knew that a Valyrian sword could kill a White Walker?  I’ve gotta hand it to the writers of the show.  I wasn’t really sure how they would incorporate the White Walkers without some over the top fantasy elements.  However, they managed to retain the show’s dramatic yet sensible elements.  Hope the last two episodes of the season are just as good. 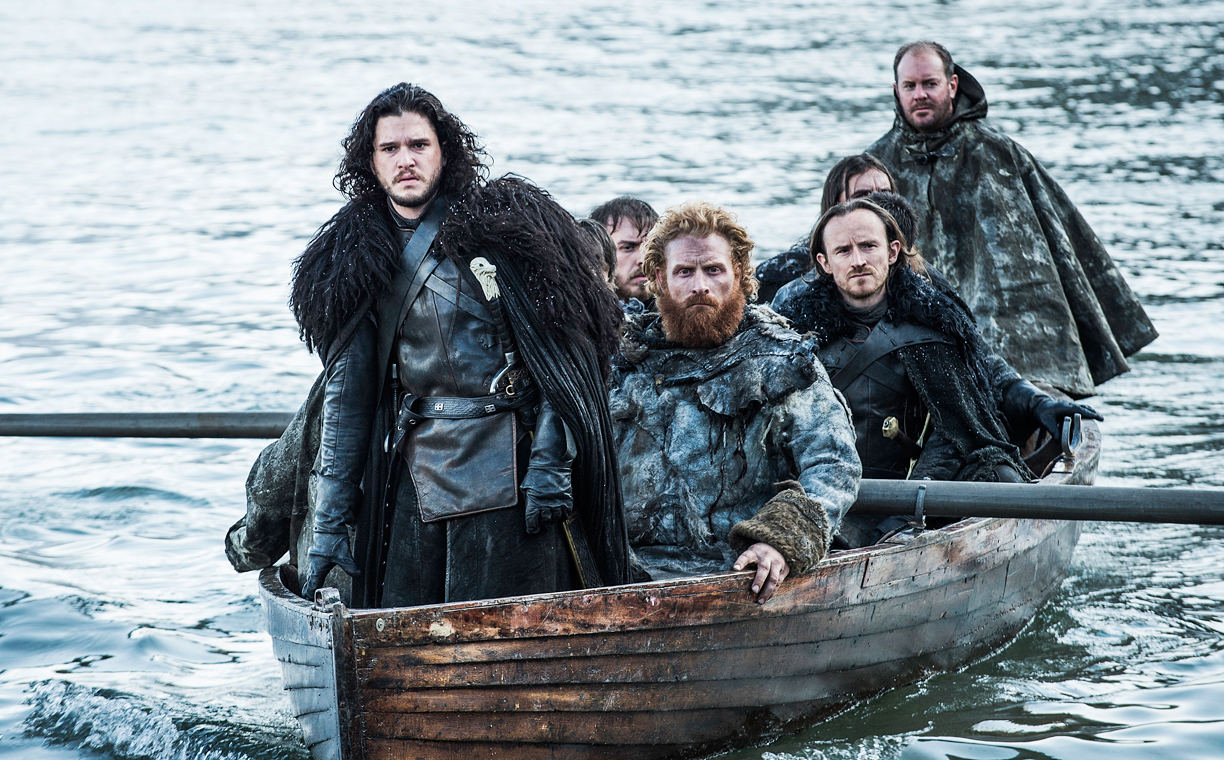