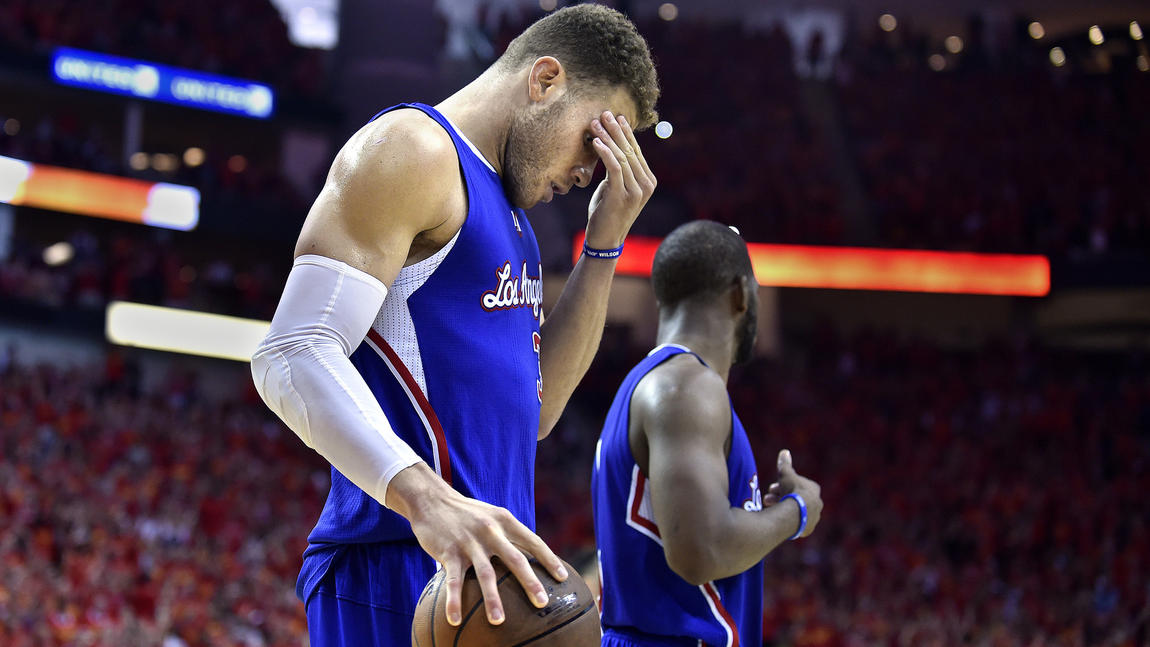 You thought things had changed.  You thought the Clippers were done being “the Clippers”.  Then in a matter of days they reverted to being “the Clippers”.  Yesterday, LA became just the 9th team in NBA history to lose a series after being up 3-1.  The Clipps and Rockets were two pyschologically flawed teams, but the Clippers proved to have the bigger flaws when it was over.  I realize LA doesn’t have much of a bench.  But the reality of it is, this was legacy defining for Chris Paul and Blake Griffin.  Those two players were far and away the most talented players in the series.  Yet when their teams needed them most in games 6 and 7, they failed to impose their will.  Blake went scoreless in the 4th quarter of game 6, and had more turnovers than Better Crocker in game 7.  Paul failed to go into attack mode late in game 6 and early in game 7 when the Clippers needed him most.  Winning in the NBA is a process.  However, the Clippers aren’t going through that process because they have yet to make it out of the 2nd round, even with the most talented team they have assembled in their franchises’ history.  When the moment gets big, the Clippers get small.  This is sob city, not lob city.

As for the off-season, it’s easy to say that the Clippers need to blow things up because the team can’t win as constructed.  However, blowing things up will probably set the Clippers back much further away from where they are now.   The first thing they need to hope for is re-signing DeAndre Jordan, even if it means giving him a max contract.  Once the salary cap goes up next summer, they need to hope they can lure a big name free agent like Kevin Durant to make them real contenders.  Even if they can’t make such a home run scenario happen,  the Clippers can still bring in some quality role players with championship experience to not only give them depth, but also give them the mental toughness they need to get to the next level.  This better happen quickly though, or Steve Ballmer might become a racist too.

Congratulations to the Rockets and Hawks, who have earned themselves the right to get swept in the conference finals.  If the Bulls couldn’t beat the Cavaliers without Kevin Love and a hobbled Kyrie Irving, they will never be able to beat a team with Lebron James on it.  With the Capitals and Wizards losing in the playoffs, last week was the worst week in DC since Obama was re-elected.  Looks like Dwight Howard fell one rebound short of the amount of illegitimate children he has in yesterday’s ball game.  If the Warriors can win a title this year, they will be the first team since Isaiah Thomas’ Pistons that has won a championship with a team that is built around its point guard.  So much for those of you who believe “it’s a point guard driven league”.  The Bulls may have lost, but Joakim Noah is still right about this……

Meanwhile, the Lakers are getting ready for an extremely pivotal moment for their franchise with Tuesday’s draft lottery.  The Lakers had the fourth worst record in the NBA, but they only get to keep their pick if it falls within the top 5, otherwise it goes to Philadelphia.  Do you realize that in the thirty NBA draft lotteries, only 13% of the time, has the team with the worst record gotten the top pick?  The team with the 4th worst record has won it once (1987 when the Spurs selected David Robinson),  while the team with the 3rd worst record has actually won it the highest percentage of the time, at 23%.  Just knowing about those odds should make you feel like the whole thing is rigged, and that the Lakers could very well lose their pick.  Given how “anti-Lakers” the NBA has seemed since the last lockout, I’m thinking LA will either get the 5th pick, or lose their first round pick.  If they lose the pick, that sets the Lakers back a good three years in their rebuilding process.

Let’s go to the ice, where the Ducks and Hawks finally faced off for game 1 of the Western Conference Finals yesterday, and Anaheim handled Chicago easily 4-1 to take a 1-0 lead in their best of seven series.  The Ducks are getting goals from guys named Nate Thompson.  That sounds like the name of a guy who should be selling used cars and not playing in the Western Conference Finals.  Neither teams star players did much in game 1, however, the difference was the Ducks got big offensive contributions from their 3rd and 4th liners as well as great goaltending, while the Hawks got neither.  I picked the Hawks when the series began, but Anaheim’s confidence is growing with every game, and looking like serious threat to win the cup.  Teemu Selanne was at the game, and he found a jacket that is uglier than the Masters green jacket……. 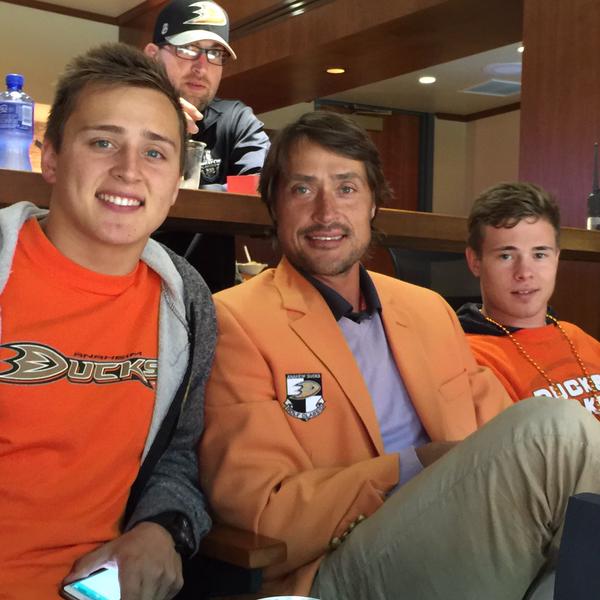 On to baseball, where the Dodgers came away with a 4 game split against the Rockies over the weekend.  They say a tie is like kissing your sister, but this felt a lot worse than that considering the Rockies are in last place in the NL West.  I still have no idea how the Dodgers have managed to put together the 4th best team ERA in the NL given that they only really have two legit starting pitchers, and Clayton Kershaw hasn’t even been his usual dominant self.  The irony of the Dodger is that 36 games into the season, despite being near the top of the NL, they have exactly  same issues as last year.  They have a stud closer in Kenley Jansen, but no reliable middle relievers to get the ball to him.  There are questions at the back of their starting rotation, and they have have a log jam of infielders, at third base in particular.  Andrew Friedman claimed the Dodgers were poorly constructed when he took over.  The reality is, they are just as talented, yet he still hasn’t fixed the flaws to get them over the hump.  Perhaps dealing an infielders like Juan Uribe or one of their outfielders might net them the extra rotation help they need.

Then there’s the Angels, who managed to take two of three against the struggling Orioles over the weekend, and are now winners of 5 of their last 6.  The good news for the Halos is that their pitching has come around, Jeff Weaver can get people out again, and they now have the best team ERA in the American League.  The bad news is that I’ve seen pimpled faced freshman scoring more than the Angels have this season.  Only the White Sox have scored fewer runs in the AL than the Halos, and just two teams have a lower team batting average.  Albert Pujols and David Freese are giving the Angels very little hitting at the corner infield spots, while the team is also getting nothing from their revolving door of left fielders.  Sitting at 5.5 games back of 1st place Houston, the Halos need to acquire a productive bat or two or else they will find themselves out of contention in no time.

Leave it Roger Goodell to keep Deflate Gate in the news last week.  In every other sport, we wouldn’t be talking about this anymore because we have consistent rules for punishment, and swift and decisive action taking place.  Now Goodell will probably sit down with Tom Brady and come up with some compromise.  Goodell is pretending like he’s running a league defined by integrity.  A league where he’s got an owner insisting on keeping a racial slur as its team’s nickname, and where all the owners are paying hundreds of millions to get their former concussed employees to go away and keep their mouths shut.  Tom Brady didn’t cheat.  Cheating is defined as having an unfair advantage over the playing field.  There’s no unfair advantage to be gained when the teams can provide their own footballs.  Besides, can you really blame Brady not wanting to turn over his cell phone to investigators?  He would gladly take a 4 game suspension than have Gisele find out who he has been doing on the side.

Last night’s Game of Thrones had a pretty intense and disturbing ending. Spoiler alert for those of you who have yet to see it.  Sana Stark gets raped by her new husband, Ramsay Bolton, on their wedding night.  As if that wasn’t horrifying enough, Ramsay made Theon watch is all go down.  Some of you actually thought Sansa’s first time was going to be with a good guy after Joffrey died.  WRONG.  She ended up with an even more screwed up husband who not only raped her, but made a guy without a penis watch.  I know a lot of people are going to criticize the writers for incorporating another rape scene into the show, but were talking about Medieval Times here people.  This is how things went down unfortunately.  I had way too much Arya in this episode.  Her story gets more uninteresting by the episode.  Has there ever been a weaker King than Tommen?  His wife gets detained in front of him, and he looks as befuddled as the Clippers do in a game 7.  Cersei is winning this battle, and she seems like she’s determined to do so no matter what the cost.  Tyrion talked his way out of another situation in which his fate appeared to be imminent death, and he’s still one of the show’s best characters.  Why the hell is Stannis taking so long to get to Wintefell?  I’m hoping things pick up in the last four episodes of the show! 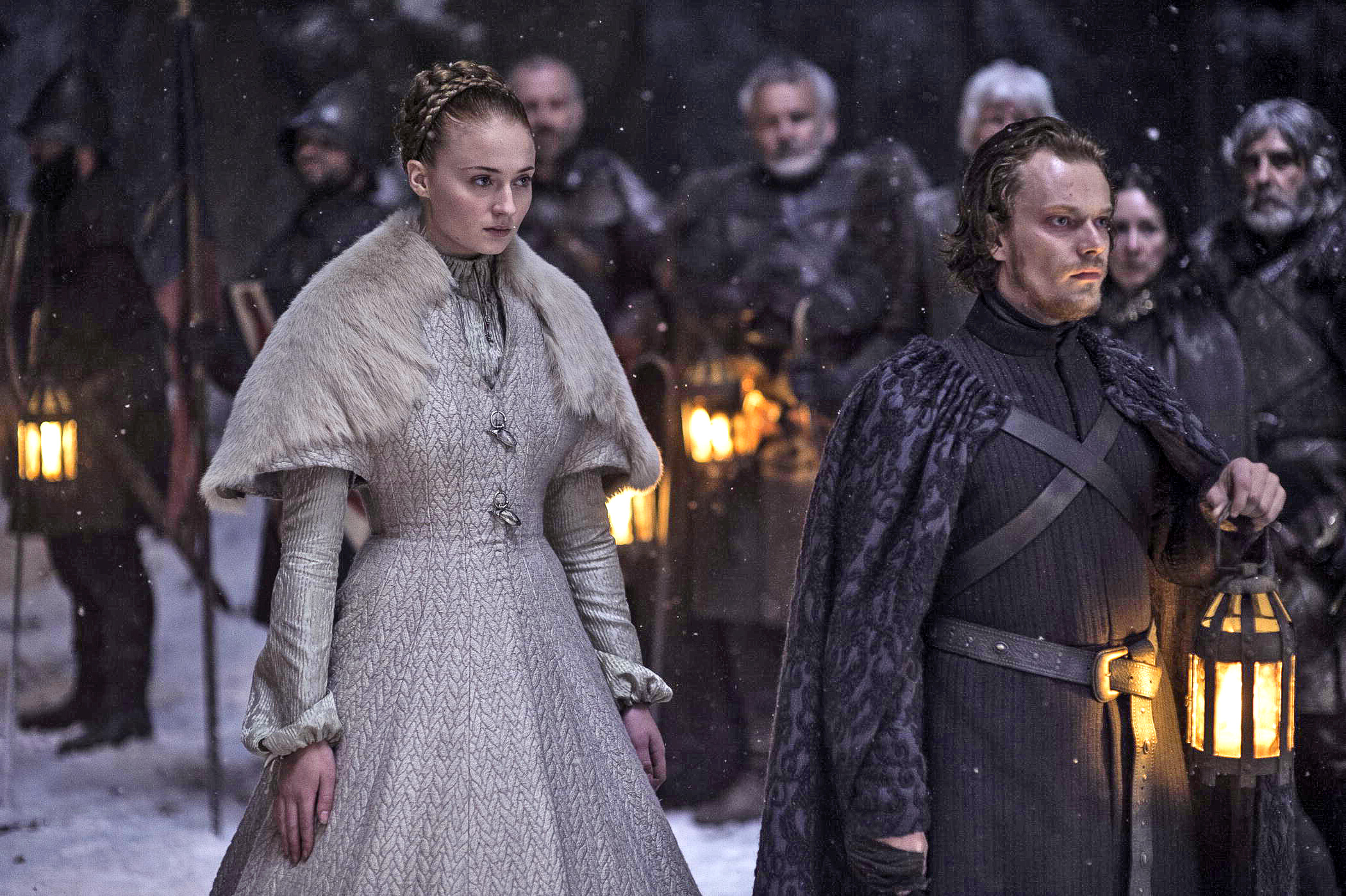