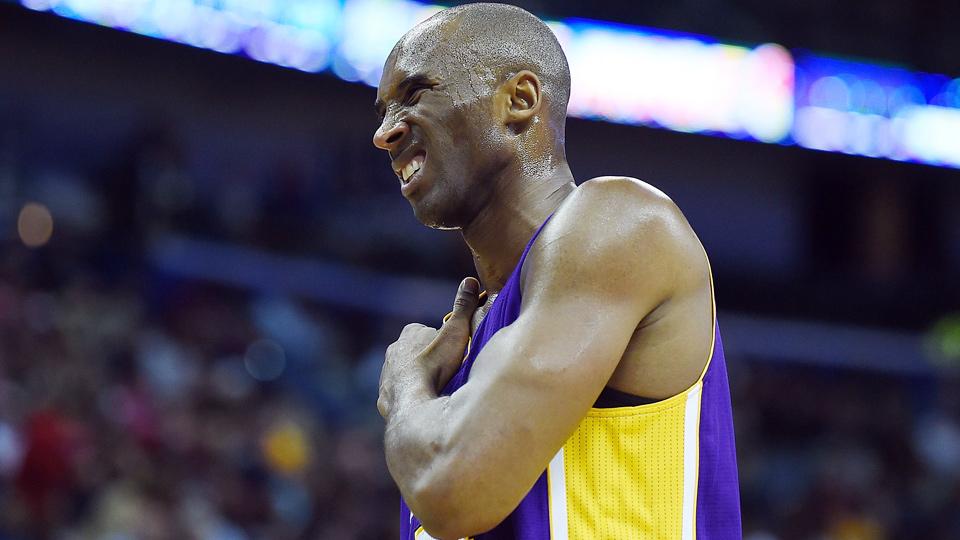 Sometimes the universe just tries to subtly send us messages.  I’m still a little unsure what message the universe was trying to tell me when Kim Kardashian showed her ass on a magazine a few weeks back, but in Kobe Bryant’s case, I think the message is much more clear.  He needs to retire.  This is why guards don’t usually play twenty years.  Their bodies can’t take it.  In addition to all of Kobe’s other ailments, now he’s got a torn rotator cuff, which will probably shut him down for the rest of the season and require surgery.  I realize that Kobe wants to go out on his own terms, but if he tries to come back again next year, the chances of another significant injury only go up, being another year older.  There’s also no big time free agent that would sign with the Lakers, knowing that Kobe could break any second.  Shut it down Kobe.  Do it for yourself and the Lakers, who will probably suck next year too.  By Thursday night, the Lakers might equal the longest losing streak in the history of the franchise.  The good news…..the Knicks are coming to town after that to prevent themselves from new levels of suckage.

As for the Clippers, they haven’t been so bad of late.  Winners of 4 straight, and now 8-4 against the top 8 teams in the West.  However, the interesting question of the week is whether or not  Chris Paul is going to make the Western Conference all-star team.  Paul deserves to be an all-star.  However, the Western Conference is stacked at the guard position.  I’m thinking James Harden, Klay Thompson, Damian Lillard, Lamarcus Aldridge, and Tim Duncan are guaranteed to make the team.   That leaves two more spots between CP3, Russell Westbrook, Kevin Durant, Dwight Howard, and Demarcus Cousins.  Even though he should be given the nod over most of those players who haven’t played as many games as him, or who are on teams lower in the standings, it won’t surprise me at all if he gets left off the squad.  The only thing that might help a few guys is the fact that Kobe is injured and will need to be replaced.

Sometimes the best trades are the ones you don’t make.  The Golden State Warriors have gotta be thinking that right now, after hanging on to Klay Thompson instead of trading him and David Lee for Kevin Love.  In case you missed it, Thompson scored 37 points over the weekend…..IN THE 3RD QUARTER!  It was an NBA record for most points in a quarter.  Suddenly, Thompson looks like he could be more than just a solid role player, and on the verge of being an NBA star.  However, if there are any Laker executives reading this today, the best trades are the ones that involve sending Jeremy Lin to another planet.  Here’s Oracle before and after Thompson’s shooting night…. 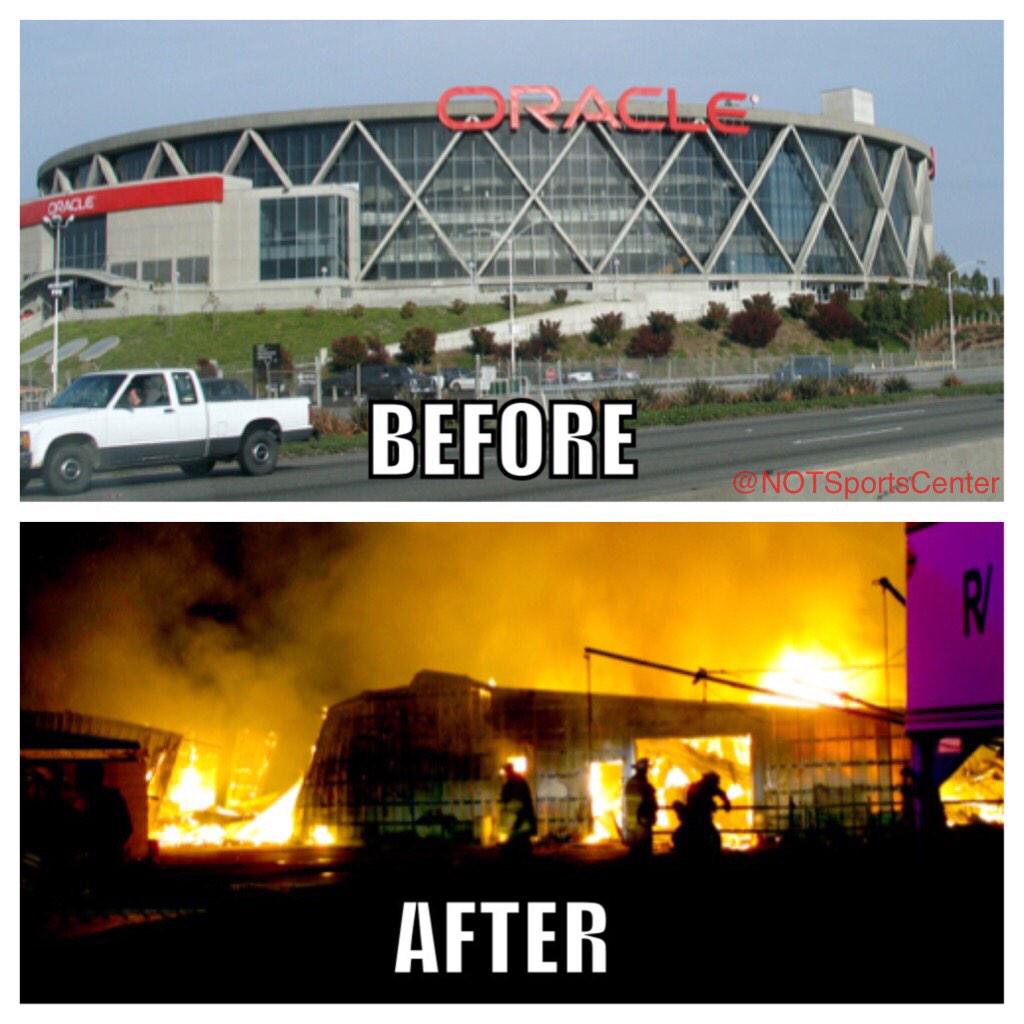 What would you football lovers have done all week without “Deflate Gate”?  We would have had absolutely nothing to talk about.  However, this whole drama brings up several key issues.  Why the hell does the NFL let teams provide their own footballs? That’s just asking for trouble.  Once again, the NFL has completely mishandled this issue from a PR standpoint, just like they mishandled the Ray Rice and Adrian Peterson situations.  Roger Goodell has been so incompetent, it’s like he’s preparing to be the next Presidential candidate for the Democrats.  The longer the league goes without saying anything, the less we really know what happened.  As for the Patriots, it really doesn’t matter whether they played with pebbles or footballs in the AFC Championship game, because they still would have kicked the Colts asses.  Still, it doesn’t really change the fact that these guys have historically been cheaters, which we saw from “Spy Gate”, so why would we think anything has changed?  Sometimes, the jokes just write themselves….. 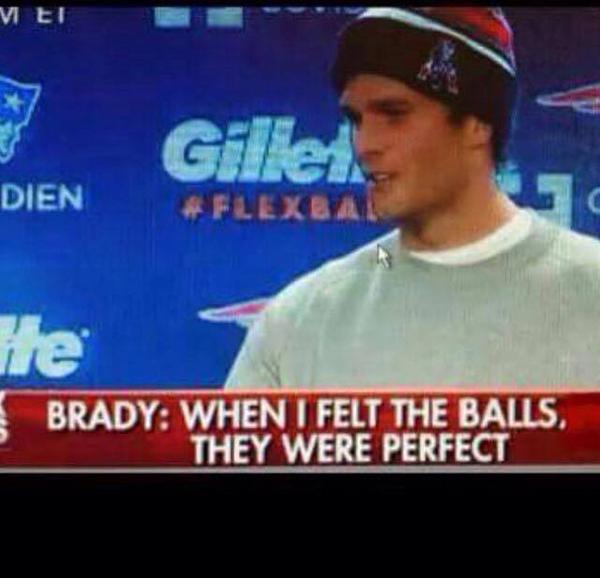 On to college basketball we go.  That was a cute little run by UCLA for a week or so.  They went back to playing crappy basketball against the Oregon schools this weekend.  Oregon State locked them down with their zone defense, and Oregon blew them off the floor two days later.  We already knew the Bruins played no defense, and now they can’t even throw the ball in the ocean when they face some junk defense.  They also have no depth, and are sinking like the Titanic at the most critical point in the season.  I’m pretty sure most of those problems have been cause by Steve Alford.

I cannot believe how horrendous the NHL All-Star weekend was.  The weekend started out somewhat interesting during the selecting of players in a pick-up style process.  We got to see Drew Doughty, and many other players actually show some personality, and even talk some trash on other players.  That was something the league needed.  Except once we got to the skills challenge on Saturday night, it was pathetic.  The fastest skater contest had no flare to it like it did years ago.  The breakaway challenge is stupid, and includes all the negative qualities of a slam dunk contest.  The All-Star game was even worse, with very little competitiveness, and was simply hard to watch.  I think Jeremy Roenick was drunk during the telecast.  Luc Robitaille probably watched the speed of that game and felt like he could make a comeback.  Also, the only thing more embarrassing than having Fall Out Boy perform, is having your favorite NHL player come out during the intermission to listen to them.  Drew Doughty did grab Jonathan Toews balls, but I think there’s been enough jokes about grabbing balls in this edition of MMC, so I’m just going to leave that one alone.

One interesting development that did come out of the All-Star weekend was the fact that the NHL announced it was going to have a World Cup of Hockey starting in 2016.  Ugh….another league trying to go to a World Cup format, and possibly ditch participation in the Olympics.  Baseball did it.  The NHL is doing it.  and the NBA wants to do it.  The reality of it is it’s stupid.  You can’t duplicate the World Cup of Soccer.  When it comes to hockey, the players love playing in the Winter Olympics, and it’s very important to them.  Creating a World Cup minimizes the significance of international play, and the only reason it’s being done is because the NHL wants to profit.  These leagues need to go to the IOC, and work out a revenue sharing plan to keep their players involved.  It’s good for the Olympics and it’s good for the global marketing of their leagues.  We don’t need some fake tournament crowning the “World Champion”.  The Olympics are what its all about for the international stage.

Andy Dalton is so bad in the post season that he even finds a way to lose in the Pro Bowl  The only thing worse than the Pro-Bowl was listening to ESPN justify its existence in the pregame and post game show.  Just kill it already!