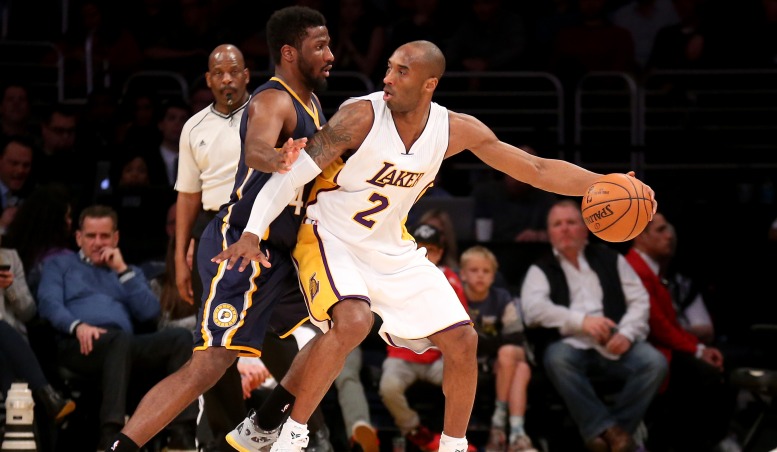 Welcome to 2015, where it’s time to face the cold hard reality.  Not just that the holidays are over, but that basketball in LA sucks.  Last night was a useless victory for the Lakers, against a Pacers team that somehow found a way to execute even more poorly at the end of a game than the Lakers.  LA will probably get blown off the floor tonight against Portland.  I love those of you that say Kobe needs to pass more.  Have you been watching this team?  It doesn’t even matter, they are terrible either way!  I say let him shoot 40 times a game.  That way we’ll at least be entertained.  I guess there were two entertaining parts to the Laker telecast last night.  The first was Kobe’s reaction after the Carlos Boozer fight with Roy Hibbert, then Jordan Hill claiming that he once dated Iggy Izalea…….

Then there’s those of you who might still believe the Clippers are providing us with good basketball in LA.  That’s only true when they play the NBA garbage like Philadelphia, New York, and Utah, whom they beat up on earlier in the week.  They need better defense.  They need better play from their superstars.  They need a small forward.  And they need a better bench.  Oh, but other than that they are just great.  Is this what they really paid Doc Rivers $7 million a year for?  For early playoff exits?  The only thing that can save this group is if Lebron James gets fed up and leaves Cleveland, again, to play with his friend Chris Paul and the Clippers.  I actually took two Clippers tickets to a broker to be sold the other day.  I gave them to the broker, came back two days later and asked him how much we got for them.  He said “How much?  We didn’t sell them, and now you’re stuck with four tickets!”

Then there’s UCLA basketball, which found a way to hit rock bottom again after this weekend.  When the Bruins hired Steve Alford, I thought they had hired Steve Lavin all over again.  I was wrong.  Even Steve Lavin never had his players quit on him like this.  The Bruins scored 39 points yesterday against Utah, which was the fewest amount of points the team has scored in a game since 1967.  UCLA has lost 5 in a row, including its first two conference games, and gone 4 straight games shooting no better than 32%.  This is for a team that has an offensive minded coach.  I’m beginning to think the Bruins won’t even make the NIT Tournament, let alone the NCAA tourney.  Historically bad times call for drastic measures, like firing Steve Alford.  Unfortunately, that probably won’t happen, because AD Dan Guerrero would likely lose his job as well if he had to replace another basketball coach.

The news wasn’t all bad for UCLA athletics this weekend, as the Bruin football team took down Kansas State in the Alamo Bowl.  I’ve gotta admit, I thought UCLA was going to take a beating after seeing how they finished the regular season.  However, Brett Hundley looked determined to finish his college career on a positive note, rushing for nearly 100 yards, and Paul Perkins ran wild as well.  Jim Mora’s brief handshake at the end of the game with Bill Snyder felt like Jim Harbaugh’s slap on the back of Jim Schwartz a few years ago, only this time it was warranted because Snyder’s players tried to take a cheap shot on Hundley late in the game.  This game was simply bittersweet. Great to see the Bruins win against the 11th ranked team in the country, but felt like they should have at least played Oregon for the Pac-12 championship, and not blown it against Utah.   Even with Hundley leaving, the Bruins can still be very good, but Mora needs to get his players to be mentally tougher if he’s going to get the program to the next level.

As for the college football playoff, what does the SEC have to say for itself now?  ESPN must have be losing its mind not being able to talk about SEC teams since ‘Bama got bounced by Ohio State. This is the worst thing to happen to Alabama since incest became a crime.  That’s gotta be tough for a conference full of schools with kids that shouldn’t even make the cut as college students.  Don’t worry Oregon fans!  The Tallahassee police department won’t file assault charges against you either, after what you did to Florida State last week.  I wonder what “discipline” the Oregon Athletic Department will hand out for their players making fun of Jameis Winston….

On to Wild Card Weekend of the NFL.  The Panthers are finally a .500 team!  I feel like the best play the Cardinals ran in the game was one that lost about 30 yards.  Hopefully those of you that played the “take a shot for every play the Cardinals lose yardage” drinking game, took an Uber home safely on Saturday.  The Panthers will be toast next weekend in Seattle.  Costly turnovers for Big Ben and the Steelers against the Ravens.  After all these years, Ben is still trying to force it in the hole.  I don’t think these Ravens can take this Patriot team with a healthy Gronkowski, and a better defense.  There are certain things in life that are guaranteed:  death, taxes, and Andy Dalton losing in the playoffs.  It’s pretty tough to win a game like that without two of your best receivers, but the Bengals haven’t won a playoff game since the Houston Oilers were around.  I don’t think Andrew Luck is quite ready to knock off Peyton and the Broncos…..yet.  It’s exciting that we get a Cowboys @ Packers matchup next weekend, but the referees were awful yesterday in the Lions game, and you’ve gotta think they got screwed.  Roger Goodell had better claim that he never saw the tape.  Looks like Jerry Jones’ check to the referees cleared just in time.

Has anybody told the Kings that it’s not December anymore?  That means they aren’t supposed to suck.  LA does nothing easily anymore.  They pulled off an amazing comeback against Nashville on Saturday, only to lose 7-6 in overtime.  I’m pretty sure there will be better defense played in the NHL All-Star game than what we saw in that game.  Why am I not surprised that we are halfway through the NHL season, and the Ducks are on top of the entire league?  Now if they actually raise the Stanley Cup this summer, then i’ll be surprised.

Finally, much like everyone, I am shocked and saddened by the death of ESPN anchor Stuart Scott.  As a former sports radio broadcaster, Scott was one announcer that I found inspirational while i was in the business, especially since he was really an innovator in the industry with the phrases he would drop during Sports Center.  Today, anytime I watch a highlight, I wanna yell “booya”, or say “cool as the other side of the pillow” because it adds flare.  Great job by ESPN with their tribute to him yesterday.