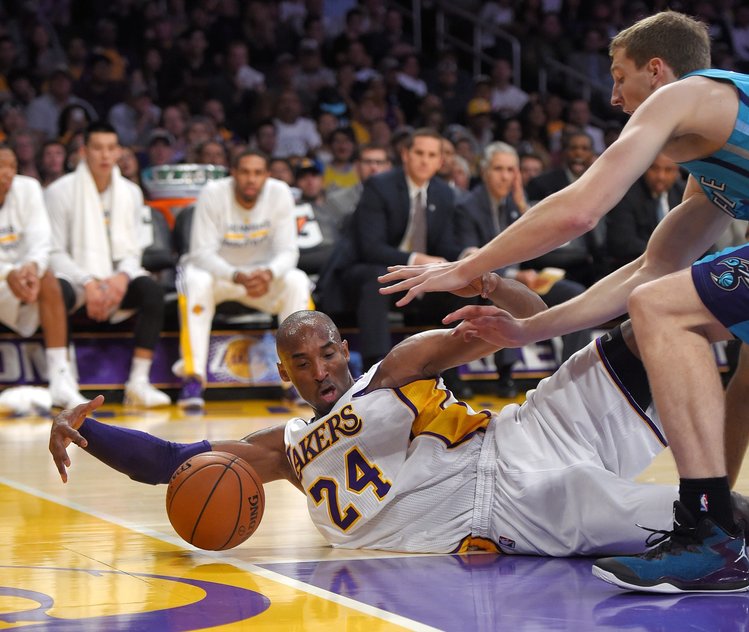 Congratulations to Charles Barkley!  Charles you can finally eat a meal, now that the Lakers won their first game of the season last night against Charlotte.  Good thing too, because if they didn’t win last night you might have died.  Not only did the Lakers win, but the fans got tacos too.  That may never happen again this season.  The more I watch this team, the more I wonder whether or not the front office actually had any intention of putting a competitive team together this season.  On the bright side, it is remarkable that in his 19th year in the league, Kobe entered yesterday’s game leading the league in scoring.  Even more impressive is the fact that he’s playing every game like his house is on fire.  Although this is entertaining, it’s also somewhat stupid.  The Lakers are wasting the remaining good basketball Kobe has left, and they are also running him into the ground with the amount of minutes he’s taking on.  If you’re going to spend $48 million on someone, you should probably take good care of the investment, which the Lakers aren’t.

What was Steve Nash thinking?  Nash decided to post a video on Instagram of himself hitting golf balls last week.  Once he saw the criticism he was receiving through social media, he immediately went into damage control and wrote an open letter to Laker fans.  In the letter, he claimed that swinging a golf club is a lot different than playing NBA basketball every night against great players. I’m no golf pro, but I’m pretty sure you need to have a healthy back to be able to swing a golf club, which makes Nash look really bad here.  He probably can’t remain healthy on a weekly basis in the NBA, but he looks like he came back to do nothing more than collect a paycheck, while starting his retirement early.  He’s also guilty of just plain stupidity.

Meanwhile, the Clippers are still an unimpressive 4-2 after beating Portland on Saturday.  Everyone seems to be under the impression that the Clipps were this young team on the rise, that was improving with every game they played.  However, that’s only because most of you are comparing them to the laughing stock across the hallway.  The reality of it is, other than Blake Griffin, the Clippers look like a good team that has reached their ceiling, and not a championship contender.  They got blown off the floor against the Warriors, and have struggled against some very mediocre teams.  Look it’s early, and we always tend to overanalyze what we see in the NBA. However, the Clippers have given us nothing to make us think things are any different from the last couple of seasons.

Speaking of the Clippers, Gillian Zucker was introduced last week as the new president of business operations.  Gillian proclaimed that “the Clippers are well on their way to becoming Los Angeles’ team.”  That’s cute.  She’s spent the last 9 years in auto racing, so she started watching the NBA last week.   Gillian obviously hasn’t walked into Staples Center and seen the 16 championship banners that belong to the LA Lakers.  You should probably take an NBA history lesson first Gillian.

To college football, where Bruins are exactly who I told you they were.  A good team, but not quite a great team.  For really just the 2nd time this season, UCLA looked like an elite team by taking down Washington on the road.  The hot again, cold again, Brett Hundley got hot again, throwing for 302 yards and 2 touchdowns, while running for two more.  If you didn’t expect these guys to be a national championship contender a few months ago, you might actually be impressed.  Dare I say it? UCLA is peaking at the right time.  They have two weeks to prepare for USC at home, then host Stanford.  Two very winnable games, while needing Arizona State to lose one of its last three, in order to play for the Pac-12 title.  Before it’s over, UCLA could still find themselves in a pretty good bowl game. 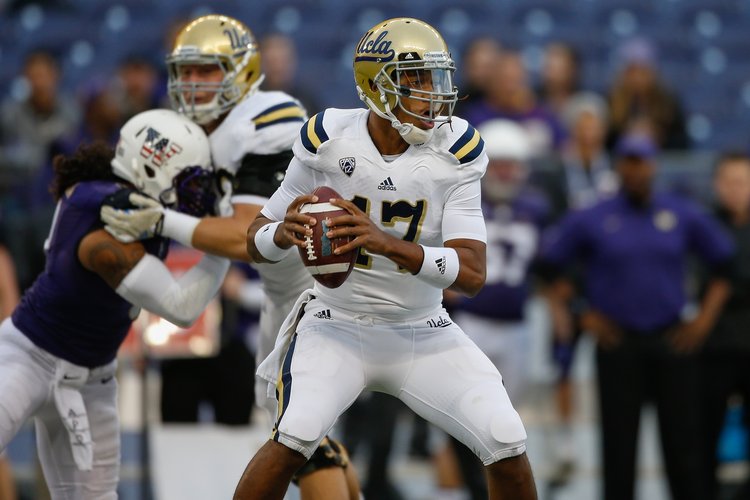 Elsewhere around college football, Notre Dame had its hopes and dreams for the playoffs shattered after losing to Arizona State.  Nobody beats Notre Dame like Notre Dame.  Everett Golson threw 4 interceptions, and lost a fumble, and the Irish were toast by the end of the 1st half.  Amazing how unprepared that team looked against an ASU team that everyone knew was going to blitz on nearly every play.  I suppose the Irish can still go to a pretty good bowl game, but you can kiss the playoffs goodbye.  Too bad because the Auburn, Michigan State, and Kansas State losses would have vaulted ND a long way up the rankings.  Great game between Alabama and LSU, and what a comeback by the Crimson Tide to win it.  That’s gotta be the best thing to happen in the state of Alabama since incest was downgraded to a misdemeanor.  Oh and this actually happened in that game……
There was also this bonehead play in the Utah vs Oregon game……..

To baseball, where the Dodgers must have more people in their baseball operations department than any franchise in the history of the league.  They hired Farhan Zaidi as their GM last week, who used to be Oakland’s assistant GM.  They also hired Josh Byrnes as Senior VP of Baseball Operations.  Weren’t both of these guys supposed to be GM candidates?  Wasn’t Andy Friedman supposed to be a GM candidate too?  And isn’t Ned Colletti still somewhat of a GM as well?  All of a sudden, the Dodger front office looks more crowded than their outfield.  Although I’m going to reserve judgement until I see what moves are actually made, the fact that all these guys seem like Moneyball jocks has me concerned.  The Dodgers don’t need to spend $300 million a year to win, but they also shouldn’t be operated like some small market team like Tampa or Kansas City.  Whatever happens with Hanley Ramirez in the next few weeks will be a big sign of what these guys plan to do.  I say give the man a 3 year $45 million deal, and buy some time to develop a replacement.

On to week 10 of the NFL, where someone must have told Andy Dalton that Thursday was a playoff game, because he played terrible, and the Bengals got pounded by the Browns.   Last night, Jay Cutler was about as accurate as Helen Keller playing darts, and Chicago was “emBEARassing” against the Packers.  Just when you think the Steelers are elite, they completely embarrass themselves by losing to an embarrassing Jets team.  I can just imagine how loud NFL gamblers screamed when they saw Jimmy Graham push off on the final play of regulation against the 49ers, which negated his hail mary touchdown.  Great acting job by the 49ers defensive back on that play.  Just as Dr. Jerry Jones told us, Tony Romo played, and the Cowboys dominated the Jaguars.  Things haven’t been this bad for the Dolphins since Snowflake was stolen and they had to hire Ace Ventura to find him.  The Cardinals may have lost Carson Palmer to an injury, but John Brown’s celebration was even better than the TD he scored….

To the ice, where the Kings pounded the Canucks on Saturday night, but have some issues to work out.  Drew Doughty and Dustin Brown make $7 million a year, and they have a total of 2 goals in 15 games this season.  Would they just let Slava Voynov play already!  Either charge the guy and let the legal process take its course, or let him play again.  The Kings will have their first showdown of the season with the Ducks on Wednesday night at the Honda Center.  Anaheim is rolling, and doing it with defense.  They had the best record in the league coming into Sunday, and they were tied with the Kings for having allowed the 2nd fewest amount of goals in the league.  After John Gibson’s injury, it looks like Frederick Anderson is firmly the teams #1 goalie as well.

And finally, another interesting episode of the Walking Dead last night on AMC.  Spoiler alert for those of you who have yet to see it.  Let’s recap quickly.  Abraham, Rosita, Glen, Maggie, Eugene, and Tara have taken a short bus, leaving the rest of the group behind to get to Washington, DC.  The bus mysteriously crashes, and the group must fend off Walkers.  Throughout the episode we see flashbacks of Abraham’s life as a father and husband.  The group gets to an abandoned bookstore for refuge.  Eugene is peeping and perving while Abraham and Rosita have sex.  When Tara catches him, he admits that he caused the bus crash, by putting crushed glass in the fuel line.  Tara promises to keep his secret.  The group finds a firetruck and heads out of town, but not before killing another herd of Walkers.  Finally, the group faces another herd on their drive and is forced to stop.  When the group argues what to do, Eugene admits that he isn’t a scientist, but was just using everyone to get to DC, where he believes their best chance of survival is.  He also believes he is smarter than everyone else.  Abraham proceeds to beat the crap out of Eugene.  The final flashback shows Abraham’s dead wife and son, and just before Abraham is about to kill himself, he saves Eugene from Walkers.  Eugene then convinces Abraham to help him get to DC.

Ok, this episode was much slower than the first 4 episodes of the season.  It was bound to happen.  However, we’re so used to complete chaos, and things falling apart around the group.  In this episode, we actually see the group getting closer, which is a nice contrast.  In the end, in a much more subtle way, Eugene is a dangerous character.  People have died trying to protect him, when he is offering nothing in return.  He’s a fraud.  There’s also a great deal of symbolism in this episode, like when Eugene is in the bookstore admitting his lie to Tara.  He’s actually in a row with a book called “We All Fall Down” by Nic Sheff.  The symbolism goes even further.  Maggie mentioned a riddle to Eugene, which involved Sampson telling a riddle, which was really a lie that caused a great deal of death.  Symbolically, Eugene is like Sampson, in that his lie, ultimately caused a lot of death.  These types of episodes really make you think about the plot, but they are still enjoyable, albeit a lot slower. 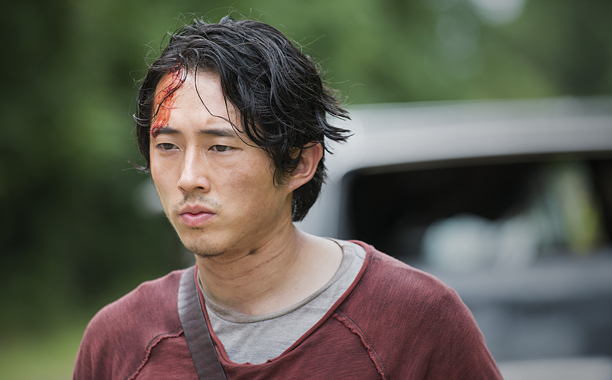