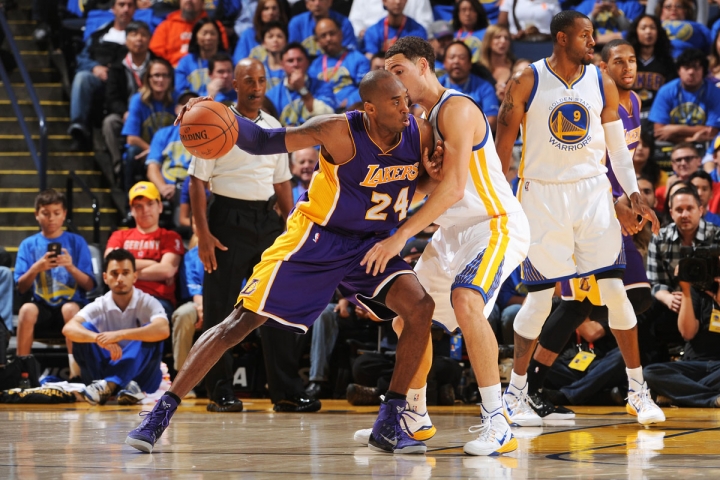 Yup…..the Lakers are a disaster.  The NBA clearly does not feel bad about the Chris Paul trade, because they just screwed them in the first week of the NBA season.  LA has played 4 games in 5 nights, and is 0-4, their worst start since your parents were born.  You think it’s bad now? Look at the schedule.  They might win 2 games in their first 10.  Their season is over before it even starts.  Kobe still looks like Kobe.  Jordan Hill and Ed Davis are serviceable, however, everyone else stinks.  Jeremy Lin is not a starting point guard in the NBA, and Carlos Boozer is totally past his prime.  The development of Julius Randle was going to be the only glimmer of hope this season, but now that he broke his leg, this season is pointless.  This has the makings of a very long and painful rebuild.

As for the Clippers, they are 2-1, but they’ve looked rather underwhelming in the first week.  They barely got by an Oklahoma City Thunder team that was missing its two best players.  Then they barely beat the Lakers, which would have been an embarrassing loss, then lost to Sacramento. The good news for the Clippers is that Blake Griffin looks like he improved his offensive game.  Dude can actually shoot a free throw, make some 3 pointers, and even be a go to guy late in the game.  The bad news is the team’s shooting, defense, and rebounding has been bad, which is never a recipe for success.  Wasn’t Doc Rivers supposed to be a defensive genius?  Sure seems like that genius actually came from Tom Thibodeau.  It’s early, but the Clippers have a lot to clean up if they are truly contenders.

The contracts extensions that are being handed out in the NBA are completely ridiculous.  Where was I when NBA GM’s were handing out money?  Nikola Vucevic has nobody on his team, and that makes him a $48 million player for the next four years.  Ricky Rubio couldn’t even shoot a basketball last year.  I’m sure he’s a great bull fighter in Spain, but for some reason he’s making $54 million for the next 4 years.  The Jazz were one of the worst teams in the NBA last season, but locked up Alec Burks, Gordon Hayward, and Derek Favors for $154 million over the next four years.  What the hell is going on here?  Do all NBA GM’s drink on the job?  It just proves that the real NBA stars are grossly underpaid, while most role players are badly overpaid.

Let’s go to college football, where our unimpressive theme continues with the UCLA Bruins.  UCLA was good, but not great in a win against Arizona on Saturday night at the Rose Bowl.  Ok, I’ll give the Bruins defense some credit here.  They held the Wildcats to a season low 272 yards, which would be extremely impressive if Arizona wasn’t as Jekyll and Hyde as the Bruins.  UCLA had 118 yards in penalties, and it felt like they should have put up about 40 points.  At times, the offense was about as ugly as the jerseys the Bruins were wearing.  They really need to get rid of these ridiculous recruiting gimmicks.  Their running game looks great sometimes with Paul Perkins and Brett Hundley, but their receivers just can’t seem to take the offense to the next level.  Neither can Hundley’s passing.  UCLA is still alive for the Pac-12 South title, but it’s still going to take some more losses from Arizona State and Utah, with the Bruins winning out.  A trip to the San Francisco Bowl (whatever the hell that is) seems much more plausible than another trip to the conference title game. 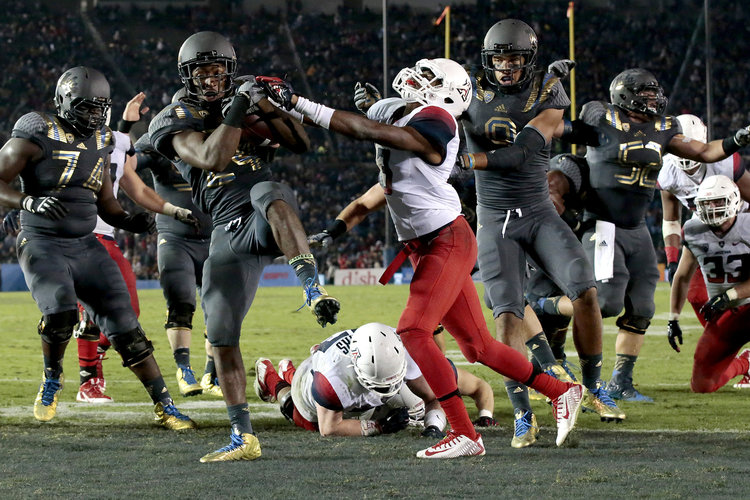 Meanwhile, the Trojans had no problem at Washington State, blowing them out 44-17.  Admit it, even you die hard Trojan fans fell asleep on your couches by halftime.  This wasn’t exactly like playing Arizona State or Utah, and having to worry about them actually mounting a comeback.  Especially not when Connor Halliday got his leg broken early in the game.  The Trojans won’t actually have to leave Southern California for the rest of the regular season, but they’ll have to avoid the trap game against Cal in two weeks before the big showdown against UCLA and Notre Dame.  SC will need to win it’s final two conference games, and hope ASU starts losing to have a chance at the Pac-12 South title.  That’s a tall order, but one that should make all the Trojan fans feel pretty good about Sark’s first season if it actually comes to fruition.

Notre Dame fans nearly had a heart attack over the past few days.  First, Florida State nearly lost to Louisville, then the Irish had a close call against Navy.  I appreciate the university’s strong affiliation with our armed forces, however, playing the Sea Men does nothing for the Irish other than make them look really bad if they lose.  This college football playoff committee has me skeptical that the Irish can actually make it in the playoff, even if they have only 1 loss.  They already slipped two spots in the AP, so I’d hate to see what the next playoff poll is going to look like.  These SEC teams are so overhyped it’s disgusting.  The difference between #1 Mississippi State and #2 Florida State is that Mississippi State has been struggling against garbage like Arkansas and Kentucky.  Meanwhile, FSU has “struggled” against solid teams like Notre Dame, Louisville, and Clemson.  The SEC love fest is killing me.

On to week 9 in the NFL, where the Jets should start taking auditions from their fans for their starting quarterback job after getting smoked by KC.  Their entire team would have been great……5 years ago.   Yesterday’s Manning vs Brady showdown felt a lot like those beat downs Tom Brady used to lay on the Colts when Peyton was with Indy.  Suddenly, the Pats are in the divers seat for home field.  The Chargers got blown off the field yesterday against Miami, and now they face the toughest part of their schedule.  Typical San Diego.  The 49ers and Seahawks are nothing like the teams they used to be, while the Cardinals have emerged as the class of the NFC. The Steelers are suddenly rolling, but I don’t trust anybody to emerge as an elite team in that division.  I’m not sure why the Redskins didn’t wait until after the bye to start RG III.  This is the kind of thing that could only happen to the Jets…..

To the NHL, where the Kings just can’t seem to win on the road.  After going 6-1 at home to start the season, LA’s road trip has been filled with injuries, penalties, suspensions, and a lack of scoring.  When you lose 4 in a row in the West, you can quickly find your way toward the bottom, and that’s what happening to the Kings.  Even though at times it seems like the Kings don’t give a crap about the regular season, it’s a dangerous way to play hockey, in a conference that’s so competitive.  Meanwhile, the Ducks aren’t slowing down, racing out to another 1st place start after last night’s win at Colorado.  Anaheim is actually doing it with defense for a change, as they have the 2nd best goals against average in the league.

Finally, an interesting episode of The Walking Dead last night.  Spoiler alert for those of you who haven’t seen it yet.  This episode was all about what happened to Beth.  She wakes up in a hospital in Atlanta, and a creepy cop tells her “you owe us”.  The hospital is made up of Dr. Steven Edwards, a creepy cop named Goreman, who keeps checking out Beth, as well as an orderly named Noah.  Then there’s the crazy cop Dawn, who runs the show, and seems to just slap Beth whenever she gets major mood swings.  After having her life saved, Beth is forced to work at the hospital for a little before being able to leave.  She has to hold down a patient while her arm is amputated with a sharp wire.

She later on poses the question to Dr. Edwards “why do you stay when you can leave whenever you want?”  He takes her downstairs to see a bunch of Walkers to show her the world is better in here than out there.  Later on Beth accidentally kills a patient by giving the wrong medication to a a patient.  We later find out Dr Edwards facilitated this because he knew the patient was a doctor, and he wanted to be the only doctor alive at the facility to remain valuable.  Beth and Noah try to escape the hospital, and when Beth gets the key she is cornered by Goreman, who tries to rape her.  Beth knocks him out with a bottle, and he is bitten by a patient that turned into a Walker.  As Beth an Noah try to escape, Beth is caught.  At the end of the episode, Carol is wheeled into the hospital on a stretcher.  Based on the end of the last episode, that probably means Noah is in the woods with Darryl.

This was a very different episode, but one that was still very interesting.  It’s become pretty hard to trust any new character in The Walking Dead, so I didn’t believe for a second that Beth was actually safe in the hospital.  It also became pretty obvious when they started dumping dead bodies down an elevator shaft.  I love how Beth totally went into “Uma Thurman Kill Bill Mode” when she was about to be raped by Goreman.  I’m thinking Carol infiltrated the hospital on purpose to save Beth.  This crazy cop Dawn has no idea who she is messing with, and it’s about to go down at the hospital.  Can’t wait to see where this goes next. 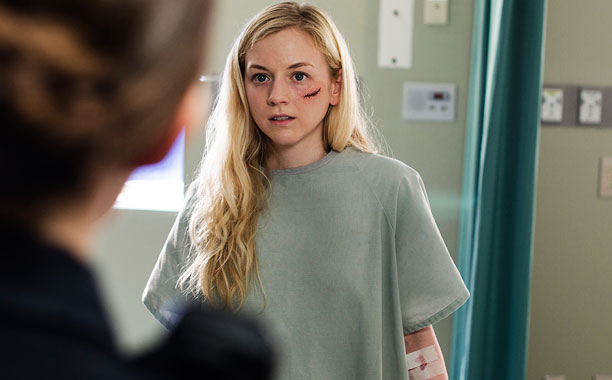