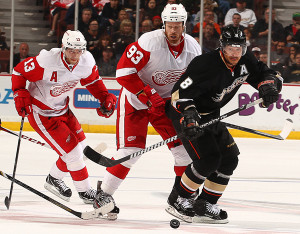 I can’t believe this dude is still playing.  I can still remember watching Selanne play against Gretzky and the Kings in 1992 at the Forum when he was a rookie.  19 years later he’s carrying the Ducks in the playoffs against the Red Wings, and he scored the game winner in game 1 vs Detroit to give the Ducks a 1-0 lead in their best of seven series.

Bruce Boudreau pushed the right button in game 1 by starting Jonas Hiller over Victor Fasth.  If there’s one advantage the Red Wings thought they had going into this series, it was having Jimmy Howard in goal.  But the Ducks put more pressure on Howard than Michigan alums put on their kids to attend their crummy school.

Corey Perry nearly “Clint Malarkchuk’d” Jimmy Howard in the 2nd period, with his drive to the net and shot to the head of the Red Wings goaltender.  I can’t remember an NHL season in recent memory with as many skate blades knocking guys in the face as this one.

This isn’t the same stacked Red Wings team that we’re used to seeing over the years.  They had to fight until the final day of the regular season to sneak into the playoffs, and their offense is carried by two players.  The Ducks may not have been able to score at even strength, but they played a great puck possession game, and their skilled players broke through on the power play.

If the Ducks, Kings, Sharks, and Blackhawks win their 1st round playoff series, The Ducks and Kings will meet in the 2nd round of the playoffs.  Can anyone imagine a better matchup in the Stanley Cup playoffs?  Those two teams would tear each other apart for seven games.  Then again, were talking about the Sharks coming up big in the playoffs.  Unlikely for a group that has perfected the art of choking around this time of year.

3 thoughts on “Finished By The Finnish Flash”