It wasn’t aways pretty, but they got it done.  The Bruins are headed back to the Sweet 16 for the first time since 2008.  UCLA took down Tulsa and Stephen F Austin this weekend to advance to the round of 16.  UCLA was very fortunate to avoid a team like VCU during the first weekend, but in any case, they took care of business.  The only impressive thing about this weekend was the fact that UCLA won with many of their players playing far below their potential, including Kyle Anderson on Friday and Zach Lavine, in both games.  Lavine has disappeared like that Malaysian airline, and Anderson played so bad on Friday, it looked like he was shaving points.  In any case, now comes the real challenge.  The Bruins will finally have to beat Florida to get to the Elite 8.  If they can do that on Thursday, then I i will gladly give UCLA Coach Steve Alford his due.  I know you probably think the Sweet 16 is great for Alford’s first year, but UCLA is all about championships.  Otherwise, Steve Lavin and Ben Howland would still be coaching the team.

How is your bracket looking?  I think I’m going to be picking the NIT bracket next year.  The amount of upsets we’ve seen so far shows you how screwed up college basketball is.  It doesn’t matter how talented your freshman are, because they don’t seem to understand how to win in the tourney like many of the mid-major teams with veteran talent do.  That’s a big reason why teams like Duke, Ohio State, Kansas, and Oklahoma State were eliminated.  Good thing Kentucky beat Wichita State yesterday.  Had they lost, Kentucky fans would have been more upset than when they found out they were dating their own cousins.

Now that is the Clayton Kershaw we all know!  The Dodgers awkwardly opened the 2014 regular season against the Diamondbacks over the weekend, and swept a pair of games, led by Kershaw. Kershaw dominated the D’Backs on Saturday, and the bullpen was brilliant after that in a 3-1 win.  Then, Hyun-Jin Ryu followed up with another great performance on Sunday, and Yasiel Puig finally came alive to lead the Dodgers to a 7-5 win.  There’s some questions about the bench, and parts of the lineup, but this team is going to be good.  With a $225 million payroll, I’m sure there are many teams that would love to have LA’s problems.  I still don’t understand why Major League Baseball thought it would be a good idea for these teams to open the season abroad.  Baseball has slipped to third among the four major sports, and is having its own issues keeping fans here.  I’m thinking it should probably focus on regaining its success in the U.S. before marketing abroad. 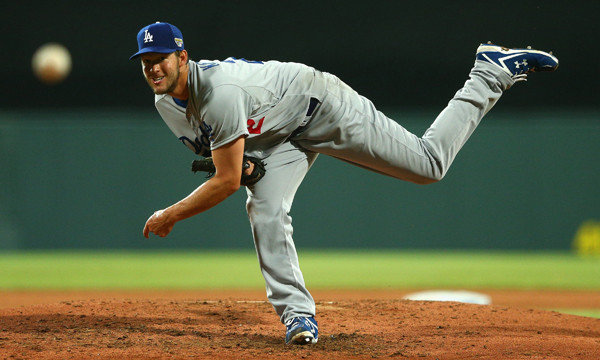 Back in the USA, the Angels are nearing their last few days of spring training, and Joe Blanton’s days could be numbered.  Blanton got shelled on Saturday against the Brewers, which could make him a strong candidate to be released, and would force the Halos to eat his $8.5 million salary.  With the emergence of Hector Santiago, Tyler Skaggs, and this week’s acquisition of Jose Alvarez, there’s simply no reason to keep this human launching pad on the roster.  As for ticket sales, the LA Times reported this week that season ticket sales are down by more than 20% in the last two years, and this years renewal rate was in the low 80% range.  So much for Arte Moreno’s theory that you have to have star power to sell tickets.  When will owners like Moreno and Jim Buss realize the big picture?  People don’t care how you win, as long as you do win.  You can be entertaining, but if you lose, people aren’t showing up.

To the NBA, where I’m pretty much obliged to mention the Lakers in this blog, even though they stink.  Actually, the Lakers probably don’t stink enough right now to get themselves a top 3 lottery pick.  LA found the need to defeat Orlando last night, in a game with critical lottery implications on the line.  Thank god the Lakers have a stiff like Mike D’Antoni as their coach, otherwise, they might be winning even more of these meaningless games and further damaging their lottery positioning.  Pau Gasol actually sat out the second half of last nights game, after he felt nauseous and dizzy, which caused him to spend the night in the hospital.  This proves what we’ve all suspected for quite some time, that Gasol just isn’t tough.  I mean, watching this entire Lakers season has made me nauseous and dizzy for months, and you don’t see me checking into a hospital!

As for the Clippers, they continue to build momentum towards the playoffs.  They’ve won 12 of their last 13 games, appear locked into 4th place in the Western Conference, but keep something in mind.  LA is now 6th in the league in defensive field goal percentage.  This is very important because 6 of the last 7 NBA champions have finished in the top 6 in defensive field goal percentage. (Are you listening Mike D’Antoni and Jim Buss??).  The Clipps half court offense also appears to be improving rapidly, with Blake Griffin’s game ascending to new levels.  San Antonio looks amazing, but don’t count the Clippers out yet as a team that could come out of the West.  That still might not give them the headlines the deserve.  They were barely noticeable in the Sunday morning edition of the LA Times.  LA is like a super nerdy girl in high school that shows up at your 5 year reunion smoking hot, but for some reason, still can’t get anybody to talk to her.

I don’t know about you, but I thought for sure my phone was broken on Saturday when I looked at the Kings box score.  It was telling me that Trevor Lewis, Mike Richards, and Dustin Brown all scored against the Panthers.  It feels like the odds of winning Warren Buffet’s $1 billion bracket challenge were better than that happening.  Brown and Richards have had a pretty terrible offensive season, but the Kings better hope they can get their games together for the playoffs, or else they might not last long.  When the Capitals came to town to play the Kings earlier this week I took a peek at Alex Ovechkin’s numbers, and he’s scored 45 goals and is a -31.  Holy crap! -31?? Do you know how terrible defensively you have to be to have a -31?  Congratulations to Jonathan Quick for passing Roggie Vachon for the most wins by a goalie in Kings history.  Even though Roggie didn’t have the benefit of shootouts, Quick is still on his way to being the best goalie in franchise history.   What a great save he made Saturday on Tom Fleischmann….

With just 12 games left to go in the regular season, the Ducks have lost their grip on the Pacific Division title.  Anaheim must now overtake the Sharks to reclaim the division title.  Make no mistake about it, the Ducks want to win the Pacific, and avoid the Kings in the first round of the playoffs.  Anaheim would much rather take on the likes of Phoenix, Minnesota, or Dallas,  in the 1st round of the playoffs, where they will not be faced with such a rugged style of play.  The good news for the Ducks is that 9 of their last 12 games will be against teams that are not currently in the playoffs.  Anaheim has cooled off quite a bit, playing .500 hockey over their last 10 games, but this last stretch gives them a chance to regain some momentum before Bruce Boudreau’s annual playoff collapse.

No Walking Dead recap this week folks, as I have yet to catch up on my DVR.  However, with the season finale coming up next week, I’ll have a lengthy recap and analysis coming soon!