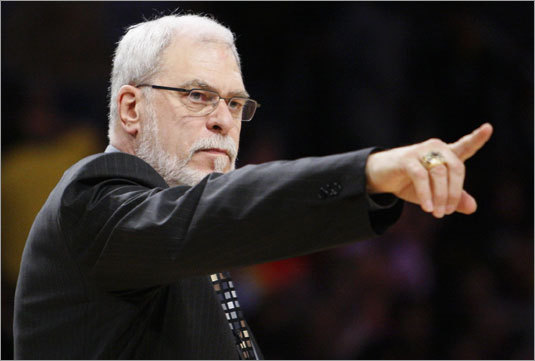 The clock is ticking Jimmy Buss!  That’s right buddy…..you’re running out of time to bring back your future brother-in-law, Phil Jackson, to the Laker organization.  The New York Knicks have offered Phil exactly what he’s looking for: a front office role, in which he has the final say in all basketball decisions.  Jackson says he will give the Knicks an answer in the next week.  It’s no surprise that Phil’s camp is leaking these rumors.  He’s trying to put pressure on Jim Buss to offer him a role with the Laker organization, which we all know is the job he really wants.  For those of you who have forgotten, Phil’s fiance, Jeanie Buss, is now co-owner of the Lakers.  If Jim let’s Phil get away, the fans will simply never forgive him, and the Laker franchise will likely slip into years of losing.  I realize that Phil has never had a front office role, however, I have a feeling he knows a thing or two about putting together championship teams, since he’s only won 11 of them.

As for what’s happening on the floor, the Lakers had a completely wild week.  Somehow, they managed to beat Portland and Oklahoma City, while getting humiliated by Clippers and Nuggets.  I’m sorry, but no NBA team should ever lose to another by 48 points, and especially not at home.  The fact that this happened to the Lakers, at home, and against the Clippers, should be completely unacceptable.  Before that game ended, the entire coaching staff should have been fired, the entire team should have been placed on waivers.  I’ve been a big advocate for the Lakers tanking, but I don’t want to see this franchise embarrassed.  Jodie Meeks obviously took my advice to a whole new level yesterday, as he decided to do his best Reggie Miller impression, with a career high 42 points.  Great professionalism by Meeks, but the same can’t be said for Kent Bazemore, who decided to bust out the airplane after making a big layup at the end of the game.  This dude does realize his team is 20 games under .500 right?

As for the Clippers, Charles Barkley believes that they are currently the best team in the West, followed by Oklahoma City.  That pretty much insures that neither one of those teams will be coming out of the West this year.  Funny, because when I woke up this morning, the standings told me that the San Antonio Spurs had the best record in the west, and they don’t even play their star players every night.  Don’t get me wrong, Blake Griffin and the Clippers are much improved, however, I don’t see them beating the Oklahoma City or San Antonio in a 7 game series.      They’ll likely have to go through both of them, in order to get to the NBA Finals.  Sorry Chuck, but your picks are “turrible”.

I had the privilege of going out to Arizona this past weekend, to check out some spring training games.  I’m usually not a big fan of watching pre-season sports, however, I would encourage all baseball fans to experience it.  It’s very fan friendly, the tickets are cheap, and you can get pretty close to the players and coaches, and I’m not talking about really good major leaguers here.  Going to Camelback Ranch was pretty exciting, and I got to see a very entertaining game between the Dodgers and Mariners on Saturday night.  Unfortunately for LA, Josh Beckett got pounded, and their pitching in spring training hasn’t been all that great, especially considering it’s supposed to be the team’s strength.  Even Clayton Kershaw has been underwhelming in three spring training starts.  On the bright side, I think Alex Guerrero is going to be a good major league hitter, and Matt Kemp says he’s getting closer to returning.  That means the Dodgers lineup is going to be explosive.

The Angels have to feel really good about what they are seeing so far from their new pitchers. I don’t like to make a big deal about spring training performances, however, Tyler Skaggs and Hector Santiago have looked like quality middle of the rotation pitchers, which the Halos desperately need.  Albert Pujols hasn’t shown too much power though, and he’s also a little cranky.  He was asked earlier in the week if he feels pressure to put up big numbers because of what his teammate, Mike Trout, is doing.  Pujols was so disgusted with the question, he responded by implying that Trout is not as proven of a commodity as he is, since he’s only been in the league for a couple of seasons.  I think the better question for Albert would have been if he feels pressure to put up “Pujols numbers” since he is making $240 million over the next decade.

On to college basketball, where March Madness has arrived.  The conference tournaments start next week, but UCLA managed to blow it again on Saturday, losing to lowly Washington State on the road.  UCLA is still the #2 seed heading into the Pac-12 tourney next week, but their inconsistency, lack of focus, and lack of defense makes me think they won’t be playing for very long.  This sounds like a team coached by Steve Alford.  That’s right…..they are coached by Steve Alford!

Let’s go to the ice, where it looks like the Olympic break did wonders for the LA Kings.  LA has won 7 in a row, and it feels like they’ve scored more goals in the last week, than they have all season.  Suddenly, Alec Martinez is scoring like Bobby Orr.  I also love the trade for Marion Gaborik, that they made at the deadline.  I realize that Gaborik is capable of getting injured when air hits him, however, he is one of the most skilled players in the league, and could provide a big boost to a team that sometimes struggles to score.  It’s a low risk, high reward move, and the team appears to be responding well to it.  The bad news for LA is that they will likely be playing without home ice advantage in any playoff series this year, so they’ll have to hope they can build the kind of momentum they did going into the playoffs in 2012.

Meanwhile, the Ducks made quite a few moves at the deadline, and are still playing well.  Even though Anaheim lost back-to-back shootouts, they dominated for long stretches against Montreal and Pittsburgh.  The bad news is that the Blues have passed them in the standings for the top seed in the West.  Coach Bruce Boudreau doesn’t seem too worried, which is good, because he probably forgot that his teams have sucked in the playoffs for years.  I was a little surprised that Dustin Penner was traded, because he usually brings it during playoff time, but Anaheim felt like his play was deteriorating after a strong start.  It was quite fitting that Penner was traded to Washington on National Pancake day!

Finally, the NFL off-season moves have begun.  In a surprising move, the Saints cut running back Darren Sproles, while the New York Jets have released defensive back Antonio Cromartie, which saved them $9 million.  Cromartie is notorious for having fathered 10 children, with 8 women, in 6 different states.  After being released by the Jets, his text inbox looked something like this….. 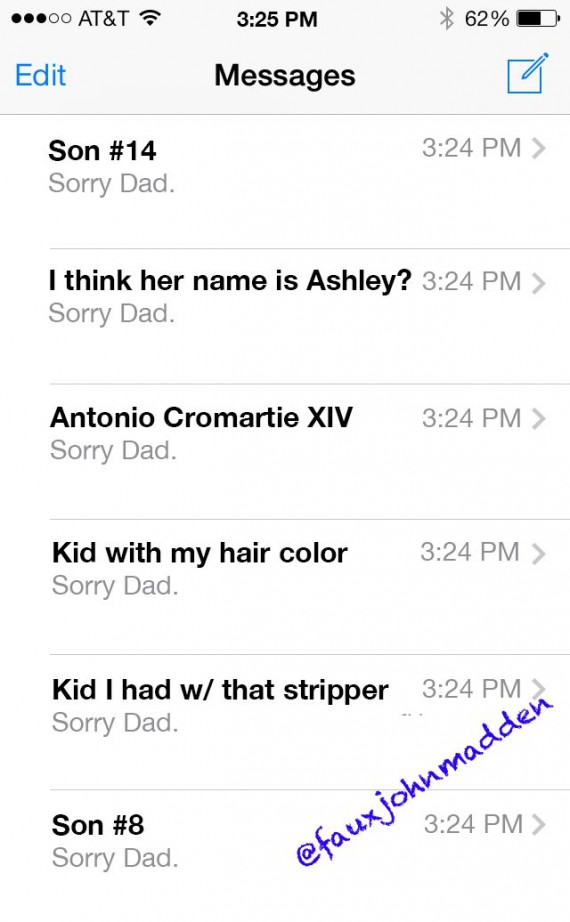