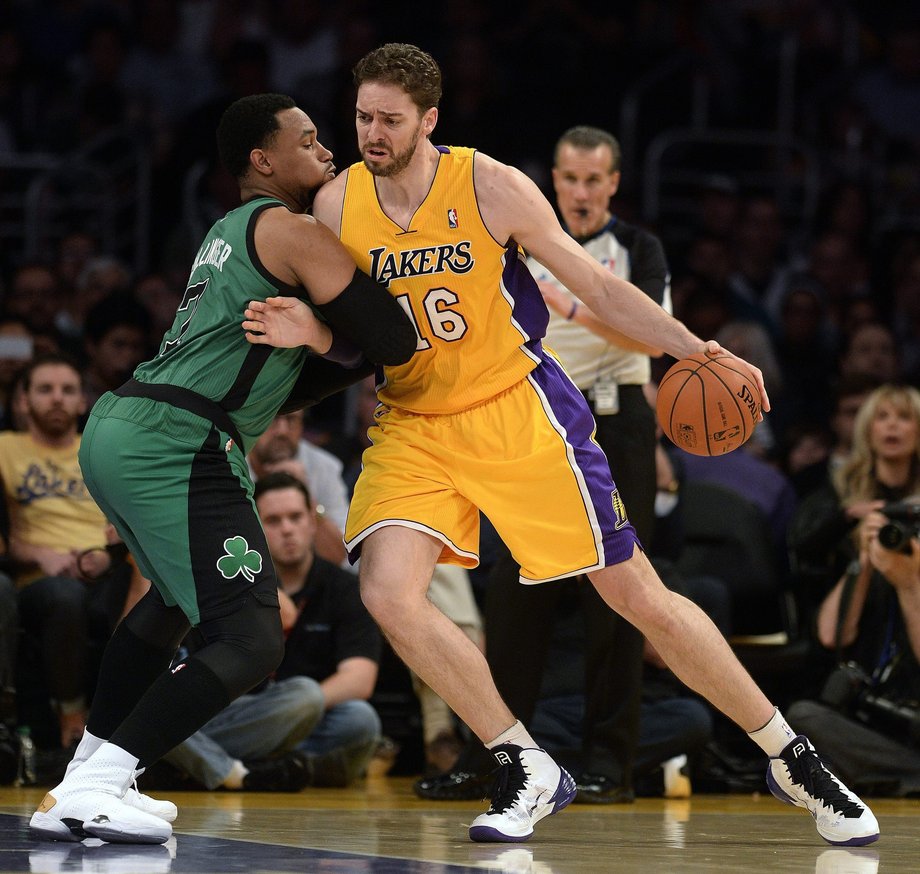 I’m really confused.  The NBA trade deadline was on Thursday afternoon, but somehow, Pau Gasol, Jordan Hill, and Chris Kaman all appeared to be playing basketball for the Lakers on Friday night.  That’s impossible though, isn’t it?  I mean, why would the Lakers hang on to these three guys when they are trying to lose games, collect some assets, and cut salary to get below the luxury tax?  Then I remembered that the Lakers are now run by Jim Buss, so these moronic moves, or lack thereof make total sense.  Mitch Kupchak spoke with the media right after the deadline, and he said that the team had an opportunity to unload players for just to cut salary, but the team declined because “there were no basketball components and that’s unacceptable within this organization.”

Gee whiz Mitch…….that sounds great and all, but last year, when you had a championship roster and your boss forced you to hire Mike D’Antoni instead of Phil Jackson, there sure didn’t seem like there were any “basketball components” associated with that move.  The Lakers held on to Gasol way too long, and now, he’s going to help them win games and hurt their draft status, while also screwing them this summer by leaving to take a bigger payday elsewhere.  It’s really beginning to look like next year will be just as rough as this year for LA, because Kupchak added that the team “may take more than one year to build”.  Laker fans are smart.  Many even smarter than Jim Buss.       A rebuild is perfectly acceptable at this point to fans, but it’s pretty hard to do anything when your owners are still trying to figure out their own identity.  That is what’s unacceptable.

Meanwhile, the Clippers stole a big win on the road against Oklahoma City yesterday.  The Clipps played well down the stretch, but they took advantage of the fact that Russell Westbrook is still trying to find his game after coming back from his knee injury.  The Clippers nearly made a poor decision at the deadline, by trying to trade for Knicks shooting guard Iman Shumpert.  Although Shumpert would have moved Jamal Crawford back to bench, he can’t shoot the ball to save his life  this season, and acquiring him would have opened up another hole by trading Darren Collison.  This year’s trade deadline was about as exciting as watching paint dry, as nobody wanted to give up 1st round picks in this years draft.  So the Clipps were smart to sign Glen “Big Baby” Davis to beef up their front court.  I wonder if they’ll be interested in Metta World Peace.  He’s a former Laker, so it makes sense the Clippers would want him for that reason alone.

What a complete disgrace the US Men’s hockey team was in Socchi.  Jonathan Quick probably bought one of those “I flew half way around the world for this shit” T-Shirts, in the airport, since he got even worse offensive support then he gets from the Kings.  They didn’t have the offensive fire power to beat Canada, but the showing against Finland in the bronze medal game was outrageous.  Patrick Kane and Zach Parise should have their US citizenships revoked after just quitting half way through that game.  The entire team played like their girlfriend just broke up with them.  So much for pride.  Dan Bylsma benched Dustin Brown in the last game because he wanted to play the guys he thought could score.  I guess it didn’t work because the US went the last 119 minutes without a goal.  Thank you to NBC for putting on a soccer game right after, so we could see more scoring.

As for the rest of the Olympics, can you imagine what the next 4 years are going to be like?  We’re going to have to hear from the Canadians how they just own us in hockey, after taking the men’s and women’s gold medals.  There could not have been a more devastating way for the US women to lose that final game.  Honestly, if it wasn’t for some of the newer and more obscure sports, Team USA would be a complete failure in these Olympics.  Our speedskaters flopped harder than Anchorman 2, and our biggest stars, like Bode Miller and Shaun White, didn’t bring home much hardware.  The bottom line is that the US earned 10 fewer medals than in 2010, after sending a record number of Olympians to the games.  Amazing the US is now being outclassed by a number of socialist countries like Norway, Denmark, and the Netherlands, both in athletic competitions, and in education!  So much for all of our financial backing.

It’s the early part of the baseball season, and that means once again, Dodgers pitcher Zack Greinke is saying or doing something stupid.  Greinke was asked about his thoughts on starting the season in Australia against the D’Backs, and he’s not very happy about making the trip. “I would say there is absolutely zero excitement for it.  I can’t think of one reason to be excited for it.”  Naturally, the Australian organizers of this event were not happy about the comments, and wanted an explanation from the Dodgers.  It’s understandable that Greinke may not be thrilled about disrupting his routine with such a long trip abroad, but that doesn’t mean he should express that moronic comment.  Major League Baseball is trying to grow the game abroad, and Greinke doesn’t get it.  It’s safe to say that the Australians will not be throwing another “shrimp on the barbee” for Zack during his trip.

The Angels and Mike Trout look like they are gaining momentum toward an extension, according to Jeff Passan of Yahoo Sports.  According to Passan, the deal could be around 6 years and $150 million.  Trout is eligible for arbitration next season, and is 4 seasons away from free agency.  So essentially, the Angels would be paying Trout an extra $10-$15 million per year, to lock him up for an extra two seasons.  Although an 8 year deal would be more ideal for the Halos, this would still be a pretty good deal for both sides.  This would definitely make Angel fans feel a little bit better about what’s going on in the organization these days.  Well….at least until the season starts.

Disappointing loss for UCLA yesterday.  These guys just continue to disappoint with a chance to catch Arizona for first place in the Pac 12.  It’s the third time this year that UCLA has won the opener of a weekend set, and then lost the 2nd game.  It’s two steps forward and one steps back for this group, and that kind of play won’t keep them around long come March Madness.

No Walking Dead review this week, so I’ll be catching up on DVR tonight!