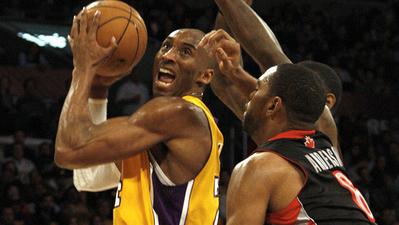 That didn’t exactly go as planned.  Kobe Bryant finally made his return to the lineup last night, after  recovering from a torn achilles tendon.  The return didn’t go as planned.  Kobe looked rustier than an old nail in my garage, and the Lakers got beat by the shorthanded Raptors on their home floor.  Yes, I realize it’s only his first game back, so I won’t make too big of a deal out of his 25% shooting and 8 turnovers.  However, where was the energy level from his teammates?  Why does it seem like superstars can’t play effectively in Mike D’Antoni’s dumb ass system?  If I didn’t know better, after watching Kobe’s Facebook video announcing his return, I would have thought Jesus Christ was going to be making his return to the Lakers.  Too bad, because I hear Jesus has some great handles, and the Lakers could really use a point guard right about now.

Then there’s the Clippers, who just make you wonder.  You wonder, why haven’t they become better defensively under Doc Rivers?  You wonder, why  Blake Griffin hasn’t come the next Karl Malone?  You wonder, why their bench is more inconsistent than Katy Perry’s hair color?  The Clipps have lost 3 of their last 4, and Rivers called out the team for pouting when things weren’t going their way the other night in Cleveland.  It’s hard to watch this team and think they are any better than last year’s team, which has to make Donald Sterling’s head explode.  It’s early, but a team performing poorly on the road, atrociously on defensive, and inconsistently off the bench does not represent an elite team.

On to college football, where both USC and UCLA made some serious headlines on the coaching front this past week.  The Trojans hired Washington coach Steve Sarkisian to be their new head, which has most Trojans fans ready to jump off the Santa Monica pier.  Let’s be honest, this was the best coach USC could find.  Every Trojan fan fantasized about unrealistic names like Nick Saban, Jon Gruden, and Mack Brown.  Although USC can be criticized for obsessively trying to recreate the Pete Caroll era, Sark knows how to recruit in the SoCal, and he’ll have far better resources at his disposal with the Trojans than he did at UW.  It will likely be a tough next year for SC with many of their upperclassmen leaving, but with the scholarship ban lifted the following year, the Trojans may not be down for too long.

As for the Bruin football program, they can breathe a sigh of relief knowing that Jim Mora Jr. agreed to an extension, and will not be leaving for the vacated Washington job.  Had Mora left, it likely would have meant Brett Hundley would have bolted for the NFL, and the UCLA football team would have instantly been bombed back to the stone age next season.  Mora’s new contract was announced, along with the opening of a new football facility on campus.  I still don’t understand why, after all these years, the Bruins haven’t figured out a way to put a football stadium on campus, or at least in Westwood?  It’s no wonder all of the previous coaches have complained about this, as it’s definitely prevented the Bruins from building a consistent winning program.

Speaking of UCLA, their basketball team is exactly who we thought they were!  They actually played real competition on Saturday morning, at Missouri, and they lost 80-71.  It’s hilarious how many UCLA basketball fans are in complete denial that the season has even started, because they are so disgusted with the state of the program.  It’s obvious what most Bruin fans were thinking this week:  Yes!  Mora is staying…..crap….so is Steve Alford.

I don’t know how many times I have to yell about it here on Jock Talk LA, but I’m going to say it one more time, so hopefully Dodgers GM Ned Colletti can hear me:  DO NOT TRADE MATT KEMP, OR ANY OF YOUR 4 OUTFIELDERS!  Kemp doesn’t want to be traded, and his agent, Dave Stewart, says that he is very nervous something could happen this week at the Winter Meetings.  On one hand, Colletti told the LA Times that he can’t just give up an outfielder because the free agent market in the coming years is weak.  However, he also said, he wouldn’t mind giving up an outfielder, if it means strengthening the farm system.  So what’s it going to be Ned?  Why give up any of these outfielders when you have to pay a significant portion of their salary anyway, and you’re getting .50 cents on the dollar back?  Bringing back Brian Wilson was a good move, but LA needs to keep the team together and give them a chance to make it to the World Series. They nearly did last year, with an unhealthy team.

I still can’t seem to figure out how the Angels are going to improve their team.  They don’t have the money to go get any real pitching, and they don’t want to give up Trumbo, Kendrick, or Aybar anymore.  So where does that leave them?  With the same damn team as last year.  At least they weren’t dumb enough to spend $240 million for the next 10 years on Robinson Cano like the Mariners.  They were dumb enough to do that two years ago with Albert Pujols.

Let’s go to the ice.  Most of the Kings fans probably don’t remember this, or just choose to block it out, but for years the Kings had been a team with terrible goaltending.  I was absolutely amazed to see the job rookie goaltender Martin Jones did against the Ducks, followed by a shutout against the Islanders.  It feels like just yesterday, the Kings were saddled with the likes of Dan Cloutier and Roman Cechmanek, who couldn’t even stop a beach ball from getting by them.  Whenever Jonathan Quick gets healthy, the Kings should now feel comfortable giving him regular rest, knowing that there are two capable goaltenders behind him.

Week 14 of the NFL Season may have been a death blow to the New England Patriots.  The Pats fear that Rob Gronkowski may be lost with a torn ACL, which probably just handed the Broncos a bye all the way to the Super Bowl.  Seeing so many of this week’s games played in the snow was pretty cool, but I still think a cold weather Super Bowl is a terrible idea.  Part of the novelty of playing in the Super Bowl, and even for fans going, is to go to a warm weather city.  Apologies to all those people that live in New York, Philly, and all those other cold ass cities.  You just shouldn’t be hosting Super Bowls, unless your stadium has a roof.

Lastly, the USA really got screwed when the World Cup group’s were announced this week.  Ghana, Portugal, and Germany all in our group?  The oddsmakers say the US has just a 39% chance of advancing out of pool play.  So much for my interest in soccer every 4 years.  Remember, we lost to Ghana in the last World Cup, and now they are in our group in 2014.  I feel really bad for this US soccer fan, who nearly lost his mind after the last World Cup…..