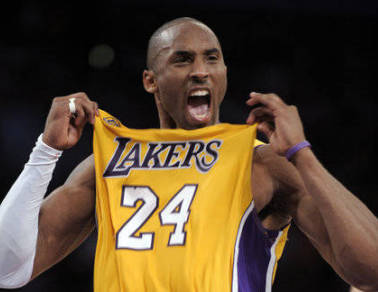 I’m all for loyalty in sports, but the Lakers made a very poor choice earlier this week.  They gave Kobe Bryant, 35 years old and coming off surgery to repair a torn achilles tendon, a 2 year contract extension for $48.5 million.  Kobe will earn $23.5 million next year, and $25 million the season after that.  That’s roughly one-third of the Lakers entire salary cap number, and definitely leaves the Lakers with limited flexibility for the remainder of the Kobe era.

Look, I get it.  Kobe is one of the greatest players in NBA history, and is probably the greatest Laker of all-time.  He’s also worth a lot more to the Lakers brand, and the value of the franchise, than the $48.5 million he’ll be getting paid over the next two years.  I even get that Kobe is taking a pay cut from the $30 million he made last season, and that can’t be easy to deal with when you are married to the demanding Vanessa.  Still, the Lakers usually make decisions based on winning, not based on business, and I’m not so sure winning had anything to do with this.  Kobe and the Lakers both know better than this.

First, Kobe has yet to play a game since tearing his achilles tendon last spring.  He may return next week, but who knows what level he will be playing at when he returns. Will he be the player that averaged 27 point per game last season?  Or will he be a shell of The Black Mamba?  If he can’t be The Black Mamba as we know him, then where does that leave the Lakers and their $48.5 million dollar investment?  And what other free agents would want to play with Kobe when he is no longer the player we’ve known him as?

Even if Kobe does return to form, the Lakers can now only afford 1 more max salary player.  Try as they might, that player won’t be Lebron James.  So let’s say they are able to sign the next best player on the market next summer, which is Carmelo Anthony.  Do we really think that a core of Carmelo, Kobe, and a bunch of role players will contend for an NBA championship?  Probably not.  The Lakers probably won’t even be able to re-sign Pau Gasol anymore, after giving Kobe this huge deal.  Pau will probably command at least $10 million per year, which will make the Lakers hard pressed to do so if they pair Carmelo with Kobe.  Don’t forget the Lakers will probably have to pay Steve Nash at least $3 million if they waive him.

The Lakers could have really pulled a fast one on the NBA here.  Kobe could have taken a two year deal for $20 million, and they would have had chance to pair Kobe with ‘Melo and Lebron, or ‘Melo, Rajon Rondo, and Kevin Love.  Even if Kobe had taken between $10-15 million a year, LA would have had the ability re-load with a powerhouse team very quickly.  Now, their best chance to acquire more talent is to trade for some of these younger studs who will be free agents in 2015.  The problem is, they lack the assets to do so.  Sure they have a roster full of expiring contracts, but they don’t have many draft picks, since they sent out a few of those for Steve Nash, who is older than the bible.

The decision to do this seems so dumb, you almost have to wonder if the Lakers were given some kind of indication that they weren’t going to get Lebron or Carmelo this summer.  Knowing Jim Buss, he probably realized that the only way he was going to get those guys to sign in LA, was if Phil Jackson was helping him recruit, and he’d probably not want to recruit anybody at all than work with his soon to be brother-in-law.

When you listen to Mitch Kupchak and Jim Buss talk about this decision, they mention how much Kobe has meant to this franchise, and how great it is having him play 20 years with the Lakers.  However, there was no mention of winning championships from either of them.  Maybe they realize  that it probably won’t happen in the next two years.  Kobe was never going to leave the Lakers, and I’m sure he believes that with just one more max player, they can win another championship.  It’s a great attitude to have from your franchise player, but that doesn’t make it realistic.  The Lakers have signed up for two more years of mediocrity.