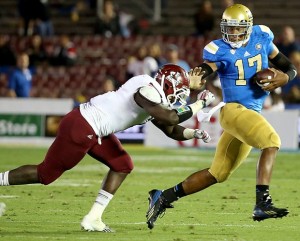 What a boring weekend of college football it was!  At the Rose Bowl, UCLA hammered New Mexico State 59-13,  The Bruins looked somewhat disinterested at times, and even the great Brett Hundley thew two interceptions.  Even so, the Bruins realized they were playing New Mexico State, and piled up 692 yards of total offense, including 164 rushing yards from Jordan James.  James also added 2 touchdowns, and the Bruins defense looked strong.  Great tribute to Nick Pasquale too, when they ran 11 men out on the field, then sent one off to run a play with just 10 players.    The Bruins will return to playing real people in about 10 days when they begin Pac-12 play against Utah.

Speaking of being uninterested, the Trojans looked even more bored against Utah State at the Coliseum.  USC escaped with a 17-14 win, and Cody Kessler looked more like the dude who couldn’t complete a pass in the first two weeks of the season.  The fans looked just as bored all afternoon, as the streets around the Coliseum weren’t nearly as crowded as usual.  The chemistry isn’t there, and even Marqise Lee couldn’t seem to get it going.  The Trojans are an ugly 3-1, but things are going to get tougher with a showdown against Arizona State next week.

Moving on to baseball, where the Dodgers are on their way to the playoffs for the first time in 4 years.   I loved the clinching celebration by jumping in the pool in left field.  The D’Bags asked the Dodgers not to celebrate on the field, and the Dodgers did not celebrate on the field.  If they have a problem with how LA celebrated, then maybe they should have done a better job in not allowing LA to beat the crap out of them over the last 3 months.  Oh yea, screw you John McCain!  Don’t you have better things to do than bitch about the Dodgers celebrating in the pool?  How about you focus on things like lowering our taxes and cleaning up the economy, which is in the crapper?

As for what’s happening on the field, the Boys in Blue took two of three against the Padres over the weekend, but they still don’t seem to be pushing too hard for home field advantage.  It’s completely understandable to try to get some guys a little rest down the stretch, but some of the games we’re seeing are practically spring training lineups Don Mattingly is putting on the field.  This may very well cost the Dodgers a shot at the World Series, especially if they have to play a game 5 or game 7 in a place like Atlanta or St. Louis.

A few quick thoughts on week 3 of the NFL.  The Chargers simply make their fans want to puke.  They come off a big win on the road against Philly, and they can’t even beat lowly Tennessee.  What the hell happened to San Francisco against Indy?  That was a beat down.  The Saints are pretty damn good, but they’ll need home field in the playoffs to have a chance against Seattle.

NBA training camp opens up in 5 days for the Lakers.  The LA Times felt the need to re-hash the hiring of Mike D’Antoni over Phil Jackson by writing a few excerpts from Jeanie Buss’ new book.  Jeanie described the entire saga, as “betrayal”.  After reading this, the first thing I thought was how unbelievably foolish Jim Buss is.  He actually had to ask Jeanie for Phil’s cell phone number, and had apparently never been to Phil and Jeanie’s house.  It just goes to show you how strained the relationship is between Phil, Jim, and Jeanie, and this is still a major question moving forward for the Laker franchise.

The Emmy’s were BORING……

And finally, Breaking Bad slowed things down a little in the next to last episode of the series.  I’m surprised this episode was so slow considering it was 75 minutes.  Once again, spoiler alert for those of you who have not seen it yet.  To quickly recap:  Walt checks out the chaos around him by going all the way to New Hampshire in an isolated cabin.  He has no phone, internet, or cable television.  By episodes end, he is motivated to go back home and help his family by getting them money, and killing Jack and his crew.  Jesse tries to escape from Jack’s crew, however, he is caught, and then punished by being forced to watch the crew drive to Andrea’s house, where they shoot and kill her.  Meanwhile, Skyler is under pressure from the feds to give some information on Walt’s whereabouts, but she is no help.  If she doesn’t give them any info, she could be in serious legal trouble.  Also, Walt tries to make contact with his son, but junior gets angry at him for the death of his Uncle Hank, and hangs up on him.

Creator Vince Gilligan has left us with no clues, as to how this will end.  One thing is becoming apparent:  Jack’s crew appears far more immoral than Walt, Skyler, and Jesse.  In the final episode, I have a feeling that in order to take Jack down, Walt and Jesse will end up joining forces one last time.  Still, it’s hard to envision which way the scales of justice will tip.