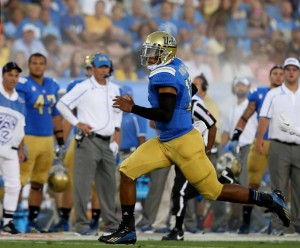 College football season is here and both So Cal squads found the win column in week 1.  However,   the Trojans and Bruins each appear to be trending in completely opposite directions.  UCLA obliterated Nevada 58-20 at the Rose Bowl, while the 90 degree heat simultaneously obliterated the fans that were willing to show up in Pasadena.  I’m not sure what’s more amazing: Brett Hundley’s 334 all purpose yards and 4 touchdowns? Or the fact that Jim Mora Jr. was wearing pants and a long sleeve shirt under his polo for 5 hours in the heat?  In any case, UCLA looks like they have an exciting football team for the first time in many years.

Then there’s the Trojans, who had an unimpressive 30-13 win over Hawaii in Honolulu.  Although the USC defense looked strong, the quarterback situation remains an issue for this team.  In addition to the fact that Lane Kiffin foolishly won’t commit to one starting quarterback, he constantly micromanages his signal callers, which inhibits their ability to improve.  Southern Cal had more talent at every position than Hawaii.  Instead of unleashing that talent and seeing what it can do, Kiffin wouldn’t let his quarterbacks do any more than act as game managers.  Kiffin also micromanaged Matt Barkley last season, causing him to lose confidence and ultimately, sink like the Titanic in the NFL Draft.

When it comes to So Cal college football, it appears for now, up is down and down is up.  Jim Mora Jr. looks like the new Pete Caroll.  Lane Kiffin looks like the new Ric Neusheisel.  UCLA has a great quarterback, while USC has two crappy ones.  Before you know it, UCLA will suddenly start having better looking girls on campus than USC.  Ok….maybe not.

As for the rest of the college football weekend, I was pleasantly surprised to see my Fighting Irish of Notre Dame take care of Temple 28-6.  I think most of my fellow Golden Domers were so shocked by “Turnover Tommy” Rees’ two touchdown passes in the first quarter, we felt it was practically a slap in the face to Notre Dame tradition.  Oh, and how could I forget to mention Texas A&M quarterback Johnny Manziel, who couldn’t be any more of a douchebag for taunting a player and pretending to sign an autograph after scoring a touchdown on Saturday.  This guy is becoming more unlikeable by the minute. The NCAA knows damn well he accepted money for signing autographs, but they know they have a star they can make money off of, so why suspend him?

On to baseball, where the Dodgers continue to roll.  The Boys in Blue swept the Padres over the weekend, and they’ve now opened up an 11.5 game lead over Arizona in the NL West with just 26 games left to play.  LA can probably look to start getting some of their top players some rest, even though they are only two games back  of Atlanta for the best record in the NL.  It sure would be nice to have a healthy Matt Kemp back for October, but you’d have an easier time trying to find Carmen San Diego right now than finding Kemp’s swing.  He’s been dreadful in his minor league rehab assignment.  Good thing Yasiel Puig showed up….

Despite Puig’s erratic behavior, there’s no doubt he can be a star.  The Dodgers look brilliant now for locking him up to a 7 year $42 million contract last winter, which is a bargain.  Speaking of being worth every penny, Zach Greinke has been a fantastic #2 starter.  After improving to 14-3 with yesterday’s win, Greinke has won 6 straight starts and looks like he’ll make a formidable duo with Clayton Kershaw come October.  Adding veteran infielder Michael Young over the weekend was another great, low risk move for the club too.  Closer Kenley Jensen has been just filthy, as he has converted 17 straight saves, and looks like a completely different pitcher than we saw earlier in the year.

As for the Angels, they’ve won a meaningless 8 of their last 9 games after sweeping the Brewers over the weekend.  As they did last year, they start playing real baseball when their season is already over.  Speculation is already running rampant about what Arte Moreno will do with Mike Scioscia and Jerry Dipoto.  Even though Scioscia deserves to keep his job more than Dipoto, hiring a general manager who can’t hire his own skipper isn’t very ideal.  In fact, when Moreno hired Dipoto two years ago, he was very interested in Rays GM Andy Friedman, but Friedman turned him down.  Moreno needs a general manager who can rebuild his farm system, and turn his current team into a contender by adding quality pitching at an affordable price.  Sounds like he’ll have to hire a new gm with the authority to hire his own manager to make this happen.

Moving on to the Lamar Odom saga, now that he’s has been found, and isn’t actually dead, everyone can resume the jokes.  It’s obvious that LO is on crack because he hasn’t signed with the Lakers, who are the only team that was actually offering him a contract.  Well, they “were” the only team offering him a contract, but after he was arrested for suspicion of DUI last week, that opportunity is gone.   Lamar is a good dude, but he needs to get his life together.  Last week, reports were that he was missing for 3 days, but they were clearly mistaken.  He’s been missing for over 3 years.

This Time Warner Cable vs CBS cable dispute is ridiculous.  I can’t believe they haven’t come to a resolution yet.  You Time Warner Cable subscribers realize that you don’t have CBS, Showtime, and KCAL right now is because TWC doesn’t want to charge you $1 more per month right?  For a company that has been notorious for price gouging its customers, I think they can drop the “concerned for their customers” act and gladly add the $1 to everyone’s bill.  TWC escalated this dispute when they blocked Showtime from its subscribers when the dispute started, and they stand to lose a ton of customers if they don’t figure this out fast.

I realize that I’m late to the party on this whole discussion about last week’s VMA’s, but I wasn’t nearly as horrified with Miley Cyrus as others were.  Her twerking display on stage was just another example of an artist trying to create an identify and sell a brand.  We’ve seen far more offensive displays on stage than what we saw that night, so I’m surprised people are so up in arms over it.  However, with that being said, Miley is definitely trying way to hard to separate herself from her Disney Hannah Montana character, to the point where she is hurting her brand.  There’s nothing wrong with trying to re-brand yourself, but there’s probably better ways to do it.

Sadly, all the talk about Miley Cyrus probably overshadowed Justin Timberlake’s performance.  JT had arguably one of the greatest live on stage performances that I have ever seen.  I would hate to be any artist that had to follow that.  I don’t care if you are a JT fan or not, but that guy is unbelievably talented, and his performance was phenomenal.  Here it is in case you missed it:

Finally, the 4th episode of the final 8 episodes of Breaking Bad aired on AMC last night, and the show took somewhat of a breather.  Spoiler Alert for those of you who have it on DVR! Last night’s episode showed how Jesse was convinced not to burn down Walt’s house by Hank, and then Hank proceeded to try and get Jesse to provide some testimony that would incriminate Walt for all his crimes.  Jesse failed to provide this evidence, and when Hank asked Jesse to wear a wire and meet Walt in person later on, Jesse abandoned the plan at the last moment, thinking Walt has an assassin prepared to kill him.

This particular episode definitely did not provide us with the usual edge-of-your-seat tension as before.  Instead, we are given some meaningful moments to ponder.  I found the most interesting  part of the episode to be the ironic impact Walt has suddenly had on all the other characters.  In the first four episodes of this season, Walt’s biggest threats have been his own brother-in-law Hank, and his former business partner Jesse.  Despite the threats they pose, Walt has refused to kill them, because he cares deeply for both of them, as Hank is his family, and Jesse is practically like a son to him.  For all the horrible things Walt has done, he is still willing to protect the ones he cares about.  The irony of this is the very cavalier attitude Walt’s loved ones suddenly have about killing people.  Skyler urges Walt to kill Jesse in order to protect the family.  Marie suggests that she is enjoying the thought of poisoning Walt, and Hank admits he’s willing to let Jesse get killed if it means incriminating Walt.    These moments are definitely setting the stage for an incredible final four episodes, which Breaking Bad fans anxiously await!