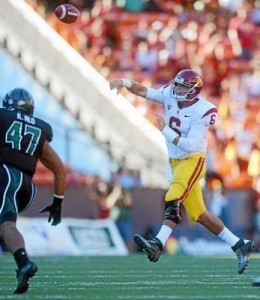 Happy College Football season everyone!  I’m not so sure how happy last night’s win over Hawaii was for Trojans fans though.  It was uninspired and unimpressive at times, but the Trojans defeated the Rainbow Warriors 30-13 on Thursday night in Honolulu.  The best news for USC is that they are 1-0, which is probably the most important fact for them at this point.  But there’s still much to be concerned about.

Midway through the 2nd quarter, the Trojans were so underwhelming, I was definitely wondering if USC athletic director Pat Haden would allow coach Lane Kiffin to return to the main land on the team flight after the game.  This team must have spent too much time at the beach, because they were losing by a score of 5-3 halfway through the 2nd quarter.  This was a game in which USC was a 23 point favorite coming in.  Fortunately, the Trojan defense helped break the game open, as Josh Shaw intercepted a pass and returned it 35 yards for a touchdown.

The quarterback situation was easily the most concerning issue for Southern Cal.  Cody Kessler started, played the entire first half and the first series of the 2nd half.  He was a pedestrian 10-19 for 95 yards, with one touchdown and one interception.  Early on, he looked more shaky than Dwight Howard at the free throw line, but redeemed himself slightly, with a 19-yard TD pass to Nelson Agholor .  Meanwhile, Max Wittek took most of the snaps in the 2nd half, and wasn’t much better.  Wittek was just 5-10 for 77 yards, and was sacked twice.  The Trojans went three and out on two straight series before he started to move the ball late in the 3rd quarter.  In the 4th quarter, he led one drive that ended in a field goal, and another that ended on a 3 yard run touchdown run by Justin Davis.

The good news for USC is that the defense looks very good.  The Trojans intercepted four passes, including Shaw’s pick 6.  The defensive line was excellent, getting consistent pressure on Hawaii quarterback Taylor Graham, while limiting the Rainbow Warriors offense to just 23 yards rushing and a total of 231 yards.  The Trojans will have to rely on this unit early on this season, until Lane Kiffin figures things out on the offensive side of the ball.

There were some bright spots on the offensive though.  Sophomore Tre Maddon rushed for 109 yards on 18 carries, and freshman Justin Davis ran for another 74 yards on 14 carries, to go along with his 4th quarter TD.  The great Marqise Lee caught 8 balls for 109 yards, although he did drop a couple of passes early on that stalled drives, and fumbled as well.

More than anything, the offense just looked completely disorganized and lacking chemistry.  The offensive line looked unsure of many of their blocking schemes, causing some running backs to run into their own tackles.  Outside of Lee, there wasn’t another receiver that really appeared to be emerging as a solid number 2 threat.  The Trojans also took 9 penalties that cost them 75 yards. If Taylor Graham hadn’t had one of the worst performance by a division 1 quarterback I have ever seen, the Trojans might have suffered an embarrassing loss.

It’s becoming clear now: two quarterbacks equals no quarterbacks.  The USC offense needs leadership in order to develop chemistry, and it can’t do that with their QB situation in flux.  Although neither Kessler nor Wittek look great, their lackluster performances can partially be attributed to being in limbo.  It seems like Kiffin might be leaning toward giving the job to Kessler, who completed his final 4 passes and played slightly more than Wittek.  However, Kiffin said “Neither of them separated themselves”, which makes you think we’re going to see both quarterbacks next week against Washington State.  In any case, the Trojans better iron out some of these issues over the next 9 days, because they are going to start facing some real competition next Saturday at the Coliseum.