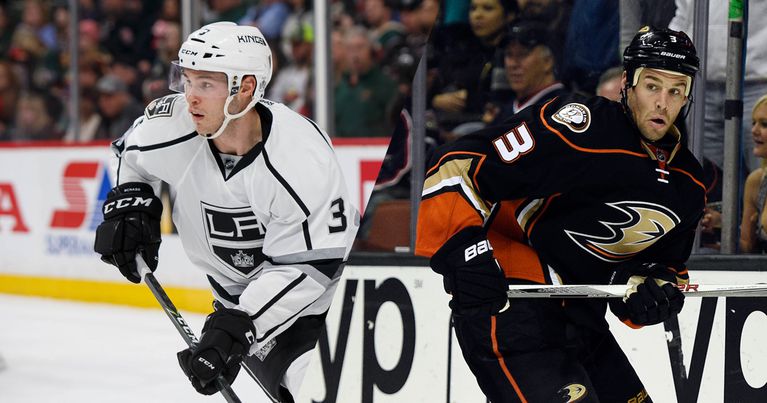 The Kings and Ducks both lost defenseman in the NHL Expansion Draft on Wednesday night.  The Las Vegas Golden Knights selected Brayden McNabb from the Kings, and Clayton Stoner from the Ducks.

In addition, the Ducks traded defenseman Shea Theodore to Las Vegas, and in exchange, the Golden Knights agreed not to select Ducks defenseman Sami Vatanen or Josh Manson.

Under the Expansion Draft rules, Las Vegas was required to select at least one player from each of the 32 NHL clubs.  However, since some teams had trouble deciding which players they wanted to protect from selection, they made trades with Vegas, like the Ducks did, sending them additional players so other unprotected players could not be selected.

In the case of the Ducks, they were forced to leave talented defenseman Vatanen and Manson unprotected, caused by having several players on their team with no-movement clauses, which forced them to protect those players.

Stoner was injured for much of last season, and carried a cap hit of $3.25 million.  That’s a big win for Anaheim.  However, Theodore was a promising young defenseman that needed to be traded in order to prevent the loss of two very talented young defenseman.

In the case of the Kings, there were several players who were candidates to be selected by Vegas such as forward Trevor Lewis, Kyle Clifford, Nic Dowd, and possibly even Dustin Brown.  However, the Golden Knights chose the young, hard-hitting defenseman McNabb.

The loss of McNabb gives the Kings an additional $1.8 million under the salary cap.  Although the Kings can bear the loss of McNabb’s talent, they were likely hoping a higher salaried player like Brown would be taken.