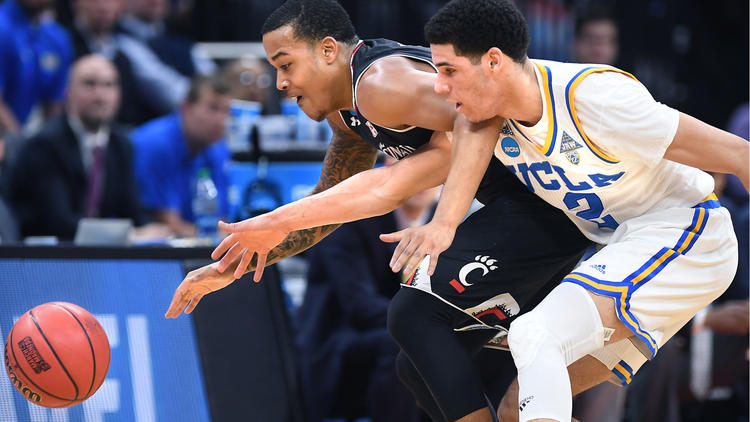 Lonzo Ball showed his brilliance again on Sunday night.  It also came just in time, as the Bruins finally pulled away from Cincinnati in the 2nd half to defeat them 79-67 in the 2nd round of the NCAA tournament in Sacramento.

Ball scored 18 points, while dishing out 9 assists, and grabbing 7 boards to spark UCLA’s offense after a difficult 1st half.  TJ Leaf scored 11 points and had 7 rebounds as well, as the Bruins scored 49 points in the 2nd half.  That completely changed a game in which UCLA trailed 33-30 at halftime.

“I don’t know of a more fun basketball team to watch when we’re clicking,” UCLA Coach Steve Alford said.  Their offense got going, but it was really their defense that sparked the team after halftime.  “The key to that was going to be defensive stops,” Alford said, “and we came out and got three stops in a row.”

The Bruins opened the 2nd half with a 10-3 run, which included dunks from Leaf and Thomas Welsh.    That gave them a 40-36 lead.  Shortly after that, UCLA would find their stroke from behind the arc, making three straight 3-pointers.  Two of them were from Ball, and the other from Bryce Alford.  That stretched the lead to 55-47 with 12:25 left.

The Bruins never looked back from there.  The only real question mark hanging over the team was the future of coach Steve Alford, who has reportedly been offered a 7-year $31 million contract to coach Indiana.  He once again, deflected the question when asked about it after the game.

“I’ve already addressed that matter and I’m not going to address it anymore,” Alford said. “This is about our team and what these guys are doing.”

The Bruins will now travel to Memphis to take on Kentucky on Friday in the Sweet 16.  It’s also UCLA’s 3rd trip to the Sweet 16 in the last 4 years under Alford.

UCLA defeated Kentucky back in December 97-92 in Lexington.  “It’s a very, very good basketball team,” Steve Alford said “I think they’re better now in March than they were when we played them in December and I think we’re better than what we were in December as well. Makes for a great matchup.”