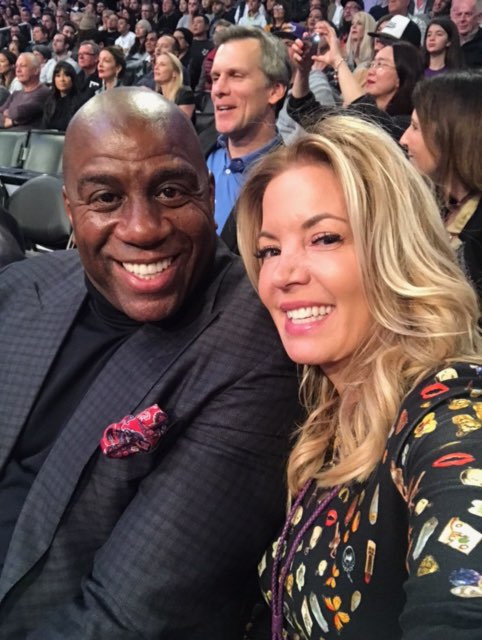 Last week Jeanie Buss met with Magic Johnson to talk about the state of the Laker franchise.  As you can see from the selfie they took from her seats, they made no secret about their meeting.  You can be sure that they were not reminiscing about Magic’s playing days, or about that old television show he used to host called “The Magic Hour” (which was easily the worst television show in the history of television).  Jeanie has to be strategizing a shakeup in the Laker front office, and specifically, replacing her brother Jim with somebody else as the head of basketball operations.  Jeanie was probably using Magic to generate ideas, and probably even gauging his interest in returning to the Lakers in some capacity.  I certainly can’t see Magic in a player evaluation role for the team, but I could see him in a higher level business operating role.  At most, overseeing the basketball operations department, but delegating to others.  He already looks bored of his ownership role with the Dodgers.  Nevertheless, this wouldn’t be too radical of a shift in leadership, but one that would appease the public more than anything else, as well as appease Jeanie and Magic, who both love the Lakers as much as life itself.   On the court things have been rough of late.  The Lakers lost D’Angelo Russell for a couple of weeks to another knee injury, and took a senseless beating from the Mavericks yesterday by 49 points, which was their worst loss in franchise history.  Time to cheer for more losses folks to keep that 1st round draft pick!

Speaking of losing, the Clippers lost Chris Paul to an injury again.  This time, another 6-8 weeks for a thumb injury.  I could swear I’ve seen this movie before, as well as the sequel, and it’s going to end the same way in the trilogy.  Blake Griffin will come back next week.  Then Paul will be back by the end of the season, and the Clipps will struggle to regain their chemistry.  They’ll fool some of you into thinking they can contend, and then they’ll either choke in the first round, or get blown off the floor in the second round against the Warriors.  Somehow, Doc Rivers and Steve Ballmer will then convince themselves to bring back the exact same team next season, even if it costs them another $400 million to keep Blake and Paul.  You’ve gotta give Doc Rivers credit for being able to bamboozle the former CEO of Microsoft, and convince him to keep the team together for this long.  This might also explain why Ballmer is no longer the CEO of Microsoft.

What a horrible pair of conference championship games we saw yesterday.  I refuse to accept the fact we had to watch two blowouts.  I’m so upset, starting today I’m going to be protesting, picketing, rioting, and forming support groups.  #NotmySuperBowl.   In Atlanta, the Packers played so badly, Aaron Rogers’ family probably won’t plan on making up with him anytime soon.  Stay positive though Packer fans.  You still have obesity, cheese, and 11 months of Winter to help you through this difficult time.  The Falcons are a way better team than everybody gave them credit for, and Matt Ryan has been arguably the best quarterback in the NFL this season.  The highlight of the game was the Falcons’ Robert Alford doing his best Lebron James impression…..

Over in the AFC Championship Game, Roger Goodell is going to need to fly to New England to investigate the Steelers claim that they were raped by the Patriots.  The Pats executed at a much higher level than the Steelers, and totally blew them out of the building.  Le’Veon Bell’s groin injury didn’t help Pittsburgh’s cause, but it wouldn’t have mattered anyway.  Unless Bell could figure out a way to shutdown the Patriots’ receivers, New England still would have handled business.  Bell probably told team doctors that all he needed to recover was a box of Pringles and two joints.  If Brady finds a way to win his 5th Super Bowl in two weeks, he’s definitely going to have a strong case as the greatest quarterback of all-time, which probably won’t sit well with many of you.  I’m going with the Pats.

It’s been just over a week, and the Chargers move to LA is already a total disaster.  In fact, the NFL owners are actually furious with Dean Spanos, and were privately hoping that he would re-consider moving the team back to San Diego.  If the NFL wants the Chargers back in San Diego so badly, why don’t they just write a check for it? I’m sure San Diegans would take them back, the same way you talk smack about your hot ex-girlfriend, until you are just giddy when she asks to get back together with you.  Spanos isn’t going to move them back to San Diego though.  He’s done the accounting, and he knows the money is in LA is great, regardless of how much people are going to hate him.  He’s going to crash the party despite the fact nobody cares about him.  As you can see, last week’s rally went really well…..

I could swear I entered a time machine on Saturday, and was watching a Steve Lavin coached UCLA basketball team.  It wasn’t Lavin, but his horrible reincarnation, Steve Alford, as Arizona upset the Bruins at Pauley Pavilion.  It wasn’t the fact the Bruins lost.  It was how they lost.  Alford’s team couldn’t defend the Wildcats, he couldn’t make adjustments, and they were outmuscled in the paint.  The Bruins have a phenomenal offense, but if they can’t defend teams like Arizona in March, they are going to be sent home very quickly.  Alford knows his team needs defense, but can he actually teach it? Based on what we’ve seen from him in the past, there’s no reason to believe he can.  As amazing as Lonzo Ball is, he can’t do it all himself.  To make matters worse, UCLA is now in danger of finishing 3rd in the Pac 12, unless they get some serious help from other teams, and less likely to be a #1 seed in the West for the NCAA Tournament.  There’s certainly time to get their act together, but simply being an offensive juggernaut isn’t going to be enough.  At some point, coaching has to come into play.

As for the Trojans, they held off Arizona State yesterday, and ended up going 1-1 against the Arizona schools.  After a great start, USC is just 4-4 in conference play, good enough for only 6th place.  The Trojan defense is just as bad as the Bruins’, but they aren’t nearly as explosive offensively to make up for it.  They’ll have a cross-town showdown with the Bruins at the Galen Center on Wednesday night.

I don’t understand the rationale of baseball hall of fame voting.  If you get 75% of the writers votes you are in the hall of fame, but why do writers decide to vote for someone one year, but not in another year?  You are either a hall of famer or you aren’t.  It shouldn’t matter who else is on the ballot.  I also think the fact that Ivan Rodriguez made the hall of fame tells me that eventually Barry Bonds, Roger Clemens, and other documented steroid users will get in.  The younger generation of writers is more progressive and thinks that these players were already hall of famers with or without the juice.  Besides, if you don’t vote for Bonds, he’ll probably take a baseball bat and smash your car out of roid rage.

Ok guys, admit it, your wives and girlfriends have made you start watching The Bachelor on ABC.  Even ESPN’s Mathew Barry has started a fantasy league revolving around the show.  It’s really like repeatedly watching a live train wreck on television.  As gorgeous as many of these women are, most of them are crazy, or just trying to monetize their fame of being on the show (maybe even both).  That’s fine, but no need to make yourself look like an idiot in the process, even if it’s for our entertainment.  This season, the Bachelor is Nick Viall, who was among the finalists in several previous seasons of The Bachelorette.  However, the true entertainment factor on the show is Corinne Olympios, a 24 year old business owner from Miami.  Corinne was totally “that girl” in college, who was sloppier than Lindsay Lohan at happy hour, and getting nailed by the entire football team.  That was pretty evident when she took off her top, as well as made use of the “whip cream bikini” in the first three episodes of the season.  Still, regardless of what Nick thinks of her, there’s no way the producers are going to let him cut her from the show for a while.  I have to say, the fact that this woman runs a company (even if inherited from her father), should give every aspiring entrepreneur hope that they can one succeed.