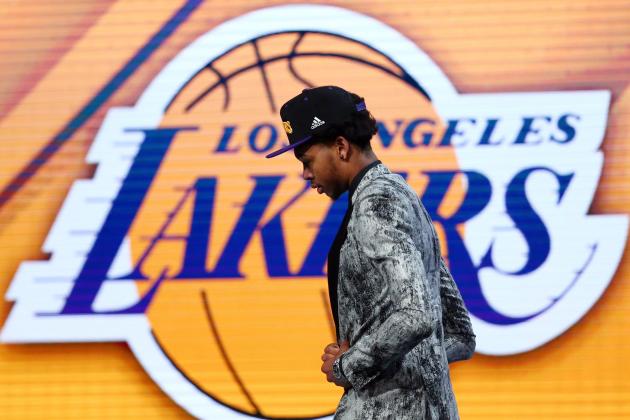 The Lakers didn’t screw up the draft.  They didn’t overthink it, and took what the 76ers didn’t take, which was Brandon Ingram.  Ingram is arguably the best player in this years draft, and easily the best fit for the Lakers.  More importantly, the Lake Show is finally developing an identity.  That is defined by uptempo, position-less basketball.  Ingram can play 3 positions.  So can Julius Randle, while Jordan Clarkson and D’Angelo Russell can play both guard spots.  If you are ok with building around youth and assuming you’re doing it with the right guys, the Lakers are off to a great start.  As for free agency, I find it strange that the Lakers don’t have a meeting scheduled with Kevin Durant, even if the odds of Blake Lively becoming my girlfriend are greater than him signing in LA.  Maybe Mitch Kupchak is going to try to lock down another veteran or two, and then attempt to secure a meeting with Durant.  Otherwise, there isn’t going to be much to pitch to Durant, other than how nice the beach is in Southern California.  For a team that’s been so superstar hungry the last few years, its hard to believe that Kupchak doesn’t have a plan.  He has one, and regardless of how effective it’s going to be, he knows how to operate with the secrecy of the FBI.

As for D’Angelo Russell, his Foot Locker commercial where he poked fun of his cell phone incident was very well done.  No matter how much you hate Russell for breaking “the man code”, he’s owning up to what he did, and it’s part of the maturation process for a teenager that is new to the NBA.  Then there’s Nick Young, and I don’t think there’s any way that those two can be teammates again, after D-Lo essentially monetized the incident with the commercial.  I don’t think anybody really cares though, because ultimately, Nick Young was the one who cheated on his girlfriend, and nobody wants him on the Lakers anymore.  Actually, the biggest trade of the NBA offseason so far has been Swaggy trading his classic Impala back to Iggy Azalea, in exchange for his engagement ring.  In case you haven’t seen Russell’s Foot Locker commercial, here it is…..

Meanwhile, the Clippers actually had a first round pick this year.  Doc Rivers made a solid, but predictable 1st round draft choice with Brice Johnson.  Johnson might end up being a useful player off the bench, however, Doc Rivers General Manager playbook continues as follows: draft players out of the ACC, and acquire players who played well against you, played for you in Boston, or are related to you.  This type of cookie-cutter operation should keep the Clippers in 2nd round purgatory indefinitely.

On to baseball, where the Dodgers have found a way to fall further and further behind the Giants in the NL West.  I guess Clayton Kershaw must be washed up since he gave up 4 runs last night to the Pirates.  Keep in mind, LA is falling further and further behind after a stretch where prior to their series against Pittsburgh, they played their best baseball of the season, which still hasn’t been good enough.  They are barely hanging on in the wild card race, and some of you seem to think this is ok given the youth on the team.  As far as I’m concerned, this has been unacceptable.  When Andrew Friedman took over the team, the Dodgers had a roster that was a World Series contender.  Now they likely won’t even make the playoffs.  Even if they did, I don’t care what the statistics say, I wouldn’t trust any Dodger starters not named Clayton Kershaw in a playoff game.  Frankly, the Dodgers are a lot closer to being trade deadline sellers than buyers, and watching them continues to be aggravating.

For the Angels, despite yesterday’s win, they have now lost 6 of 7 games, and are quickly sinking to the bottom of the American League standings.  Only the Minnesota Twins have a worse record in the AL, and they aren’t even trying to win games.  The Halos are on pace to lose 95 games, their worst under Mike Scioscia.  The worst part about it is that the injuries that have ravaged the team are probably masking the real issues: the starting pitching isn’t that good, and the lineup is fundamentally flawed.  They are still getting underwhelming production out of left field, the middle of their infield, and there is very little to no help on the way in their farm system.  Even putting aside the disaster that is this season, Billy Eppler is going to have to get really creative to improve this team in the coming seasons.

To the ice, where it’s been an interesting last week of the offseason for the Kings and Ducks.  Of course the year the Kings don’t win the Stanley Cup, their star players finally get recognized for awards.  Drew Doughty won the Norris Trophy last week as the league’s best defenseman, and Anze Kopitar won the Selke Trophy, as the league’s best defensive forward.  It’s nice to finally see the voters have actually subscribed to cable, and stayed up past their bed times to do their jobs and cover the games.  The Kings also made a very smart move in letting scoring left wing Milan Lucic go, while signing Trevor Lewis to a long term deal.  Players like Lewis win championships, while Lucic is simply a luxury for a team in cap hell.  On the other hand, I’m not sure why the Ducks traded goaltender Frederik Anderson so damn soon.  They could have afforded to sign Anderson, then use him as an asset to trade much later.  Their offseason moves have been about as confusing as Hilary Clinton’s sexuality.

That Argentinian beat down of the USMNT in Copa America was a reminder that we still can’t hang when it comes to soccer.  It’s also a reminder that it’s probably time to remove Jurgen Klinsmann from his head coaching duties for someone who will actually trust his younger budding stars.  Klinsmann showed about as much trust in those younger players as Iggy Azalea has for Nick Young.  At least this tournament tells us now that we can’t hang with the best, instead of waiting for another year or two on an even bigger stage to let us know that.

Not only was I super pumped for Game of Thrones last night (more on that in a moment), but also, Shark Week on Discovery.  This year it has come about a month earlier than usual.  I definitely appreciate the focus on more scientific talk about Sharks, rather than scaring me about the next time I’m in the ocean.  That more scientific talk includes a discussion on Shark sex, which doesn’t exactly go down with your typical love making music in the background, and is much more analogous to an even more aggressive form of Fifty Shades of Grey.  Nevertheless, given the amount of sightings off the coast of our Southern California beaches, I have no desire to enter the ocean past my knees at this point.

Since Great Britain voted to leave the EU, we should all celebrate by drinking tea, canceling our next dentist appointment, and watching cricket.  It’s good to see that the financial markets didn’t overreact to the news on Friday or anything.  The US version of the Breexit we can look forward to is the Obama exit coming this fall.

Finally, a huge season finale of Game of Thrones went down on HBO last night.  Spoiler alert for those of you who have yet to see it, so read no further if that is the case.  There was more that happened in the first thirty minutes of that episode than in the entire season! The Red Wedding was like kindergarden, however, what Cersei did was college, when she took down Kings Landing with wildfire.  I suddenly went from feeling terribly bad for Cersei, to hating her guts once again when she kllled Margaery, one of my favorite characters, but you knew she was going to get her revenge.  For nearly a full season, we forgot just how evil the woman is, and how far she will go to stay in power.  I guess you could say she got her trial by combat when it was all said and done.  Then there’s Tommen, the biggest pansy there ever was for a King.  He really re-defined the phrase “Kings Landing” with his suicide.  He probably decided to jump when he realized that he and his mother were seeing the same barber.  In some ways, Cersei losing her son that way was poetic justice for what she and Jamie did to Bran.  So many people died at once, it was hard to come to grips with it.  The Gily and Sam story wasn’t all that necessary, other than reminding us that Sam actually grew some balls.

Then there’s the Starks, who suddenly had the greatest comeback since the Beatles.  Arya’s revenge against Walder Frey made her “no name” nonsense totally worth the wait.  She’s now the “Frey Slayer”.  Something tells me Jamie Lannister isn’t so sad to see him go.  Funny how Lancel was stabbed once by a child, and couldn’t even move, while Arya was stabbed a bunch of times, yet managed to live and eventually take down her enemy like she was a Ninja Turtle.  If I were on my way home to Winterfell I’d wanna stop for food at McDonalds.  Arya decided to stop to kill somebody on her way home to Winterfell.  Sansa finally grew a brain, and decided not to trust Littlefinger.  After all this time, all she cares about is kicking ass, rather than being in power, which is exactly what she should be doing.  By the way….who knew that Sansa was actually much taller than Jon Snow? Of course we also learned that Jon’s mother is Lyanna Stark, which really makes him Ned Stark’s nephew.  Ned obviously lied because he knew the Lannisters would kill Jon if they knew he was a Targaryen.  It also explains the superpowers than Jon has, similar to Daenerys.  Speaking of Daenerys, she might as well be called the “Breaker of Hearts” instead of the “Mother of Dragons”.  When did Daario become as clingy as Ser Jorah?  Lady Mormont is one hell of a leader, and basically gave the Game of Thrones equivalent of a Ted Talk during that episode.  The only thing that would have made that episode better is if they somehow introduced Lady Stoneheart.  The last two episodes were maybe the two best of the entire series.  However, this is what happens when you realize you have to wait a whole year for the show to come back…..