So much for a competitive NBA Finals.  The Cavs were supposed to be out of excuses this time, with a healthy and rested roster.   Instead, they’ve been dominated by the defending NBA champion Warriors thus far, and are going back to Cleveland down 0-2.  Lebron’s greatness is always a constant.  However, the problem for the Cavs is that they can’t compete offensively without Kyrie Irving and Kevin Love, and they can’t compete defensively with Kyrie Irving and Kevin Love.  It’s looking more and more like a bad matchup.  Matthew Dellavedova and Timofey Mozgov need bigger roles, otherwise the Warriors bench will continue to issue beatings.  Klay and Steph haven’t needed to do very much, the Warriors turned it over 20 times yesterday, the Cavs shot 14 more free throws, yet Cleveland still lost by 30 in game 2.  JR Smith has probably taken more shots of tequila in the last week than shots on the court.   As for Lebron’s legacy, if the Cavs do indeed lose this series, it’s going to be a bad look for him.  The only questions left to be answered in this series include: how many more people Draymond Green will kick?  How many more shots to the balls will Dellavedova deliver? And how many more times will I have to hear Doug Collins remind me that he coached Michael Jordan? If he says it one more time, I will hunt him down and force him to watch the new Ghostbusters movie as punishment.

You’ve gotta love the fact that Kobe did a commercial for the new Ghostbusters movie all by himself.  He couldn’t get Rick Fox, Derek Fisher, or anybody else to represent the other three Ghostbusters with him?  For better and worse, that’s so Kobe.  Speaking of the Lakers, the early word is that getting free agents to take their money this summer isn’t going to be easy.  Kevin Durant, Lebron, DeMar Derozan, Nicholas Batum, and Andre Drummond are all a good bet to stay put.  Hassan Whiteside and Harrison Barnes seem like the only free agents with a small chance of leaving, but the Lakers would have to grossly overpay to get them.  That means you better get used to the idea of a slow and steady rebuild and not some fantasy basketball overnight re-load that makes the Lakers  contenders again.  That’s probably ok with fans, but it might not be ok with Jeannie Buss, who could can her brother and Mitch Kupchak next year.  In case you missed the Ghostbusters commercial, here’s Kobe, “keeping it 100” like he usually does……

I think it’s becoming obvious at this point that the Dodger front office has no intention of winning anything this year.  The latest evidence of this was when outfielder Carl Crawford, who is still owed a total of $35 million this year and next, was designated for assignment.   At this point, Trace Thompson has probably earned a spot as an everyday player, which is smart.  What’s not so smart however, was to start rookie Julio Urias against the Mets and the Cubs, instead of breaking him in against teams like the Padres and Rockies, so he can build his confidence.  Since Andrew Friedman is supposed to be a genius, I thought this would be a little more obvious to him.  Just think how much better the Dodgers would be with a bat like Ryan Braun, and a reliever like Aroldis Chapman.  Too bad the Boys in Blue don’t want to give up the prospects required to acquire those two.  My favorite quote over the weekend was from Clayton Kershaw, after earning his 8th victory of the season with 6 shutout innings against the Braves.  Kershaw said “six innings is not acceptable.  I’ll take it for tonight, but I don’t even want to leave three innings for the bullpen.”  What he’s really saying is “I wouldn’t trust those jokers in our bullpen with a cup of coffee.”

As for the Angels, they got a nice series win against a good Pirates team over the weekend.  However, do they have any starting pitchers left that aren’t injured? Nick Tropeano is the latest to join the disabled list, along CJ Wilson, Garrett Richards, Andrew Heaney, and Tyler Skaggs.  They say in the majors that you spend two months figuring out who you are, two months fixing it, and then going for it in the last two months.  The problem is the Angels problems don’t seem fixable.  Albert Pujols probably isn’t going to fix his .238 average.  Garrett Richards, Andrew Heaney, and CJ Wilson haven’t given us any reason to think they are going be healthy and effective.  Mike Trout seems like the only reason to go see an Angel game these days.  Other than that, it’s probably going to be a long summer for the Halos.

When I was 7, my family and I ran into Muhammad Ali while coming out of a restaurant in San Clemente, CA.  The man was incredibly gracious, signed autographs for both my sister and I, while he and his entire family took the time to engage in conversation with my family.  It was that kindness that was just one part of the incredible legacy he leaves behind, after passing away over the weekend.  He was a humanitarian, a philanthropist, in addition to being probably the greatest boxer ever.  Today, there is often controversy as to whether or not athletes should publicly voice their opinion over social issues.  Ali embraced tackling these social issues through his defiant nature, and leaves a legacy that goes well beyond sports.  He stands alongside athletes like Jackie Robinson, Hank Aaron, and Jim Brown, whose achievements beyond the playing field had a lasting impact on this country.  Ali had such deep convictions, they actually cost him three years of his prime boxing years when he refused to be drafted into the Vietnam War.  His bouts in the ring with Joe Frazier were legendary.  However, I’ll always remember getting chills in 1996, watching him light the Olympic torch in Atlanta.

We’ve had three great games so far in the Stanley Cup Final.  Of course ESPN just glosses over it and moves on to where Johnny Manziel spent his evening partying.  The Penguins lost an opportunity to take a commanding lead in the series, but the Sharks got back into it with an overtime win on Saturday, now trailing 2-1 in the best of 7.  Look guys, if there’s anybody that knows it’s always possible to choke away a series lead before it’s over, it’s the San Jose Sharks.  I also love Logan Couture accusing Sidney Crosby of cheating on face offs.  This is the same guy a few years ago who stuck his stick out while he was sitting on the bench to knock the puck away from a Kings player.   I still like San Jose to win the series, but this one might take 7 games to decide.

There are some animals like sharks and gators that fascinate me, yet completely terrify me for fear of being eaten by them.  Last week a 52 year old woman was attacked by a Great White Shark, right in front of my place in Corona Del Mar.  After that, I was too scared to take a shower, let alone go in the ocean.  It’s almost amazing that we don’t have more shark attacks give the number of Great Whites that are constantly being spotted of the SoCal coasts.  That still doesn’t make it any more comforting every time any of us enters the ocean, even if the chances are remote.  Then there’s those dudes that were playing golf in Palmetto, Florida, that ran into the biggest alligator anybody has ever seen.  Does this thing eat golfers?  I’m not sure if those guys were playing golf or walking through Jurassic Park.  If I saw this thing I’d probably run the other way, right back up the fairway.

Finally, another episode of Game of Thrones went down last night on HBO.  Spoiler alert for those of you who have yet to see it, so read no further if that is the case.  I would ask how in the hell The Hound is still alive after Brienne skewered him, but that would be ridiculous since Jon Snow came back to life as well.  It’s an interesting twist, but not necessarily a storyline I find more interesting than anything that is taking place already.  After this season there’s only going to be 7 episodes in season 7, followed by another 6 in season 8 which will conclude the series.  That’s right folks.  That means there are only 16 episodes left in the entire series.  That also means they really need to pick up the pace to give us all satisfying conclusions to everything.  I sure wish we had gotten to see Daenerys and the Dragons, and catch up with Bran.  Nevertheless, the Hound is bound to take some revenge on those people that killed his group.  Arya could probably use his help right now though since she is bleeding profusely in the middle of the street.  She is sure to survive this one though, and I have no doubt she will get her revenge.  As for Sansa, my guess is that she reached out to Littlefinger for help, but this feels like it’s going to bite her and Jon in the ass.  Then again, going into battle with only 2,000 men isn’t going to be enough.  I still can’t figure out what Margaery’s end game is.  Whatever it is though, it’s probably going to work since her husband has no idea how to be a King.  Who knew that Yara was gay? There’s gotta be some epic battle scenes in the next three episodes between Jamie’s showdown at Riverrun, Jon’s battle at Wintefell, and a fight involving The Mountain at Kings Landing.  It’s going to be a bloody last three episodes. 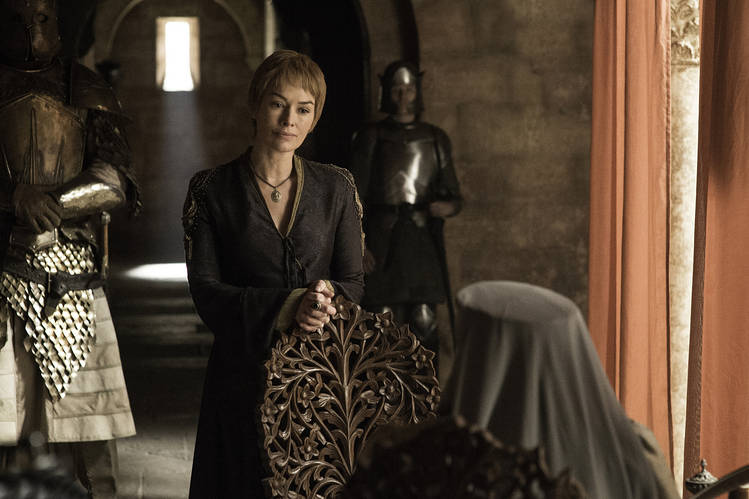