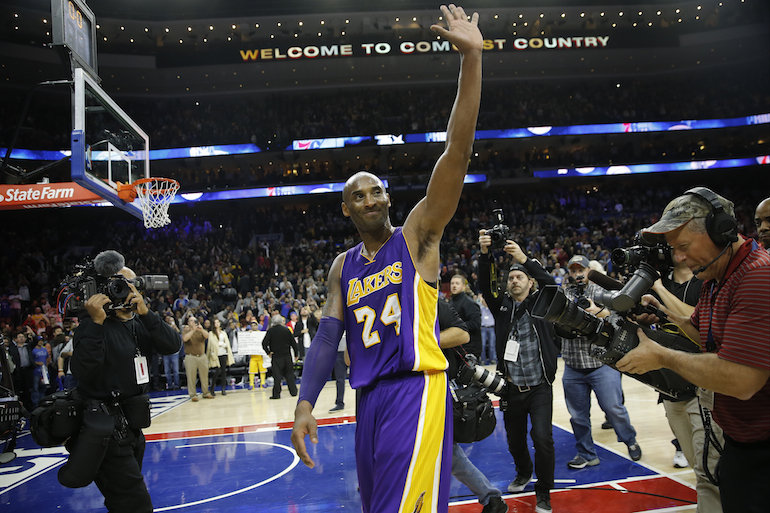 It’s not a sad moment.  It’s a celebration, and one that is so big, I felt that it would have truly been minimized by slamming it into my usual Monday Morning Coffee column.  If anything, the farewell tour has been therapeutic, because it’s helped distract you a little from the fact that the Lakers stink.  The only thing sad about it is the fact that when it’s over, you will have to face the reality that the Lake Show has some serious work to do.  More than anything though, the lengthy farewell tour has really put into perspective just why Kobe Bryant is so special.

Yesterday, Karl Malone appeared with Dr J on SportCenter to talk about his memories of Kobe.  The same Malone that was irritated when Kobe called him off when he tried to set a pick for him in the 1998 All Star Game.  The same Karl Malone that had beef with Kobe when the Mamba claimed he was hitting on his wife in 2005.  After all that, Malone explained that despite playing 19 years in Utah,  Kobe was somebody that he wished he could have played with longer than the one season he did.  He had deep respect for the fact that after every game, Kobe was feverishly studying what he did wrong, even in the games he played exceptionally well.  Malone even called Kobe a friend.  That’s how much respect Kobe commands.

That’s exactly what the Kobe farewell tour is all about.  Kobe has plenty of die hard supporters.  He also has plenty of haters.  The last few months have given even those haters the chance to show him respect for everything he’s done, and how he’s approached the game.  NBA fans all over the country are flocking to arenas like Geese, chanting his name, just to get one last glimpse of his greatness.  They also want to show him respect because he commands it with his approach, if nothing else.  You may not agree with that approach, but that dedication to greatness deserves the celebration.

When great talent meets great work ethic, you get Kobe Bryant.  My favorite thing about The Black Mamba is his accountability.  For twenty years, he has accepted the responsibilities that go with being an NBA superstar for the most successful franchise in the modern era.  That has meant dedicating himself to improving as a player, a leader, and a man since he came into the league as a teenager.  That also has meant playing through injuries with regularity, because Kobe appreciates the fan that works hard and pays big money for a ticket to see him play once a year.  You can’t ask for anything more if you are a Laker fan, since most of them have the expectation of winning championships.

I don’t know about you, but not only do I watch sports because it’s a therapeutic escape from reality, but I also watch in hopes of witnessing those unbelievable moments of history and greatness.  Whether it was his 81 point game, five championships, his streak of 9 straight 40+ point games, his streak of 4 straight 50+ point games, or numerous shots that made you drop your jaw because of the degree of difficulty, Kobe gave us countless moments of greatness.

For many Laker fans in Southern California, Kobe feels like part of their family.  For the last twenty years, he has been the Los Angeles Lakers.  He’s had ups and downs like your kids do, but it’s all just part of the journey.  However, more than anything, Kobe is an inspiration to us all.  He not only knew that he wanted to be an NBA player, but he set out to be one of the greatest of all time, and he accomplished that.  That drive and dedication to greatness is something that everyone should admire, and take with them in whatever endeavors they pursue.  So after twenty years, thank you Kobe, for being an inspiration to us all.  It’s been a long goodbye, but it’s been well worth it.