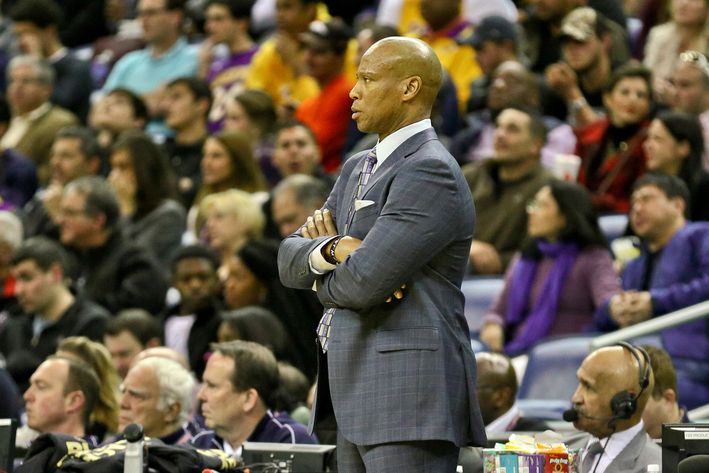 Ok Byron Scott haters.  You’ve got me.  I can’t defend the man anymore.  There was nothing wrong with making D’Angelo Russell have to work for playing time.  There was nothing wrong with making Julius Randle have to earn it either.  Now there’s only 27 games left.  They should have been starting and playing more minutes to speed up their development about 20 games ago.  Nobody was ever going to judge Byron on how many games he won this year.  It was all about player development, and making those young players feel good about what they were working toward.  The comments and behavior from Jordan Clarkson and Russell at last week’s All-Star game were a huge indictment of Scott’s relationship with players the Lakers are going to be building with for the foreseeable future.  They hate their coach.  Now, Mitch Kupchak even sees that as well.  Several months ago, the Lakers GM said that Scott was doing a great job under the circumstances.  Last week, he gave absolutely no such support, and said that Byron is the Lakers coach and “we’ll let you know when that changes.”  Byron isn’t nearly as bad of a coach as you’re all making him out to be.  However, it’s safe to say that he is not the right coach for this team moving forward.

Kobe Bryant is really something.  If I dislocated my finger, I’d be sitting at home for weeks.  He’s back in action 1 minute later.  He’s doing it all for the fans who want to see him one last time……

Across the hall, Doc Rivers strikes again.  This time, Rivers traded for Jeff Green, another completely ineffective small forward to stick in his lineup for the rest of the season.  Every trade deadline, somebody is trying to trade for Green, thinking that he is the “missing piece” for a championship contender.  It didn’t work out in Boston when Rivers was there, it didn’t work out in Memphis, so I’m not sure why anybody would think it would work in LA (especially Rivers himself).  The funny part is, Lance Stephenson was just starting to turn it around and help the Clippers depleted bench, then Doc gets rid of him.  Doc probably doesn’t care about any future draft picks because CP3 and Blake Griffin might not be here in another 18 months.  Based on what we saw Saturday night against the Warriors, with or without Blake, it doesn’t look like the Clipps are gonna get past the 2nd round again.

The NBA trade deadline came and went last Thursday, and it was completely uneventful. It was also a reminder that NBA General Managers have absolutely no balls.  The Chicago Bulls have a bunch of front court players that will be free agents like Joakim Noah an Pau Gasol and did nothing.  I guess they are content losing to Lebron James in the playoffs every spring.  Oklahoma City is 18 months away from losing Kevin Durant and Russell Westbrook, yet didn’t have the guts to add an all-star like Gasol, who would have been a perfect missing piece.  The Toronto Raptors are clearly the 2nd best team in the East, but did nothing to improve their chances of beating the Cavs in the conference finals.  It’s no wonder that only a handful of NBA teams have won championships in the last 30 years.  Team executives are gutless!

In college hoops, does anybody have any idea who the favorite is to win the NCAA Title? Vegas will tell you that it’s Carolina, Oklahoma, or Michigan State, but that seems more like a kiss of death these days.  When you get ranked #1 in the polls, it seems like your stay there is even shorter than a Kardashian marriage.  Too bad UCLA won’t be participating in the madness of March after taking another body blow to their season against Utah.  USC will be in the mix, but their chances of winning the Pac 12 have faded.  Hopefully we can look forward to more of this stuff from college basketball fans in March….. 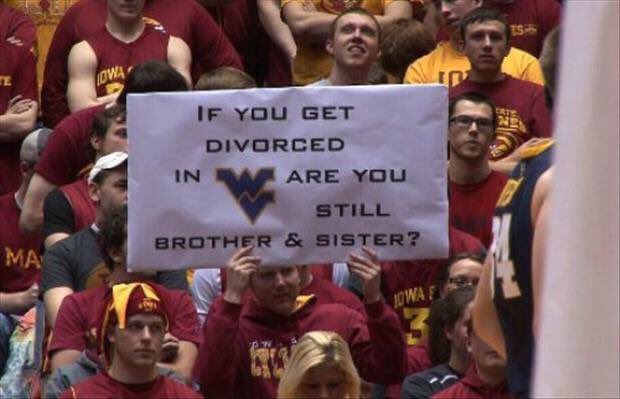 I realize that trying to find a franchise quarterback in the NFL these days is like trying to win the Powerball.  However, the Rams would be foolish to go into the season with Case Keenum as their starter.  The likelihood of Brock Osweiler hitting the market is pretty unlikely, but the Rams would be wise to take a flier on Robert Griffin III.  It wasn’t that long ago that RGIII was actually a decent quarterback.  He certainly wasn’t the same after he tore his ACL, but the man might still be an effective player if given the chance.  There’s certainly nobody in the draft that would fall to the Rams at #15, unless you’re a believer in Cardale Jones, and want to take him in round 2.  However, RGIII is a low risk, high reward move they would be wise to make.

In baseball, Dodgers President of baseball operations, Andrew Friedman, did an interview with the LA Times last week, with his thoughts on the season and the Dodgers plan moving forward.  After reading that piece, I came away with the impression that Friedman has no understanding of the expectations that are on him in Los Angeles.  He stressed the idea of building the farm system because having an extremely high payroll isn’t sustainable.  That’s ok, but the strong farm system was already in place before Friedman arrived.  He mentioned winning the division title a number of times, as if the General Managers that came before were unable to do that.  In fact, the General Managers that came before him not only kept the farm system strong, but also built teams that won more games and went further than him in the playoffs.  Those executives were fired because they couldn’t put the Dodgers over the top to win a World Championship.  Someone should inform him of this because he’s pretty naive to think otherwise.

Meanwhile, the Angels pitchers and catchers reported to Arizona, but they learned that they may not have Albert Pujols to start the season.  The Halos have a few question marks in their lineup, including 2nd base, 3rd base, and left field, so hopefully Pujols won’t take too long to get back in the lineup and get his game going.  However, I’m not as down on the Angels as most people.  I think their pitching is going to be pretty good this year, and their bullpen seems sturdy enough.  They play in a tough division with the Astros and Rangers, but the Angels showed their roster was good enough to stay in the race against those teams until the final days of the season last year.  It’s no surprise that former Halos GM Jerry Dipoto admitted that he and skipper Mike Scioscia had an unhealthy relationship last year, and disagreed on a number of issues.  It’s pretty early, but it seems as though new GM Billy Eppler and Scioscia are on the same page thus far.  That should provide more stability on the field this season.

The LA Kings just completed a 7 game Grammy road trip in which they went 3-3-1, but there were a number of casualties.  The list includes Jonathan Quick, Marian Gaborik, Anze Kopitar, and any Kings fans’ sobriety.  With the injuries piling up, the Kings lead in the Pacific Division is nearly gone, and both Anaheim and San Jose look poised to blow right past them in the standings.  The Kings have to have Kopitar, Quick, and Drew Doughty in their lineup, or else the team just isn’t a threat to do much.  I mean last week marked the first time I can remember the Kings ever having a lineup consisting of only North American players.  Meanwhile, the Ducks have been on fire since Christmas, sporting the league’s best record since that time.  It was an ugly start, but suddenly, the Ducks look like the contending team we thought they would be.

What another brilliant episode of The People vs OJ Simpson last week.  This episode was focused mostly on Robert Shapiro’s decision to add Johnny Cochran to the defense team, and convincing OJ that it was the right move.  There were two great parts of the episode for me.  The first was the opening scene, where Robert Kardashian is taking his kids to Chin Chin restaurant.  Kardashian reminds all his kids that being honest and being a good person is way more important than fame.  Who didn’t fall out of their chairs laughing when this line was uttered? If only Robert could see how his daughters have capitalized on fame, years after he passed.  Seeing the kids may not be necessary for the OJ story, but it sure does enhance the entertainment value of the show.  I also loved when OJ (played by Cuba Gooding Jr.), asked Robert Shapiro if he “wants to make this a black thing?” when questioning whether or not to add Cochran to the defense team.  He then reminds us how ironic the race issue was in the whole case by saying “I’m not black, I’m OJ!”.  That line was totally over the top, and so is John Travolta in his portrayal of Robert Shapiro, but they do a great job of re-living this whole drama for us.  Looking forward to seeing what’s next!

Finally, another good episode of The Walking Dead went down on AMC last night.  Spoiler alert for those of you who have yet to watch it.  Who saw this one coming? This episode was highlighted by the sudden love affair that emerged between Rick and Michonne.  The funny part is the episode definitely implied that it would happen from the start when we see that she was living with Rick and Carl, but nobody would have imagined that a romantic relationship would have ensued.  Even better is the fact that Michonne has been accepted as family by Carl, who lets her know that if she became a walker, he would make sure he would be the one to kill her since she is like family.  That’s exactly why he didn’t kill Deanna, so he could let her son Spencer do it.  Since Rick and Michonne’s relationship was formed as a result of the apocalypse, as a couple, they will probably do much better than his previous relationships (assuming they can both survive).  In fact, when they both leap out of bed naked and point their guns at the character we know as “Jesus”, that was a perfect example.  I don’t know what to make of this Jesus character.  I’m sure comic followers know where this is going, but he must somehow be connected to Negan, who is obviously evil, so that means he can’t be good.  How did he get to Rick’s bedroom though with Darryl supposedly watching him? What a stupid decision by Rick and Darryl to chase him down when they could have just split with the supplies the group needed.  Overall it was a “lighter episode” for the Walking Dead, but one that still had enough action to keep you engaged.  It was enjoyable, but I’m sure the intensity is going to pick up again very shortly. 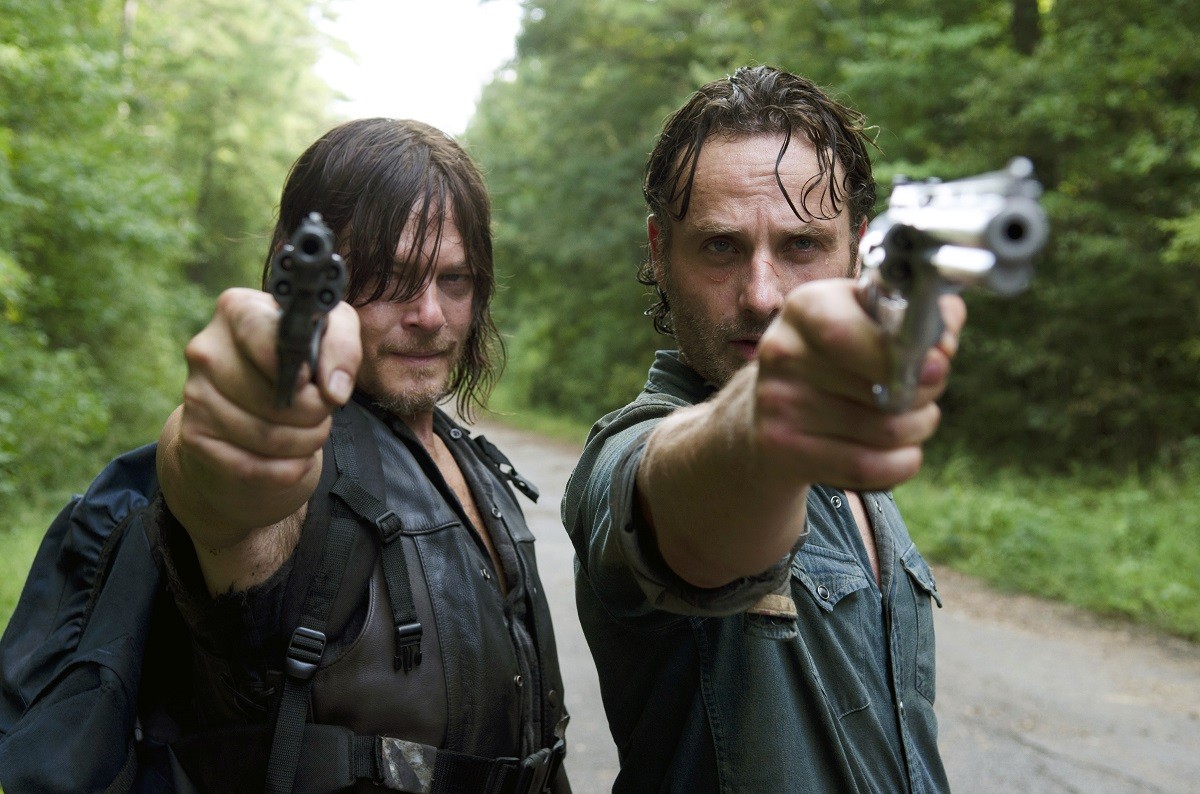