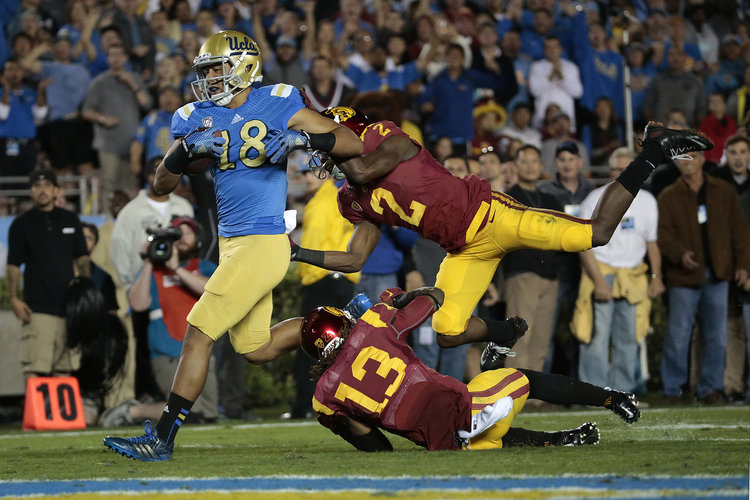 I think Ron Burgundy said it best.  “That escalated quickly.  That really got out of hand.”  Yup.  That’s what went down at the Rose Bowl on Saturday, as the Bruins took down the Trojans for the third year in a row.  I thought it would be the running ability of Brett Hundley that would beat the Trojans.  So did Sark, who’s Trojans did not allow the UCLA QB to run.  Instead, it was Hundley’s throwing ability that picked apart the Trojan defense all night.  He spread the ball around to 10 different receivers, while throwing three touchdown passes.  When you really think about it, this was about as surprising as Kim Kardashian appearing naked in a magazine.  Brett Hundley is a much better player than Cody Kessler.  The Bruins are more talented at the key positions, and have more depth than USC.  Let’s not get carried away and say that UCLA “owns LA” because that would be as naive as saying the Clippers own LA.  The Bruins still have to prove they belong with the big boys by getting to the Pac-12 title game, beating Oregon, then maybe showing what they can do on the national stage, if they are lucky.

As for the Trojans, most USC alums lost their minds last year when they went 10-4, with three different coaches.  With only seven wins right now, they could burn Tommy Trojan to the ground.   They might also refer to their coach as “Seven Win Sark”, as UW fans did in previous years.  Despite a solid recruiting class last year, this wasn’t going to be a smooth transition for Sark.  They still need to recover from their scholarship ban, and Sark needs to get his own recruits in the program.  Reality is that this is more like a 3 year rebuilding project, which many myopic Trojan fans didn’t come to grips with until Saturday night.  I’m surprised we didn’t see more playing time for recently reinstated cornerback Josh Shaw .  USC was really drowning without him.

The Trojan loss coupled with the Notre Dame disaster against Louisville means that USC and Notre Dame will play in the toilet bowl next weekend at the Coliseum.  This is going to be one of the most irrelevant games in the history or this rivalry.  The Irish have now blown two games this season because of their kicking game.  Not to mention the fact that for the last three weeks, Brian Kelly’s team is completely disinterested, and unprepared for games against mediocre opponents.  After making it all the way to the National Championship game two years ago and with Everett Golson returning, I no longer expected this kind of crap from Notre Dame Football.  They are too talented for this kind of stupidity.   I guess not.  Florida State and Alabama look like locks for the playoff.  Mississippi State, Oregon, and even Baylor still have some tough games to get through.  A loss from those teams and we have a major two loss team controversy on our hands.

Another 43 minutes for Kobe last night, and the Lakers lose again.  I’m sure Kobe and Byron Scott believe that he can just rest when he’s dead.  At this rate, that should be in the next two weeks.  When Nick Young returned, I was actually worried the Lakers might actually be good again, but if they can’t beat Denver at home, they really do stink.  I know it’s only natural to want the Lakers to win as a fan right now.  But the reality is we need them to lose, in order for them to keep their 1st round pick this year, rather than give it to Phoenix.  Without it, this team may get set back another 3 years.   A top 5 pick, to go along with Houston’s 1st round pick, a healthy Julius Randle, and two max salary slots in the summer of 2016 is a very good start to rebuilding this club.  The next 8 games will be a critical stretch in determining whether or not the Lakers really have a shot at keeping their 1st round pick.  Kobe is taking his anger out on everybody……….
Lebron is really happy right now in Cleveland……

So what’s really wrong with the Clippers?  If the playoffs started today, they would be watching at home just like you and me.  They are in the bottom 3rd in defensive field goal percentage, they are one of the worst rebounding teams in the league, and they really don’t have a single impressive win so far this season.  I admit that the West is competitive, but the sum of the parts just aren’t adding up for this team.  They also need more production out of the small forward position on both ends of the floor.  If this nonsense continues for the next 10 games, LA is going to need a trade to jumpstart this team, and actually play to their potential.  At some point when you don’t fulfill your potential, you become overrated.  The Clipps are slowly heading in that direction.

I’m totally alright with the Dodgers letting Hanley Ramirez sign with the Red Sox.  For 5 years and $90 million, he isn’t a National League player.  However, Andy Friedman and the Dodger front office is scaring me.  I don’t understand how a 39 year old reliever, and another 26 year old that had an ERA over 5 help improve their bullpen.  Also, in the last two weeks, we’ve heard rumor after rumor about the team looking to move an outfielder, or even two.  Matt Kemp’s name has been circulating the most.  I realize that trading Kemp would give LA the biggest return, but moving him would be idiotic.  Kemp is healthy again, and at full strength, he’s arguably the best hitter in the National League.  The remaining money left on his contract isn’t even that bad either.  The Dodgers seem so determined to get Joc Pederson in their lineup that they might recklessly trade two outfielders, while eating lots of salary.  When Pederson is in the lineup everyday hitting .200 next year, I’m sure they will regret this decision.  If Crawford or Ethier can be moved in a deal that makes sense, then great.  Otherwise, they shouldn’t just move them for the sake of clearing salary or roster space.  Sorry Mr Friedman, but this is actually how you operate in a big market, not a small one.

On to week 12 of the NFL, where I wish my fantasy football team played in the NFC South.  That way, I would be in first place with a mediocre record.  What an idiotic play by Shaun Hill throwing an interception at the end of the Chargers-Rams game.  That was an early Christmas present for San Diego.  There’s definitely something wrong with my CBS Sports app.  It’s telling me that the Raiders won a football game this week.  Yesterday looked like the end of RGIII’s football career with the Redskins.  I get the feeling the coaching staff was looking for a little more than 106 yards passing when his job was on the line.  The Broncos injuries are putting them in survival mode right now.  The Patriots are still in beast mode and don’t look like they’ll be losing anytime soon.  LeSean McCoy got angry yesterday, and clearly wanted to make a statement in the Eagles win over the Titans.  I almost forgot the Packers had a running game until yesterday.  That’s how good their offense has been.  The Cowboys are 8-3.  In perfect position to blow it in the last 5 weeks of the season.  How good was this catch by Odell Beckham? Then there’s this annoying dude in Detroit……

To the ice, where the Kings still haven’t figured out how to win on the road this season.  They’ve got a lot of points to make up in the ultra competitive Western Conference, but the bigger news last week was about defenseman Slava Voynov getting charged with assault.  Fortunately for LA, they were granted salary cap relief for Voynov’s suspension, and can add a player equal to his $4.1 million salary.  Make no mistake about it, the Kings are looking to move on from Voynov, and are in the market for a top defenseman now.  Whether Voynov is convicted or not, the NHL will probably not reinstate him.  Even if they did, he would likely lose his work visa in the US, which means he’s probably headed back to Russia.  Voynov can thank Ray Rice for ending his NHL career.

Finally, episode 7 of this season’s The Walking Dead aired on AMC last night.  Spoiler alert for those of you that have yet to see it.  Here’s a quick recap.  Rick decides to go with Darryl, Sasha, and Noah, while Carl, Michonne, and Gabriel stay back at the church.  Michonne tries to sympathize with Gabriel at one point, but he remains in solitude, and escapes from the church back into the woods later on.  He encounters a Walker he avoids, but cannot actually come to killing it.  Eugene remains unconscious, while Tara tries to give Abraham water and he refuses.  They have a confrontation, and Maggie interjects by threatening Abraham by pointing a gun at him.  Glenn, Tara, and Rosita head to a nearby creek to get supplies.  The three bond and get to know each other a little better.  When they get back Eugene begins to wake up.  Abraham now considers taking a sip of water because he doesn’t have to punish himself if Eugene is really alive.  Beth learns that Carol is in grave condition, and conspires with Lerner to get her the proper medication to survive, despite opposition from others in the hospital.  Rick and his crew take two officers from the hospital as hostages to start their rescue mission.  At the end of the episode, Sasha offers to eliminate the remains of a friend of the officer, only to have the officer slam her into a window and then escape.

This was a relatively restrained episode.  Watching the last scene was like watching a horror movie where you’re thinking “how stupid is this person for walking in a dark room where you know they are going to get murdered?”.  That’s exactly how I felt about Sasha, knowing that she was going to get attacked.  Maybe the craziest moment I’ve ever witnessed in the show was when Darryl ripped off the head of a Walker and bashed the cop over the head with it.  I actually had to rewind my DVR to make sure that really just happened.  What happened to Maggie saying that she and Glenn will never split up again?  Funny, because they just split up when Glenn went to go find some supplies.  Father Gabriel is just going to slow the group down and get somebody killed.  We’re going to be losing some characters next week, I’m just not quite sure who yet.  My first guess would be Beth.  Carol has had such an incredible character transformation, it would really be a shame for the show to lose her.  The mid-season finale is going to be huge. 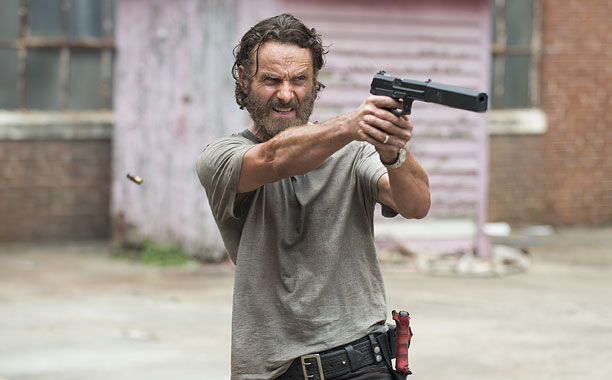